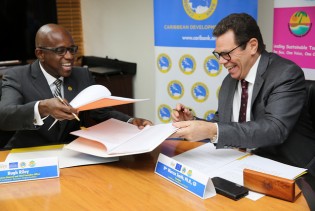 By Desmond Brown
From tourism-dependent nations like Barbados to those rich with natural resources like Guyana, climate change poses one of the biggest challenges for the countries of the Caribbean – and it hasn’t gone unnoticed by the region’s premier financial institution, the Caribbean Development Bank (CDB).

By IPS World Desk
With numerous challenges brought on by climate change, Caribbean countries are facing a dilemma. In Jamaica for example, the agriculture and water sectors are under increasing threat.

By Desmond Brown
The Caribbean has the unenviable reputation as one of the most disaster-prone regions in the world, a situation exacerbated by climate change and vulnerability that experts warn could have significant economic consequences if unaddressed.
ADVERTISEMENT ADVERTISEMENT