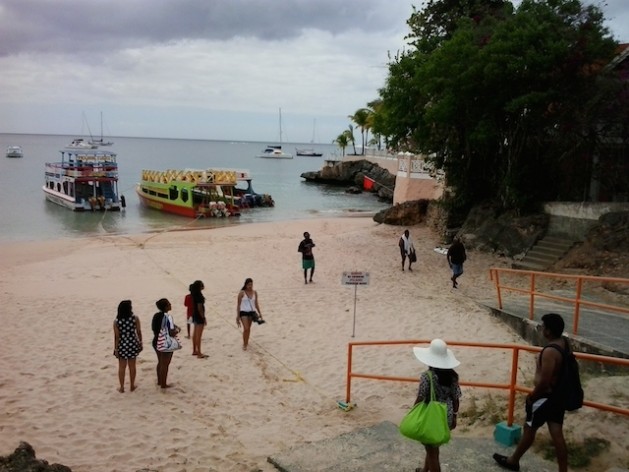 SCARBOROUGH, Jun 5 2014 (IPS) - An initiative to reduce the carbon footprint of Tobago’s tourism sector may be stymied by “bread-and-butter issues” and the failure of government authorities to vigorously pursue the initiative.

In 2012, the Caribbean Community Climate Change Centre (CCCCC) and the Inter-American Development Bank (IDB) completed a pilot project for the Caribbean Carbon Neutral Tourism Programme (CCNTP) in four Caribbean countries, including Tobago, with the aim of enhancing the tourism sector’s resilience to climate change,

However, the initiative in Tobago has borne little fruit, with some who work in the sector saying they learned about the programme only from media reports.

As it is now, everybody is going about business as usual. [Reducing carbon emissions] is not much of a concern. The greater concern is bread and butter issues." -- Dexter Black, president of the Reef Tour Operators

As such, tourism plays an important role in the island’s viability.

The tourism sector was the focus of the carbon neutral programme by the CCCCC “because of its economic importance to many of the Caribbean countries. The methodologies and lessons learnt under the program would be able to be applied not only to the tourism sectors of other countries but also to the other economic sectors,” the CCNTP project manager Earl Green told IPS.

“The specific objectives [of the carbon neutral programme] were to devise ways of attracting new sources of financing for (1) the scaling-up of low carbon investments in the tourism sector; and (2) reducing the sector’s vulnerability to climate change,” according to Green.

On the other hand, according to an e-mailed response to IPS by Patricia Turpin, Honorary Director – Environment, for the Tobago Hotel and Tourism Association, “The Tobago House of Assembly – Division of Tourism has not shown any commitment to a low carbon footprint.”

Turpin added that it would be left up to the private sector and NGOs to move forward with any carbon neutral tourism programme in Tobago.

Alvin Benjamin, a taxi driver operating in Tobago’s tourism industry, told IPS that he heard about the carbon neutral programme “only on the radio.” “I think it was a good idea, but I still was waiting to see what would be the outcome.”

He and Victor Emily, who founded the Royal Taxi service, said that some of the recommendations from the CCNTP were not feasible in Tobago.

One of the recommendations coming out of the CCNTP was the “structuring of operations in land based tours, whereby operators collaborate to share vehicles and associated costs [which] allows for a reduced number of trips of vehicles and also helps to reduce the environmental impact on the local destinations [which may be protected areas, eco-sensitive areas etc.].”

The report added, “This mode of operations is being piloted in islands like Tobago, and is currently in use in more established destinations like Miami.”

Emily told IPS that many taxi drivers work for themselves. “It’s not a case where taxi drivers are working for a company and they get a salary. You have to make your money so that pooling in the transporting of tourists would be a no-no.”

Black said he believes that “if everyone works together in a rotational system they could be allocated passengers,” instead of boats going out to Buccoo Reef without a full complement of passengers. “You could allocate passengers on a rotation basis where you have less boats going out. Instead of 10 boats you have three or four going and you will still have operators making more money because they have more passengers per trip.”

“As it is now, everybody is going about business as usual. [Reducing carbon emissions] is not much of a concern. The greater concern is bread and butter issues. But if people are sensitised and educated, they will respond. People are always willing to learn.”

Black said retrofitting of the boats used by operators for greater fuel efficiency, another recommendation of the CCNTP report, is indeed an option. He said he downsized the engine on his boat from a 75 hp to a 55 hp engine, “which burns half the amount of fuel” and takes just about two minutes longer to get from Store Bay to Buccoo Reef.

Black said that protecting Tobago’s environment “is very important, because Tobago promotes itself as an eco-friendly destination. We should strive to preserve what we have by producing fewer emissions.” However, he said, it was up to the island authorities to take the initiative on the matter, “so that everyone will fall in place.”

Gerard Alleng, an official of the IDB, which funded the pilot project of the CCNTP, told IPS that the programme would be helpful to islands when it came to branding their product.

“We are in a competitive environment and there is a lot of interest now by clients of tourism to be more conscious of the environment. If islands are able to transform their sector to a low-carbon sector, they would be able to attract those clients who are concerned about the carbon footprint, about climate change, about their impact on the environment.”

He said the carbon footprint assessment tool “was a way of giving these islands a tool they could use to move in that direction.”

There is also the issue of energy security, Alleng said. Since energy prices are high in the Caribbean, a low-carbon, more energy efficient tourism sector would bring “significant economic benefits.”