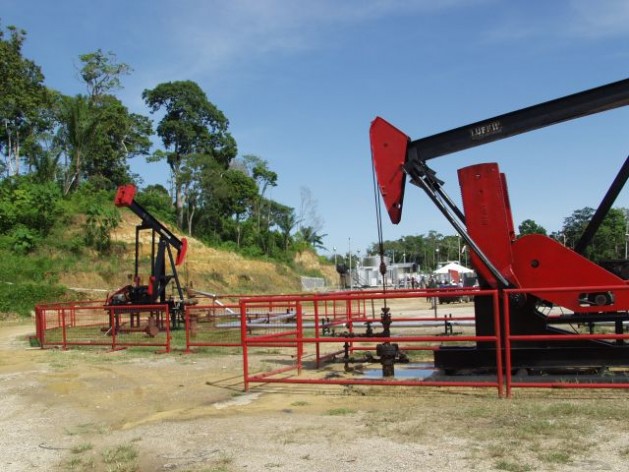 Petrotrin pumping jacks at its oilfields in Trinidad. Courtesy of Petrotrin.

PORT OF SPAIN, May 5 2014 (IPS) - Trinidad and Tobago holds the dubious distinction of being among the top 10 emitters of carbon dioxide per capita in the world, much of it due to the petrochemical industry that is the main driver of its economy.

According to the University of Trinidad and Tobago, the country’s petrochemical sector is responsible for 60 percent of those emissions.

"There are also positive social impacts through job creation and utilisation of services and materials from the local energy sector." -- Melissa Mohammed-Rajkumar

Melissa Mohammed-Rajkumar, a business analyst at the state-owned oil company, Petrotrin, told IPS that six percent of the country’s greenhouse gas emissions (GHG) are from its own operations.

But now Petrotrin is eager to reduce its carbon footprint.

It has succeeded in registering a Programme of Activities (PoA) project that would bundle together projects by several petrochemical companies in Trinidad and Tobago and require only one validation process for all of them – the first such project in Trinidad to be registered under the U.N.’s Clean Development Mechanism (CDM).

It seeks to reduce greenhouse gas emissions by recovering and utilising methane-rich natural gas currently vented in the fields.
This PoA project was registered with the CDM in August 2013.

Venting involves controlled release into the atmosphere of unburned gases that are a byproduct of oil production. The venting ensures that associated natural gas can be safely disposed of in an emergency.

Oil companies resort to venting when they cannot store or use gas commercially, to reduce the risk of fire and explosion.

Mohammed-Rajkumar, a member of Petrotrin’s CDM team, told IPS, “Sustainable development of the country will be enhanced by the project as valuable resources that would have been wasted through venting will contribute to economic development when captured and utilised for productive end-uses.

“There are also positive social impacts through job creation and utilisation of services and materials from the local energy sector,” she said.

The CDM, which operates under the auspices of the United Nations Framework Convention on Climate Change (UNFCCC), validates and subsequently certifies the effectiveness of projects in reducing carbon emissions.

Such certification can then be used as a basis for obtaining Carbon Emission Reduction (CER) credits that are sold to developed countries seeking to meet emissions reduction targets under the Kyoto Protocol.

The CDM has registered over 7,400 emission-reduction projects in developing countries since 2004 and generated over 1.2 billion emission credits. However, it has been jeopardised by a steep plunge in CER prices in recent years.

Trinidad and Tobago’s PoA is one of the few CDM projects in the English-speaking Caribbean to achieve registration.

Though some countries have expressed an interest in launching CDM projects that would reduce greenhouse gas emissions and thus make them viable players on the Carbon Emissions Reduction (CER) market, only four projects in the English-speaking Caribbean have achieved registration under the CDM – two in Jamaica, one in the Bahamas, and one in Guyana.

Of the 18 CDM-registered projects in the Caribbean, 12 are in the Dominican Republic and two are in Cuba.

There are two CDM-registered PoA projects in the Caribbean, the one in Trinidad and Tobago and one in Haiti.

Whereas the Wigton windfarm project in Jamaica has achieved a measure of success, the CDM project in Guyana has failed to achieve its targets under the CDM, according to Sharma Dwarka, the factory operations manager of Guyana Sugar Corporation Inc., otherwise known as GuySuCo.

Though the Caribbean is not a major source of GHG emissions, GuySuCo chose to get involved in the CDM because of its commitment to reduce its carbon emissions.

GuySuCo. chose to launch a bagasse cogeneration project under the CDM, Dwarka said, “because it fits directly into GuySuCo.’s operations. The processing of sugar cane to produce sugar produces bagasse [a fuel] which is utilised for power generation for the operations.

“The quantity of power produced from bagasse is more than adequate for the operations. As such, excess power is available for sale to the national grid.”

The hoped-for effect was the reduction of Guyana’s dependence on fossil fuels for energy and, hence, of its carbon emissions.

Unfortunately, Dwarka told IPS that there have been no financial gains to Guyana or GuySuCo. to date from registration with the CDM.

However, he said, “GuySuCo. remains committed to reducing its carbon emissions. Having identified the root cause of problems at the sugar factory, corrective action is currently being taken such that the factory can achieve the original design parameters.

“Once this is achieved, the cogeneration plant will be positioned to generate carbon emission reductions (CERs) and tap into the carbon credit market.”

Mohammed-Rajkumar told IPS that Petrotrin’s PoA project is now in the implementation stage. “Tenders have been issued and we are awaiting responses,” she said. The project is approaching its study and design phase.

Regarding funding, she said, “Commercial arrangements are in the process of being drafted and their form will depend on the outcome of the engineering estimates.”

The initial CDM project, in its first year of operation, is expected to remove approximately 90,000 tonnes of CO2 equivalent (tCO2e).

“For the next nine years, the project is expected to remove an average of 78,000 tCO2e per annum, but this estimate is subject to further engineering studies to be conducted.”

Mohammed-Rajkumar said that the initial phase will focus on its wells in the Fyzabad, Grand Ravine, Parrylands, Palo Seco and Barrackpore fields.

She said the company has no qualms regarding the project’s financial feasibility, even though prices on the European Union Emissions Trading Scheme market, to which it has access, are very low. It “is also exploring options in other markets where prices range from five to 10 dollars.”

“We can hold and trade the carbon credits when prices are higher,” Mohammed-Rajkumar said. “In any event, Petrotrin remains committed to implementing the CDM project because of the net environmental and social benefits to be derived.”