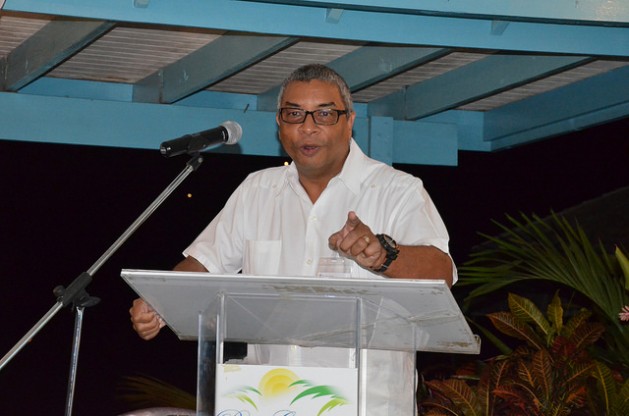 Dr. David Smith, coordinator of the Institute for Sustainable Development at the University of the West Indies (UWI), believes the Caribbean and other small states should look into payments for ecosystem services. Credit: Peter Richards/IPS

CASTRIES, St. Lucia, Apr 7 2014 (IPS) - Most Caribbean countries are famous for their sun, sand and warm sea breezes. Far fewer are known for their wide use of solar, wind and other forms of renewable energy.

It is one of the failings of the region, which is characterised by high external debt, soaring energy costs, inequality, poverty and a lack of human capital.

The 53-member Commonwealth grouping is now trying to fill this knowledge gap with a new green growth analysis that circulated at last week’s third Biennial Conference on Small States in St. Lucia, although the formal launch is not until May.

Titled “Transitioning to a Green Economy-Political Economy of Approaches in Small States,” the 216-page document provides an in-depth study of eight countries and their efforts at building green economies.

Dr. David Smith, one of the authors, notes that none of the eight, which include three from the Caribbean – Grenada, Guyana and Jamaica – has managed on its own to solve the problem of balancing green growth with economic development.

The other case studies are Botswana, Mauritius, Nauru, Samoa and the Seychelles.

“What is useful about this book is that rather than have us just looking inside our own borders for solutions, we can look at other people’s solutions – or indeed other people’s mistakes – and learn from those and try to tailor those to our own situations,” said Smith, the coordinator of the Institute for Sustainable Development at the University of the West Indies (UWI).

Smith said that all the countries studied revealed that high dependence on imported energy and its associated costs are major factors constraining growth of any kind. Progress in greening the energy sector would have the great advantage of benefitting other sectors throughout the economy.

“Within our constraints we have to try and change that. We have to try and make sure we are much more energy sufficient and our diversity in terms of our sources of energy is increased,” he said. 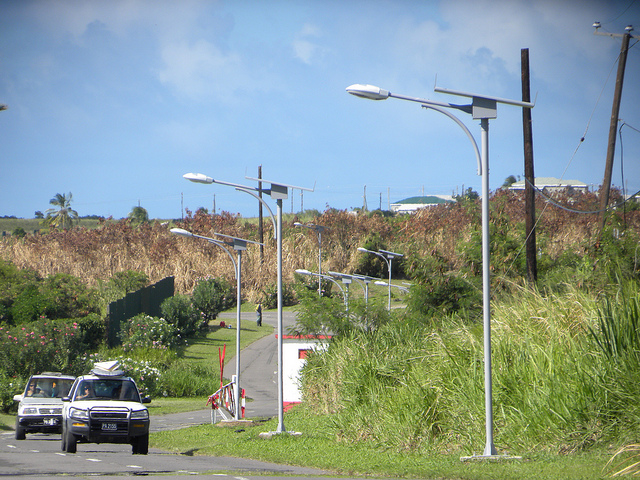 St. Kitts residents welcome solar streetlights in areas they say have been dark and prone to crime. Credit: Desmond Brown/IPS

Grenada’s Prime Minister Dr. Keith Mitchell wants his country to become a “centre of excellence” for a clean and green economy that will result in the dismantling of an electricity monopoly with a high fossil-fuel import bill.

He said that despite help under the Venezuela-led PetroCaribe initiative – an oil alliance of many Caribbean states with Caracas to purchase oil on conditions of preferential payment – Grenada has one of the highest electricity rates in the region.

“We are now engaging with partners on solar, wind and geothermal energy to make Grenada an exemplar for a sustainable planet,” he told IPS.

Mitchell believes that the Small Island Developing States (SIDS) conference in Samoa this September must advance small states’ quest for energy that is accessible, affordable and sustainable.

“The threat of climate change is real and poses a clear and present danger to the survival of SIDS. We call on the international community to release long-promised resources to help small states like Grenada move more rapidly on our disaster risk mitigation and reduction efforts,” he added.

Last month, the University of Guyana announced that it was teaming up with Anton de Kom University of Suriname (AdeKUS) and the Beligium-based Catholic University of Leuven to be part of an 840,000-dollar programme geared at capacity-building in applied renewable energy technologies.

The overall objective is to improve the capacity of the Universities of Guyana and Suriname to deliver programmes and courses with the different technologies associated with applied renewable energy.

Natural Resources and Environment Minister Robert Persaud says that one of the biggest needs for the local manufacturing sector is the availability of cheap energy.

“For us, it is an economic imperative that we develop not only clean energy, but affordable energy as well, and we are lucky that we possess the resources that we can have both,” he told IPS. “The low-hanging fruit in this regard is hydro.”

When he presented the country’s multi-billion-dollar budget to Parliament at the end of March, Guyana’s Finance Minister Dr. Ashni Singh said that with the intensification of the adverse impacts of climate change, the government would continue to forge ahead with “our innovative climate resilient and low carbon approach to economic development backed by our unwavering commitment to good forest governance and stewardship”.

Guyana has so far earned 115 million dollars from Norway within the framework of its Low Carbon Development Strategy (LCDS). Singh said that this year, 90.6 million dollars have been allocated for continued implementation of the Guyana REDD (Reducing Emissions from Deforestation and Forest Degradation) + Investment Fund (GRIF).

“Guyana is on track to have the world’s first fully operational REDD+ mechanism in place by 2015. This will enable Guyana to earn considerably more from the sale of REDD+ credits than we do today,” he told legislators.

But the case studies showed that locating suitable and adequate financing for greening was a major constraint, even in those countries that had allocated government resources to green activities.

The study on Jamaica for example, noted that the country is still dependent on natural resource-based export industries and on imported energy, with debt servicing equalling more than 140 percent of gross domestic product (GDP). It said all these factors also contributed to constraining implementation of new policies.

With regard to financing, Smith argues that it wouldn’t be a bad idea for the World Bank to consider allowing countries to access concessional financing up and until their human development index hits 0.8.

“We want to look at renewable energy and lower cost energy. We want to make sure that the human and environmental capitals that we have within our countries are maintained,” he said.

Smith said the countries could look at the payment for ecosystem services, charging realistic rents for the use of their beaches and looking at ways debt can be used creatively.

He believes that the repayment should “not always [be] to reduce the stock of debt but at least to use the payments for something that will build either human capital or financial capital…that can be used for real growth and development.”