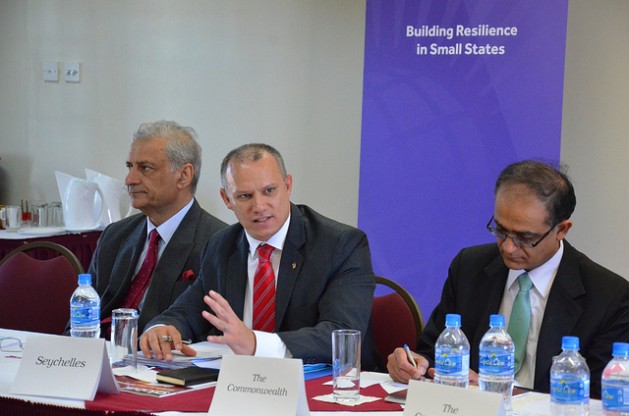 CASTRIES, St. Lucia, Mar 31 2014 (IPS) - As they fine-tune preparations for the Small Island Developing States (SIDS) Conference in Samoa and the United Nations post-2015 development framework meeting in September, Commonwealth states are focusing on getting the international community to pay more attention to the challenges they face.

“One of the key reasons that climate change is actually a substantial topic in terms of the international arena is because of the advocacy of island states,” Seychelles Foreign Minister Jean Paul Adams told IPS at the 53-member Commonwealth‘s third Biennial Conference on Small States last week.

"We are vulnerable, but we are not weak." -- Seychelles Foreign Minister Jean Paul Adams

“I think we are vulnerable, but we are not weak. We’ve got a lot to offer, we have a lot of strengths and we must use those strengths,” he said.

“Exposure to environmental shocks, together with the deeply integrated nature of small states’ economies, social wellbeing and the natural resource base, make environmental management an important element of resilience building in these countries,” the Commonwealth said in an outcome statement.

It said the meeting shared ideas on environmental governance indicators for resilience-building and reviewed approaches to ocean governance to maximise the benefits accruing to small states from their extensive marine areas.

St. Lucia’s Foreign Minister Alva Baptiste said it was impossible to speak about development “if we do not consider sustainability and protecting our patrimony for succeeding generations.

“Less than 20 years ago, some of the most powerful nations on the planet were trying to dodge the warnings about climate change because they felt it was a problem of poor countries, but today as the devastation of climate change continues its decimating march across Europe, North America and other parts of the globe, the inescapable reality seems to be finally hitting home,” he said.

“So America has acknowledged that colder winters are not climatic accidents. Russia has accepted its warmer winter as a phenomenon of climate change, and Europe has recognised its wetter rains as climate change in action,” he said.

“There must be a recognition, especially among the richer nations, that regardless of our GDP (gross domestic product) status, we are resource-poor and in need of financial resources to undertake resilience-building work,” he said.

Delegates also highlighted the need for ocean forecasting to predict impacts from climate change; action on land-based sources of pollution; and efforts to strengthen oceans and seas issues in the Third International Conference on SIDS process (SIDS 2014).

Secretary General Kamalesh Sharma said the London-based Commonwealth Secretariat has the capacity to represent small island states within the international community on their concerns.

“The Commonwealth is the preferred interlocutor for the group of 20 working group on development and they look forward to all the input that we can bring from the outer world,” he told IPS.

Sharma said the grouping is in the process of developing a financial instrument that would stem the economic “free-fall” of any economy should it suffer from the downsides of global development.

“The instruments that we are developing now…are both on the concept of resilience as well as the practical tool kit for various types of counter cyclical loans; which means that once an external shock is experienced, your financial obligations get naturally and immediately readjusted’, Sharma said, hinting at a debt swap for climate change, “a practical suggestion now being considered by the international community at large”.

Adams said that small island states are among the first to feel the impact of climate change “whether it be through extreme weather events or sea level rise or other issues that affect basically how we are able to create wealth that can be shared amongst our people.

“We don’t have huge natural resources that we can suddenly start exploiting. We don’t have huge populations to get economies of scale so we have to look at the things that we are able to offer…and create a framework which is more conducive for those issues,” he told IPS.

Recalling the devastation caused by heavy rains to his island, Dominica and St. Vincent and the Grenadines over the Christmas holidays, St. Lucia’s Prime Minister Dr. Kenny Anthony said the question remains how much longer small states will have to lobby for an internationally accepted differentiated approach to aid for small states.

“You can turn to Grenada with Hurricane Ivan in September of 2004, where damages were well over a billion U.S. dollars, or nearly 200 percent of GDP,” he said. “You can go through nearly all the islands of the Caribbean and you would see the impact of such extreme weather events.”

The problems confronting the region are not limited to extreme weather events, he noted. Last week, the regional countries participated in a simulation for a tsunami.

“We have seen the earthquake destruction of Haiti in the year 2010 and the volcanic disaster of Montserrat. We have been warned to expect a ‘big one’, an earthquake of immense destructive power,” he added. “In response to these calamities, the pledges are often many; the delivery of the promises, not so many.”

He said the realities of climate change must catapult small states to be leaders in climate change adaptation, “because we exist largely as coastal populations threatened by sea-level rise, the bleaching of coral reefs and the desertification of some territories.”

“The economic and environmental imperative is that we commit more forcefully to renewable energy and energy efficiency,” Anthony said.