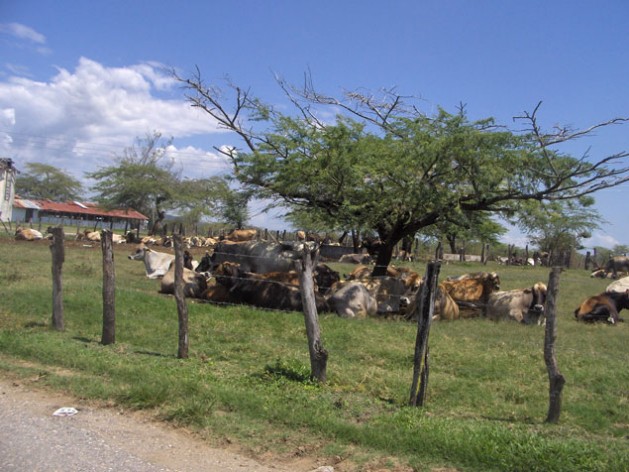 Cows take refuge from the sun under a tree at the Bodles Agricultural Station in Jamaica. The drought caused millions of dollars in losses for farmers who had no water. Credit: Zadie Neufville/IPS

As temperatures exceeded 93.7 F (34.2 Celsius) in several areas, the Meteorological Service urged Jamaicans to “Wake up to the realisation that climate change is already a fact of life.” Some of the hottest days on record had been recorded in July with even higher temperatures predicted for August.

With storage running low and an expectation that conditions would exceed the drought of 2014, the National Water Commission (NWC) began its annual restrictions and rolling lock-offs. In 2014, thought to be Jamaica’s worse drought in more than 30 years, rainfall averaged 2 to 12 percent in the most affected areas.

As the NWC scrambled to reactivate out-of-use wells to ease the shortages, many called for the dredging of dams and reservoirs to increase storage capacities. Environment, Water and Climate Change Minister Robert Pickersgill announced a ‘prohibition notice’ with a penalty of up to 30 days in jail for “anyone caught using the precious liquid for anything other than household and sanitary use. “ For the first time Jamaica had attached enforcement penalties to water restrictions.

Kingston, one of the areas most affected by lock offs, sits on an abundance of tainted water in underground aquifers. But the capital city’s large untapped water source represents only a portion of the vast reserves that experts say remain under-exploited.

According to the Water Resources Authority (WRA), the island’s water management and regulatory body, Jamaica uses only 25 percent of its available groundwater resources and 11 percent of its accessible surface water.

Head of the WRA Basil Fernandez told IPS that it would take “proper water planning to deal with non-revenue water and improve transmission and distribution efficiency,” to solve the problem.

“There is need for a roadmap from the NWC and/or the Ministry on water supply planning that will set out clearly the areas of deficit, areas of surplus and how and when we will move from surplus to deficit areas,” he said.

Across the country households cleared their inventories of water tanks, manufacturers increased production and hoteliers tapped into their storage tanks. Fires and the unrelenting sun destroyed the rain-fed farms with prized Blue Mountain Coffee crops, vegetable crops and Christmas trees that are grown in the buffer zone of the Blue Mountain National Park.

Lower down the slopes, fires also destroyed mature trees and vegetation in the Hope River and Yallahs Watershed areas, which supply 40 percent of NWC’s 600,000 customers in the Kingston Metropolitan region. Much of the area had been replanted between 2011 and 2013 as part of Jamaica’s Climate Change Adaptation and Disaster Risk Reduction.

Under the project, the Forestry Department replanted more than 300,000 hectares of forests in degraded upper watershed areas to reduce run-off, erosion and silting of the waterways.

As water restrictions widened, farmers on the plains fared no better. The usually six-month long sugar cane harvest was over in less than a month after fires and drought decimated the crop. The Rural Agricultural Development Authority (RADA) reported that the drought was most severe in Manchester and St. Elizabeth the ‘bread basket’ areas that accounted for about 40 percent of domestic agricultural production. In other areas crops wilted in the fields.

Scientists are predicting that these episodes are expected to worsen as climate change increases the intensity of droughts across the Caribbean. Thompson agreed, noting that the unseasonably dry periods are happening in the midst of the Atlantic Hurricane season that runs from June 1 to November 30.

Unless there is rainfall and constant inflows of water, the volume of water will not significantly increase, Fernandez, told IPS, effectively dismissing calls for more dams and the de-silting the Mona Reservoir and Hermitage Dam.

As part of Jamaica’s Vision 2030, to make the country more resilient to the impacts of climate change, Government has begun work to protect and better manage the distribution of water. At risk are the nation’s health, the tourism and agricultural industries and Jamaica’s food security.

In the last year, 25 water and sewage projects were completed to upgrade then old, leaky infrastructure which when coupled with theft, costs the NWC about 53 percent or 108 million liters of its daily production in the Kingston Metropolitan Area alone.

A 3.9 million dollar Watershed Management project funded by the Inter-American Development Bank through the Global Environment Facility (GEF) is expected to, among other things, improve water resource management in the Yallahs and Hope River watersheds. The five year programme is to carry out work on 44,486 hectares of land including sections of the region’s newest World Heritage Site, the Blue and John Crow Mountains National Park.

An Artificial Aquifer Recharge facility to secure the sustainable abstraction of water from the aquifer by treating and returning excess water into natural underground storage is ongoing.

“This is a pioneering project, as it has never before been carried out in Jamaica or the Caribbean,” Pickersgill said at the July 2014 launch.

In addition, Government is also looking at plans to recover some of Kingston’s water that has been polluted by faecal bacteria from soak-away pits, latrines and saline intrusion.

The key to making the country resilient Fernandez said is “the preparation of communities and agencies to manage and conserve the resources; efficiently moving water from the north to the south of the island and a move to larger more efficient and resilient distribution systems.”

As Thompson explained, “So the droughts will be more severe, the rainfall episodes will be more significant, causing flooding. There will still be the need to work out how we manage the water resourced in between those episodes.”