This article is the first of a two-part series on reconstruction in Haiti four years after the earthquake, and the ongoing housing crisis. 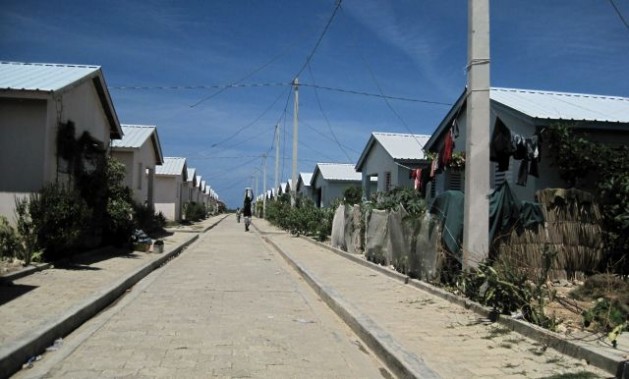 Who lives in them? Who runs them? Can the residents afford the rents or mortgages? Are the residents the actual earthquake victims?

“Nobody is in control over there. People just seized the homes." -- Miaud Thys

By some estimates, the catastrophe killed 200,000 people and made 1.3 million homeless overnight by destroying or damaging 172,000 homes or apartments. But the new projects do not necessarily house earthquake victims, over 200,000 of whom still live in tents or in the three large new slums.

In total, the new projects, with homes for at least 3,588 families, cost 88 million dollars. (In contrast, international donors and private agencies spent more than five times that amount – about 500 million dollars – on “temporary shelters” or T-shelters.) See HGW #9

Three of the new housing projects are in Zoranje, a new settlement not far from downtown, on the border between Cité Soleil and Croix des Bouquets. The fourth is at the foot of Morne à Cabri, about 25 kilometres north of the capital on the highway that leads to Mirebalais. (Read Part Two)

One of the first projects approved by the Interim Haiti Recovery Commission, the Expo cost over million dollars in public reconstruction money. Foreign and Haitian construction and architecture firms also spent at least two million dollars more. The objective was to provide models for the agencies and businesses engaged in post-earthquake housing construction.

Everyone agrees the Expo was a failure. Few visited the site and fewer still chose one of the model homes – many of which were very expensive by Haitian standards – for their project. See HGW #20

“There were some really odd examples,” according to David Odnell, director of the government’s Unit for the Construction of Housing and Public Buildings (UCLBP), one of three government agencies involved with housing. “Some had nothing to do with the way we Haitians live or think about housing. It was a completely imported thing.”

Today, surrounded by weeds and goats, the fading and cracked houses are home to dozens of squatter families.

“All the houses have new owners. They have been taken over,” explained a young pregnant girl who said her parents are “renters.”

“Yes, that’s possible,” Odnell, an architect, said in a Nov. 19, 2013 interview. “And you know why. There is a void… and there is no authority there. But [the project] is not exactly a waste. I could call it poor planning, because the houses can always be recuperated.”

Odnell’s counterpart at the government Fund for Social and Economic Assistance agency (FAES), a government office also involved in housing, said much the same thing.

“Aside from the inauguration week, the project has been forgotten,” Patrick Anglade explained. “It’s a problem that can be solved, but we have to figure out how to do that.”

The director of the third government housing agency, the Public Enterprise for the Promotion of Social Housing (EPPLS), had little to say. (“Social housing” is known as “subsidised” or “public” housing in English.)

“We have nothing to do with that,” director Miaud Thys told Haiti Grassroots Watch (HGW).

Anarchy reigns in the House(s) of Chavez

Another new project sits across the street from the Expo: 128 apartments built by the Venezuelan government for 4.9 million dollars (according to its figures) during the Hugo Chavez presidency. They are usually called “The Chavez Houses.”

Earthquake-resistant, sporting two bedrooms, a bath, a living room and a kitchen, and painted in bright colours, today most of the homes house people who simply broke down the doors and moved in. Only 42 of the 128 have “legal” inhabitants: families invited by the Venezuelan Embassy. Empty for 15 months, some were vandalised. Fixtures, toilets, sinks and other items, including water pumps, were stolen. See HGW #12

“Nobody is in control over there. People just seized the homes,” Thys admitted to HGW. “We know that. Now we are trying to recuperate them.”

Surrounded by neighbourhood men, Jules Jamlee sits on a broken chair across the street from a home that is being expanded. Like his friends, he is insistent about his right to “his” home.

“The president knows very well that we are revolutionaries,” he said. “He might make threats but he knows we don’t agree with them.”

Told of the residents’ insistence, Thys had a response: “Revolutionaries or not, we are not going to lose those apartments. We are going to send those people letters and invite them to leave so that we can recuperate them. Today we are starting with the carrot. We’ll use the stick later.”

The housing development still lacks water and residents complain that the lack of adequate water means that the toilets don’t work well. Many residents instead use nearby weedy areas for their physiological needs.

Known as the 400% or “400 in 100” project because Martelly promised 400 homes in 100 days, the nearby 30-million-dollar project funded by the Inter-American Development Bank was inaugurated on Feb. 27, 2012. The development has three kilometres of paved streets, a water system (which lacked water until just recently), an electrical system, street lamps and a square with a basketball court.

“Everything was in place so that residents would have all the basic services. In that sense, we proved that in a short time and with minimal funding, we could do well,” Anglade explained in an Oct. 2, 2013 interview.

But not all of the new residents are earthquake victims. Many are public administration employees. There was a rush to fill the houses at the beginning. And there are other complications, because the houses are not gifts. Residents must pay a five-year mortgage.

“During the first phase, and because we were in a hurry… we weren’t that choosy. Some people who got housing do not actually have the means to pay for it,” Anglade admitted.

The mortgages are between 39 and 46 dollars per month. The contract says that “non-payment by the renter/beneficiary for three consecutive months will result in a 5% penalty for each unpaid month” and that “non-payment could lead to expulsion.”

The contract has caused a great deal of grumbling.

“The president did not give us a house. He is selling it to us. They are too expensive. What can a person do in this country where there is no work? How can one find 1,500 gourdes (39 dollars) each month?” asked Yves Zéphyr, an unemployed father of two who has lived in the development since November 2012.

FAES admits it faces a challenge.

“We are not achieving 100 percent payments, not even 70 percent,” Anglade said. “At least 30 percent are behind.”

A small poll by HGW gives an idea of why some people are behind. One-half of 10 residents questioned said they are unemployed.

When the project was launched, the government received financing to prepare the land, build the houses, and set up the electricity system, but not for the actual services necessary for a housing development, like water, septic system cleaning, a marketplace, schools, a clinic and affordable transportation to downtown.

“The project isn’t finished yet,” Odnell noted. “The government needs to continue working, in order to improve the lives of the people there. Normally when you plan a housing development, all of the services are supposed to be in place and the houses come at the end. But just the opposite happened with the 400% development.”

While many residents say they are happy with their new homes, HGW found problems. Some roofs leak every time it rains, and residents say electricity is rare. Some of the houses had been vandalised before residents moved in: tin roofs and toilets had disappeared.

Also, the septic systems for some of the houses are causing problems.

“They fill up in a quarter of an hour!” claimed André Paul, who has lived in “400%” since July 2013. “Some of them are completely blocked, others are just totally filled.”

EPPLS, which shares responsibility with the FAES for the site, recognises that the septic systems were “poorly built.” Director Thys promised: “We will correct them” although he was not sure how that would be funded.