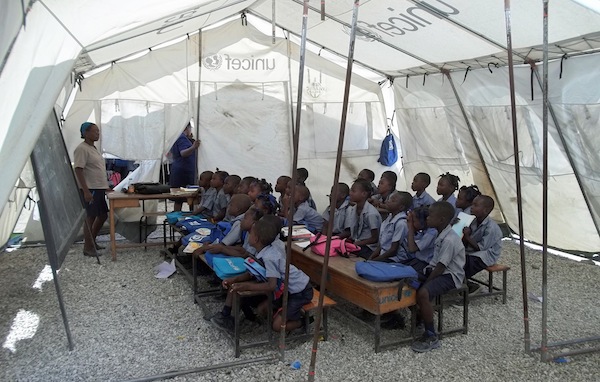 PORT-AU-PRINCE, Feb 17 2013 - Ever since his election in 2011, Haitian President Michel Martelly has touted his “free school” program as one of the government’s major accomplishments. “A victory for students!” banners and posters boast.

The Program for Universal Free and Obligatory Education (Programme de scolarisation universelle gratuite et obligatoire – PSUGO) is a program that costs 43 million U.S. dollars per year and aims to send over one million young Haitians to school every year for five years.

A two-month investigation by Haiti Grassroots Watch (HGW) in Port-au-Prince and Léogâne, however, found more children in school but also discovered a long list of unkept promises, inadequate funding levels, late payments and even suspicions of corruption.

“In my opinion, the PSUGO is a failure!” exclaimed Jean Clauvin Joly, director of the Centre Culturel du Divin Roi, a private school in Croix-des-Bouquets about 15 kilometres north of the capital of Port-au-Prince. “Last year, we suffered under that program. One of the many terrible things was that we were paid late. Thanks to the delay, a lot of our teachers quit.”

Despite the issues of fraud, late salaries, and the non-delivery of school supplies and books, the Martelly government does appear to send some young people to school, even if the exact number is unknown. But what kind of school, for what kind of education, and for which children?

By comparison, one year of primary school at the Lycée Alexandre Dumas, one of the country's best French system schools, costs over 100,000 gourdes (2,389 U.S. dollars) for a year or about 625 gourdes per day - over 600 times the PSUGO public school price per day, and almost 30 times the PSUGO private school price. This figure does not include health insurance, book rental fees and school supplies.

CNEH's professor Delouis explained, "In the private sector, there are many categories of schools. There is the category for the rich people (there are few of these but they are the best), one for the poor, one for those who are extremely poor, and one for those who are just coping… when in fact a school should be a place where all levels of society mix."

Professor Haram Joseph, director of a school in Darbonne, is despondent.

"In my opinion, if the government continues the way it has started, we will have a lot of school directors with full pockets, but children who don't know anything," he said sadly.

At Joly’s school, first and second graders share the same room and the same teacher, Francie Déogène. A thin sheet of plywood that also serves as a “blackboard” separates her classroom from others. Dérogène doesn’t have a desk. She piles everything on a plastic chair. Facing her, on four benches, ten students repeat together “a pineapple, a melon…” This is a writing course.

‘The state guarantees the right to education’

During the 2011 presidential elections, “lekòl gratis”, or “free school”, was a favourite refrain of singer-candidate Joseph Michel Martelly. But in Haiti, the guarantee of free education is not just a politician’s promise; it is an obligation. According to the Constitution, the state “guarantees the right to education… free of charge”.

The PSUGO program aims to keep that promise by paying school fees for primary school children: 250 gourdes (about 6 U.S. dollars) for public school students and about  3,600 gourdes, or 90 U.S. dollars, for those at private school. (In Haiti, slightly more than 80 percent of schools are private.) PSUGO is also supposed to open new schools and ensure that students have supplies and books and that teachers are properly trained.

The government claims 1,287,814 new students are in school this year through the PSUGO program, an impressive number considering that Haiti has only about 3.5 million young people aged 14 and under. HGW was not able to confirm this figure and has reason to doubt it, first and foremost because it is only one of many.

HGW did not have access to the PSUGO budget, nor could it visit all of the 10,000 schools allegedly inscribed in the program. But journalists did visit 20 schools, most of them staffed by angry or frustrated teachers.

Jean Marie Monfils, a teacher and also the director of a school in Léogâne, about 30 kilometres west of Port-au-Prince, is furious about PSUGO’s false promises. “They talked about a uniform, about hot lunches, and other things. But from where I am sitting, I can say we haven’t gotten hardly anything. We are the ‘forgotten’ of Léogâne.”

Monfils’ experience is not unique. Hercule André, a man in his fifties who directs a public school in Darbonne, outside Léogâne, lauds the initiative but adds, “The only benefit that the students get is that they don’t pay anything. Apart from that, there’s nothing. The students come to school, but they don’t have the books that were promised so that they can follow courses.”

HGW’s investigation in the capital and around Léogâne discovered that only two of the 20 schools visited reported receiving school supplies and books. As of late November 2012 – ten weeks after classes had started – only one of the 20 schools reported having been paid for the current school year, and 16 out of 20 said the school still had not received the final payment for the previous school year.

“I can’t even tell you if we are part of the program or not,” Monfils admitted with an air of desperation. “At the moment I am speaking to you, we haven’t gotten anything from the authorities. It’s a really huge problem, because many of the schools that signed up with PSUGO haven’t even gotten what was due them for the 2011-2012 school year.”

“The fact that the government hasn’t disbursed the money on time has been a big problem for school directors, who haven’t been able to pay their teachers,” reported Edith Délourdes Delouis, teacher and CNEH General Secretary.

Apparently, the government has also been unable to supervise new teachers to the degree it claimed it would. Despite the announcement that 2012-1013 would see a “turn towards quality” with more supervision, directors of schools visited by HGW said they could do virtually whatever they want. Of 20 schools visited, 25 percent had not received a single visit and another 24 percent had received only one.

Guillaume Jean, director of the Collège Chrétien in Léogâne confirmed, embarrassed: “We haven’t gotten many visits. They just call to get information.”

Perhaps because of its large size and even larger budget, the PSUGO program appears to have attracted cheaters.

In July 2012, a regional MENFP official in Port-de-Paix allegedly stole over five million gourdes (over 119,000 U.S. dollars). According to media reports, he used a group of young men as fake “school directors”, and wrote them checks of 200,000 and 300,000 gourdes. The official implicated fled to the Dominican Republic.

HGW does not have the means to investigate potential PSUGO fraud at the national level, or even in the capital. However, journalists did discover one school name on the MENFP list as having received payments, even though it had never functioned.

“Soon – the Justin Lhérisson College!” a small dusty sign announces on the Darbonne road near Léogâne.

“That was a project one of the local mayors set up when he was a candidate,” a neighbor claimed. “Once he got elected, he dropped it.”

A study from the Civil Society Initiative (CSI) last year concluded that the program had created number of “phantom schools”.

“We discovered that a third or a quarter of the schools being paid by the government hadn’t even been officially approved,” CSI Director Rosny Desroches, a former minister of education, told HGW.

At another school with both PSUGO money and foreign assistance, it’s almost noon. Under a blazing sun, scores of students focus on their work. The Charlotin Marcadieu national school was destroyed in the 2010 earthquake and today functions in 14 tents arranged in three rows. Gravel crunches under students’ feet. Before heading into his “classroom”, one of the teachers says bitterly, “After 10 in the morning, these tent-rooms are like furnaces.”