This is the second of a two-part series on the PRODEP community development project in Haiti. 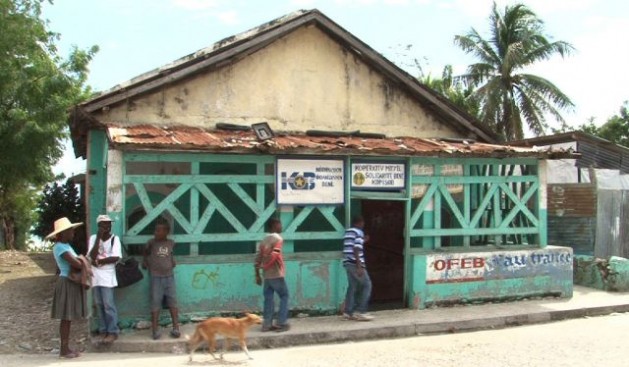 PORT-AU-PRINCE, Jan 11 2013 - A World Bank-funded community development project in Haiti appears to have inadvertantly harmed or even dissolved some of the grassroots organisations it was designed to strengthen.

As World Bank economists Ghazala Mansuri and Vijayendra Rao note in their work (See Sidebar 2, Criticism for CDD, and research here, here and here), the people and organisations that tend to benefit the most from “community driven development” or CDD projects in poor countries are those who already enjoy privilege and power at the local level.

The PRODEP project was never intended to do strictly development work; it also aimed to calm the country and to create a decentralised, non-governmental development “structure.”

“PRODEP began after all the political turbulence in the country,” explained Rincher Fleurent-Fils, coordinator of PADF/PRODEP’s technical office for the Southeast Department, in Jacmel. “The concern was to create social peace.”

This claim is substantiated a key document written by the World Bank and other major players following the illegal overthrow of President Jean-Bertrand Aristide in 2004.

The Interim Cooperation Framework (ICF) – released in July 2004 by the World Bank, the United Nations, European Union and Inter-American Development Bank – is a policy document meant to guide the “transition” from the illegal removal of a head of state to a democratically elected government.

“The ICF is inspired by lessons learned in similar needs identification exercises in post conflict countries, such as Afghanistan, Iraq, East Timor and Liberia,” the authors note, equating the relatively peaceful Haiti with war-torn countries.

Among other actions, the 89-page document recommends “rapid impact” development “interventions” outside local government structures, which the ICF calls “weak.” Instead, it says, funders should “establish… decentralized participatory structures” with the help of “specialized local national organizations using a participatory approach in accordance with models already tested in Haiti.”

“Where organizations do not exist, they will be created,” the ICF says.

According to the World Bank’s own reports, PRODEP created at least 232 new organisatons and then built them into regional committees [originally called “COPRODEPS” and now called “CADECs”] and department-wide federations.

“The goal is for the COPRODEP to mature from a project-specific tool into a locally driven self-sustaining community institution,” a 2010 World Bank document notes, saying they are being encouraged to be “independent non-profit associations that may later develop into Non-Government Organizations (NGOs) with the capacity to support local public institutions, projects, and programs.”

“It’s a little revolution taking place at the departmental level today,” boasted Arsel Jerome, who heads up PRODEP for PADF. “The big challenge for us is to institutionalise PRODEP and for the (committees) to become permanent local structures that run all local community development activities.”

Thanks to PRODEP, the “Republic of NGO” structure now reaches into Haiti’s furthest hills and valleys.

“A few wealthy, and often politically connected, men – who are not necessarily more educated than other participants – tend to make decisions at community meetings,” the researchers write in their June 2012 paper “Can Participation Be Induced?”

This phenomenon is known as “elite capture” and was listed as a risk in early PRODEP documents. While Haiti Grassroots Watch (HGW) could not conduct a complete survey of the Southeast department projects, anecdotal evidence and many interviews suggest ample “elite capture”.

“When someone gets a project, they do it not only to make money, but also, they immediately start making plans to become mayor or deputy,” reported elderly farmer Elace Dirou, a well-respected member of Kòdinasyon Oganizasyon Bene (KOB) or Coordination of Bainet Organisations.

Astoundingly, PRODEP’s national director boasts about the phenomenon. At a press conference last July, Michael Lecorps told reporters, “There are a lot of people who became deputies because of PRODEP. They created platforms, they became leaders.”

While Lecorps may see the use of World Bank dollars to consolidate political fiefdoms as positive, others associated with PRODEP – even those sitting on the local community committees that approved the projects – do not.

Farmer Emile Theodore, from Anba Grigri where HGW investigated PRODEP projects, deplored this construction of “political capital” as well as the sudden birth of dozens of “organisations” created solely to go after the funding.

“The fact that there was 17,500 dollars for small projects meant that a lot of organisations got created so they could get those grants,” Theodore told HGW.

In the Bainet region, the PRODEP method appears to have also hurt authentic or what Mansuri and Rao call “organic” grassroots organisations. KOB’s Dirou lamented that “when these projects come into our communities, they actually destroy organisations. They make people become enemies. People that used to share what little they had – salt, matches, etc. – now turn their backs.”

Dirou, also said that KOB – founded in 1990, just after the end of the Duvalier dictatorship – decided not to participate in PRODEP when it realised such social and political reengineering might result.

Writing in 2011, Mansuri and Rao partially corroborate Dirou’s claim, noting that in areas where CDD projects have been run, “some evidence points to a decline in collective activities outside the needs of the project.”

“Induced participation” is not the same as homegrown, they note, since organisations that “arise endogenously” are part of social movements, while “induced” ones tend to organise because they are seeking “cash and other material payoffs”.

Anthropologist Mark Schuller has been documenting such societal changes in Haiti since 2001.

A professor at the University of Illinois as well as the State University of Haiti, and author of the recently published book “Killing With Kindness – Haiti, International Aid and NGOs”, Schuller said, “With the influx of NGOs and projects, people lose their sense of solidarity, of working together. I think this is one of the most direct effects NGOs have had here. NGOs are based on contracts, on money, on ‘what can you do for me?

“There are a lot of organisations founded to channel funding from ‘NGOs,’” he added. “You could call those organisations ‘fake’’ or maybe ‘pocket organisations,’ because they have a piece of paper in their pocket that says they are an organisation, but for the majority of the population, they don’t really exist.”

Schuller also deplored what he sees as dependency and loss of self-reliance: “Because foreigners are the ones helping, after a while, people even cease to believe in Haitians! They say ‘Haitians can’t do anything’ because the NGO is doing all the work in their neighbourhood.”

One of the other questionable outcomes of the PRODEP system is what appears to be a deliberate undermining of what is often called Haiti’s “failed” state.

For decades, development and emergency funding has mostly bypassed the Haitian state, which many foreign governments and agencies dismissed as corrupt and/or inefficient. A 2011 study from the U.N. Office of the Special Envoy showed that in 2007, for example, only three percent of bilateral aid, and 13 percent of multilateral aid, was “budget support”, meaning funding for government ministries as well as for local authorities like the community council in Anba Grigri.

U.N. Deputy Special Envoy Dr. Paul Farmer prefaced the report by noting that “creating jobs and supporting the government” is key to ensuring “access to basic services”. He called on donors “to directly invest in the Haitian people and their public and private institutions. The Haitian proverb sak vide pa kanpe – ‘an empty sack cannot stand’ – applies here. To revitalize Haitian institutions, we must channel money through them.”

The World Bank economists agree, noting that CDD projects like PRODEP also work better when they work with local governments. But the PRODEP programme was designed to deliberately channel its funding to non-state service providers almost exclusively: agencies CECI and PADF, and the so-called community based organisations or CBOs rather than bolster Haiti’s local authorities, whose budgets pale in comparison to the PRODEP funding. [See also The Politics of PRODEP]

HGW's extensive fieldwork concentrated on the southeast department, but new reports by economists from the “Poverty and Inequality Team” at World Bank – the very institution that funded PRODEP – support the idea that the findings can be extrapolated.

In their articles and a new book on “induced” versus “organic” participation, researchers Ghazala Mansuri and Vijayendra Rao found that similar projects around the world tend to benefit “wealthier, more educated” participants who are “often more politically connected” and who “tend to make decisions in community meetings".

In their work, the economists raise questions about “community driven development” since, they comment in a June 2012 paper, the World Bank has spent “close to 80 billion (dollars) on participatory development projects over the past decade".

“There is little evidence that induced participation builds long-lasting cohesion, even at the community level. Group formation tends to be both parochial and unequal… (P)eople are induced to participate and build networks. But they do so in order to benefit from the cash and other material payoffs provided by the project,” Mansuri and Rao write.

“Overall, projects tend to have very limited impact in building social cohesion or in rebuilding the state. They tend to exclude the poor and are dominated by elites,” the authors noted. “Induced participation – particularly when it is packaged within a project – is almost set up for failure.”

In 2008, the six PRODEP projects in Anba Grigri received nearly 100,000 dollars altogether, while the community council had an operating budget of only about 6,500 dollars for the entire year.

According to Mansuri and Rao, over the past decade the World Bank has spent some 80 billion dollars on participatory development projects worldwide. At least 61 million dollars was spent in Haiti.

Was the Haiti experience a success?

Yes, according to its stated objectives. World Bank documents posted online note that the projects built or rehabilitated 785 kilometres of road, 444 water distribution points and 448 classrooms, and also contributed to building or stocking other community services like health clinics.

But questions persist, regarding the 20-30 percent of the projects that failed, and the apparent harm done to Haiti’s social fabric and the existing grassroots groups.

In an email to IPS, Diego Arias Carballo, a senior agricultural economist at the World Bank, noted that the Bank’s total portfolio in Haiti is 635.7 million dollars, with many projects that focus on improving the government’s own capacity to implement projects and deliver services.

“It is important to note that the NGOs who support the implementation of the subproject investments also provide technical assistance, training and capacity building to local communities,” Carballo said.

He added that a restructuring plan is being implemented to help problematic subprojects achieve the initial intended objectives before project closing. The World Bank financing is ending in June 2013.

Part two of two. For part one, click here.