This article is the first of a two-part series on the abandonment of the University of the State of Haiti by reconstruction authorities. 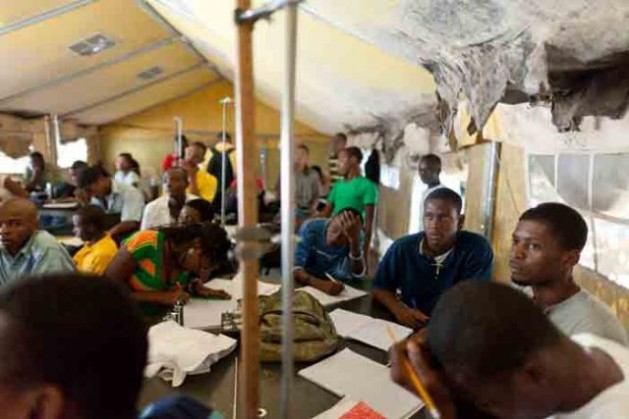 Students in a tent "classroom" at the Faculty of Agronomy and Veterinary Medecine, next to the land the State University hopes to use for a campus. Photo: HGW

PORT-AU-PRINCE, Feb 24 2012 - Two years after the earthquake, and despite the proposals written, the consortiums organised and the foreign delegations entertained, the University of the State of Haiti (Université d’Etat d’Haïti or UEH) still has not seen any “reconstruction”, and the proposal for a university campus that would unite all 11 faculties remains a 25-year-old dream.

Today, the majority of the 13,000 students at the UEH’s faculties in the capital are jammed into sweltering sheds, struggling to hear the professor who is shouting, hoping to drown out the other professors shouting in the surrounding sheds.

The fact that the Haitian government and its “friends” have not financed the reconstruction – on a sufficient operating budget – of the oldest and most important institution of higher learning in the country represents more than a “peril” to Haiti’s future.

These choices – or at least, these omissions – offer perfect examples of the global orientation of the “reconstruction”, which is centred on the needs of the national and international private sector, and which favours “answers” to urgent problems that are often palliative quick fixes.

Finally, these omissions represent contempt for the public interests of the entire nation.

The dream of a campus, the farce of the IHRC

The disaster of Jan. 12, 2010 destroyed nine of the 11 UEH faculties in the capital. Three hundred and eighty students and more than 50 professors and administrative staff of UEH disappeared, according to the university and to a study by the Inter-university Institute for Research and Development (INURED), released in March 2010.

(According to the same study, at least 2,000 students and 130 professors in all of the institutions of higher learning died in the catastrophe.)

Nevertheless, this tragedy offered an opportunity to state university authorities, who are themselves charged with supervising all institutions of higher learning in the country.

The members of the Council of the Rectorate saw their chance to make a dream become reality. Twenty-five years ago, in 1987, delegates at the first conference of the National Federation of Haitian Students (FENEH in French) listed a campus as one of their post-dictatorship goals and demands.

“We always wanted a university campus, we really struggled for that,” recalled Rose Anne Auguste in an interview with Haiti Grassroots Watch (HGW) in July 2011. Once a FENEH leader, today she is a nurse and community activist.

"A Race Between Education and Catastrophe"

A 2000 study funded by the World Bank – Peril and Promise: Higher Education in Developing Countries – sounded the alarm about the lack of investment in public higher education 10 years ago.

It reads: "Since the 1980s, many national governments and international donors have assigned higher education a relatively low priority. Narrow - and, in the view of many, misleading - economic analysis has contributed to the view that public investment in universities and colleges brings meager returns compared to investment in primary and secondary schools.

The study looked at enrollment and investment figures in countries around the world (figures from 1995).

Not surprisingly, in terms of enrollment, Haiti is far behind its neighbours, and in terms of investments, Haiti is at the bottom of the list. Even the Dominican Republic, well-known for its failure to invest in higher education, is ahead of Haiti.

The authors of the study – a committee of academics and former ministers headed by the ex-Dean of Harvard University and the Vice Chancellor of the University of Cape Town – cited a warning from H.G. Wells:

The chance is simply too great to miss. As H.G. Wells said in The Outline of History, "Human history becomes more and more a race between education and catastrophe."

Over one year ago, the Rectorate submitted a proposal to the Interim Haiti Recovery Commission (IHRC), the institution charged with approving and coordinating all reconstruction projects.

“Right in its first extraordinary meeting, on Feb. 5, 2010, the University Council decided to face the reconstruction problem… and we voted a resolution asking the Executive Council to take all measures deemed necessary to assure all the University faculties could be rehoused together,” according to the project, which HGW obtained.

“When considered as part of the challenge of reconstruction and of the re-founding of this nation, this project can be seen as a crucial asset of primary importance which will assure a better tomorrow for our population,” the same document continues.

The Rectorate proposed a provisional student and preliminary budget of 200 million dollars for the construction of the main campus, with classroom buildings, libraries, laboratories, restaurants, and university housing to lodge 15,000 students and 1,000 professors on part of the old Habitation Damien land in Croix-des-Bouquets, north of Port-au-Prince.

Following the submission of the project in February 2011, for months, the IHRC “didn’t respond”, said Vice Rector Fritz Deshommes.

“We gave a copy to each member of the council… the administrative director promised to call us, but that promise was empty. And they never discussed the proposal,” he said.

Auguste was aware of the project.

A founder of the Association for the Promotion of Integral Family Health (APROSIFA in French), Auguste was a member of the IHRC, representing (without the right to vote) the Haitian “NGOs”.

“The project was never discussed at any IHRC assembly, but every member knew about it. I tried to pressure the administrative council to get the project considered and discussed,” she told HGW.

“According to the project director, there were some technical weaknesses,” she added.

But the IHRC had its own weaknesses, according to a study by the U.S.-based Government Accountability Office or GAO published in May 2011.

After a year of existence, many projects had been approved but not financed, two out of five departments had no director, and 22 of 34 key posts remained vacant, the GAO noted.

In short, the IHRC was not “yet fully operational… According to U.S. and NGO officials, staffing shortages affected the project review process – a process to determine whether project proposals should be approved for implementation – and communications with stakeholders, such as the Board of Directors,” according to the GAO.

But the IHRC did acknowledge getting the project.

Contacted via email on Oct. 17, 2011 by HGW, the ICHR director of projects at the time, Aurélie Baoukobza, promised that the campus proposal was under consideration.

“The proposal is currently following the reviewing circuit (sic) and the discussions relative to its approval have not yet been shared,” she wrote.

“Therefore, I cannot discuss this project with the media. The decision of the IHRC and the Government are supposed to be delivered to the submitting parties (the Rectorate) by the end of the week. Only after that official email can I speak about the project,” she promised.

Four days later, on Oct. 21, the mandate of the IHRC expired.

*Students from the Journalism Laboratory at the State University of Haiti collaborated on this series.

Haiti Grassroots Watch is a partnership of AlterPresse, the Society of the Animation of Social Communication (SAKS), the Network of Women Community Radio Broadcasters (REFRAKA) and community radio stations from the Association of Haitian Community Media.