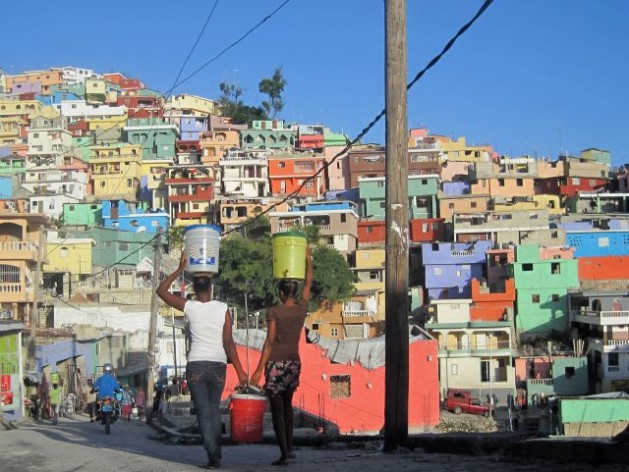 A woman and a girl carry water along a road near a painted portion of the Jalousie neighbourhood in September 2013. Four gallons of water weighs about 11.4 kilogrammes. Credit: HGW/Marc Schindler Saint Val

PORT-AU-PRINCE, Sep 26 2013 - Pink, green, blue, red. From a distance, the thousands of brightly coloured houses look like a painting. The observer can’t see the suffering and dangers threatening the residents of the Jalousie neighbourhood – problems that are being ignored by the government, which is spending six million dollars on a massive make-up job.

“What we need are water and electricity.” -- A Jalousie resident who lives in a small home with 11 others

“Not only does a fault run through Jalousie, but there is also the serious danger of mudslides in the area,” geologist Claude Prépetit, co-author of a new seismological study of the capital, explained at an Aug. 2 press conference.

Many of Jalousie’s small houses are built into the side of Morne L’Hôpital, on steep inclines or in ravines that serve as canals for rainwater. Every time it rains, walls of water rush down the slopes, where officially it is illegal to build, or even to cut down trees. Due to the lack of vegetation to hold it back, the water and mud can carry away people, animals and even entire houses.

A recent Environment Ministry document notes that more than 1,300 homes should be moved because they threaten both their residents and people living in the city below. In 2012, Minister Ronald Toussaint announced plans to move residents in those homes, but when people protested, President Michel Martelly intervened, cancelling the moves and firing the minister.

Jalousie, one of many slums that ring Haiti’s capital, has no water or sanitation system. According to a recent study from the United Nations Educational, Scientific and Cultural Organisation (UNESCO), home sizes range from eight to 30 square metres and population density “may be as high as 1,800 people per hectare”.

Jalousie’s tiny concrete homes overlook the shops, restaurants, hotels and mansions of Pétion-ville, one of the communities where Haiti’s professionals and elite live, work and play. Every day, residents, including children, have to climb narrow stairways to get fresh water – costing up to 35 cents for a five-gallon bucket – which they then carry on their heads. Five gallons of water weights about 48 pounds or 19 kilogrammes.

The Haitian government says it is in the process of spending over six million dollars on the slum, but not to deal with the double-danger or to provide services. 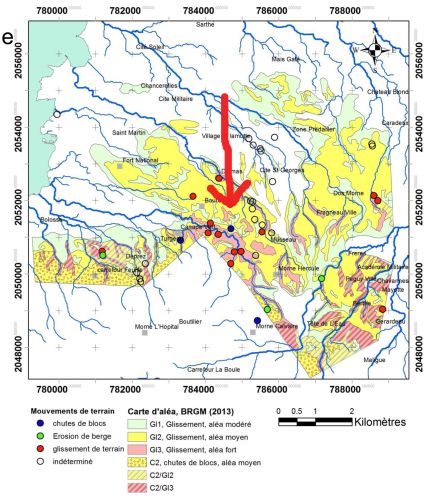 A page from the recent seismologic “microzonage” study showing the areas at risk of mudslides.

Instead, the administration is doing what some have called a “make-up job” – painting the houses in a project called “Jalousie en couleurs” (Jalousie in Colours), as homage to the Haitian painter Préfète Duffaut (1923-2012), who often filled his works with brightly coloured hillside houses.

Phase 1 cost the government 1.2 million dollars. Completed early this year, it coincided with the inauguration of the Hotel Occidental Royal Oasis, a five-star establishment where a simple room costs 175 dollars and a “junior suite” runs more than 350 dollars. Two nights in a suite equal more than most Haitians earn in one year.

The Oasis faces the slum. Phase 1 of the government project assured 1,000 houses were painted, making the view a little more palatable, and allegedly included the “reinforcement” of some homes, although none of the 25 beneficiaries interviewed by Haiti Grassroots Watch (HGW) said their home had gotten more than a paint job.

“Phase 2 will be even bigger,” Prime Minister Laurent Lamothe told a small crowd gathered by a soccer field at the Aug. 16 inauguration. Lamothe said Phase 2 would cost five million dollars.

In his speech, Lamothe said 3,000 more homes would be painted and that the soccer field would get new stands, dressing rooms and synthetic turf. The prime minister also promised a 1.2 kilometre (less than one mile) asphalted street and the improvement of 2.8 kilometres of alleyways.

But as Lamothe sang the praises of the project, two dozen protesters with signs shouted: “We want water! We have no water” and “Schools!” and “We need a clinic!”

Asking for “patience,” the prime minister said: “We’ll deal with all the problems little by little, but you know that you have many problems and we are trying to do a lot with little means.”

A new coat of paint is not the top priority for Jalousie residents, according to HGW’s mini-survey. Asked what was most needed, 24 of 25 said they wanted schools for their children and one-fourth added they wanted better access to water.

At least one resident – who, like most people questioned by HGW, said she would prefer to remain anonymous – is out of patience.

“What we need are water and electricity,” said a woman who lives in a small home with 11 others, including two children who do not attend school.

None of the beneficiaries surveyed reported being consulted even regarding the choice of colours.

Doing laundry by hand on her little porch, one resident said she was not at home when the painting took place, and that she is not satisfied.

“I can paint my own house,” she said. “When I got home, I saw a bunch of splashes of paint on my wall.”

From afar the colours are striking. But for the houses not facing the hotel, the situation is different: grey cement blocks. Even the houses that benefited only got partial paint-jobs – just the outward facing walls get coloured.

One Jalousie resident, Sylvestre Telfort, has the same opinion as many: the project is meant to cover the slum with a kind of make-up or greasepaint because it sits directly in front of the Oasis and another new hotel, the Best Western Premier.

On its Internet site, the Oasis promises its clients a “magnificent views of the city”. Best Western, where rooms run 150 dollars a night, tells its future visitors that the hotel is “located in the beautiful hills of Pétion-Ville, a well-known fashionable suburb of Port-au-Prince”.

“The project to paint Jalousie is nothing more than a social appeasement carried out by the government to satisfy the bourgeoisie who for years has tried to exterminate us, in vain,” Telfort explained. “They can’t drop a bomb to eliminate people. So they have to took another tack and coloured the outsides of our houses.”

The former minister of the environment is worried. “The Morne l’Hôpital situation is chaotic. It’s a matter of public safety… The concrete constructions prevent rainwater from seeping into the soil,” Toussaint told HGW. “Painting is not the answer.”

Claude Prépetit, coordinator of the seismologic study, is also concerned.

Many residents are in danger “because of the risk of mudslides and earth movements [and] the magnification of vibrations during an earthquake,” the geologist said.

Prépetit thinks the government should “interdict all future construction in the region” and “identify the more hazardous areas and move out everyone whose lives are at risk.”

As a last step, after assuring the population has services, “they can paint the facades of the permitted houses, if they want to make them pretty,” he added.

During his visit to the slum, only 14 days after Prépetit and other experts announced the secondary fault, Prime Minister Lamothe made no mention of the seismic risks.

“You are going to see what we can do to improve people’s lives,” Lamothe promised. “You will be proud! You will be happy!”

After his speech, Lamothe and his entourage got into an SUV to drive back down the mountain. Residents went back to their daily journeys, going up and down stairs to find water, trying to survive one more day in the slum called by Best Western “a fashionable suburb”.

The full unabridged series in English and French can be found here.