This article is the second in a two-part series on the development of and controversy over Corail-Cesselesse camp. 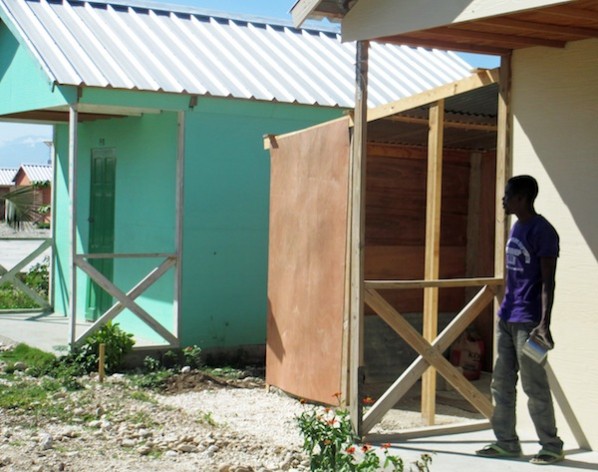 PORT-AU-PRINCE, Jun 19 2013 - Despite the unforgiving sun and its sweltering heat, Joel Monfiston is working, hammering a piece of worn plywood, watering flowers and picking the weeds out from between rocks and pebbles.

Monfiston, a 34-year-old father and husband, is one of about 10,000 people who live in what was publicised as the model settlement for the 1.3 million Haitians displaced by the January 2010 earthquake.

The Corail-Cesselesse camp was set up originally for about 5,000 people being evacuated from a camp, run by Hollywood actor Sean Penn, located on a country club golf course. Many of the refugees lived in tents on dangerously sloped muddy ground. Penn and some other humanitarian actors wanted the evacuees to be the first of thousands more who would be moved out of the city centre.

But on Jul. 29 2010, only three months after the first refugees were installed in tents, the International Organisation for Migration (IOM) issued a report that said the area chosen for the camp was "prone to flood and strong wind" and “should not be used for further relocation and resettlement of" displaced persons.

Apparently undeterred, World Vision and later IOM soon built some 1,500 "transitional shelters" on that very site. Some 10,000 people remain there today and many have invested in their "shelters", making them more permanent.

UN-HABITAT disagreed with the idea of setting up camps on the outskirts of the capital from the outset, according to director Jean-Christophe Adrian, who spoke to HGW in January 2011.

"Corail was created because of pressure from the international community. The government was opposed to it. Préval was opposed," Adrian said. "This kind of spreading out of the city isn't the best thing to do."

"At the time, it was very clear," he noted. "Pressure from the U.S. Army and from our friend Sean Penn, and support from the international community, made this turn into a 'good idea;."

"By declaring the land 'public utility', they opened a Pandora's Box," Adrian added.

World Vision told HGW that it had not seen the IOM report and that it does not consider the area high-risk. World Vision is currently seeking funding to do a three-year project of "livelihoods and youth training and development" work with the camp residents.

"ARC did not have a say in the planning of the Corail Camp (and in fact did not agree with how the things were set up)," Richard Poole told HGW in an email. While he was not opposed to moving people out of the capital per se, he noted, "The location of the camps far from Port-au-Prince with little or no prospect of economic activity was a mistake… Without an economic base, however, the plan was doomed to fail."

Hélène Mauduit, who works for Entrepreneurs du monde in the Corail camp, said, "There is no future for the people of Corail because there is no work, there are not roads and there's no electricity."

"I think someone should make a decision about Corail. They either need to destroy it and put people somewhere else, or they need to say to themselves, 'Ah, these are human beings who life at Corail!' and then need to put into place everything that can guarantee a normal life."

Asked about the Corail camp and surrounding slums for the Raoul Peck film Assistance Mortelle, Priscilla Phelps, former shelter advisor for Haiti's Interim Haiti Recovery Commission Senior, said, "When the story of the Haiti reconstruction is written, the international community's going to be doing a big mea culpa about this site… I hope."

Monfiston lives at the Corail-Cesselesse camp, inaugurated in the spring of 2010 by Hollywood actor Sean Penn, then-Haitian President René Préval and other officials. The settlement is 18 kilometres from the capital in the middle of an almost lunar landscape.

Soon after it opened, tens of thousands of squatters set up tents, huts and houses on over 1,000 hectares of land surrounding the camp, laying the groundwork for what will soon be Haiti’s largest slum. (See “Reconstruction of Haiti Slum to Cost Hundreds of Millions of Dollars”.)

At first, Monfiston and his family lived in a tent. Now they have a 24-square-metre “temporary shelter” built by the humanitarian agency World Vision for 4,500 U.S. dollars and made mostly of plywood and sheet metal. Like most Haitians, he survives with day jobs here and there and with help from friends and family. He also tries his hand at commerce.

“Things are not easy. Imagine: they put you here, but there’s no work,” he said.

Monfiston has dreams. He hopes to set up a shop in the little shed he is building. He would like to grow more in his garden. But those remain dreams. For now, all he has are a few flowers and a few walls for his “store”, which has no shelves, no door, no cooler, no products.

And, like other Corail residents, while he does have access to latrines, some electricity (solar-powered street lamps), playgrounds, a clinic and schools, water is not so easy to find.

In 2011, the United Nations and international humanitarian agency Oxfam promised that a new system of cisterns and kiosks would soon provide residents with water from the state water agency.

Two years later, the faucets remain dry. Residents buy water at five gourdes (about 12 U.S. cents) per bucket from private vendors or from the committees that manage the few still-functioning water “bladders” left from the camp’s early days, when water and food were free and when agencies provided “cash for work” jobs and start-up funds for entrepreneurs.

Today, all of the big agencies are gone. Trumpeting their successes and claiming to have prepared a “transition” to the local authorities, the International Organisation for Migration (IOM), American Refugee Committee (ARC) and World Vision all pulled out (although World Vision still supports the Corail School, which it built).

“Mayor of Croix-des-Bouquets is the New Camp Manager“, a cheery article from the United Nations peacekeeping mission declared in a May 27, 2011 bulletin. But HGW found no evidence of any local authorities or assistance on two separate visits to the camp.

The “City Hall Annex” at the Corail camp was shuttered, and residents told journalists that they could not remember when they last saw anyone from the government.

“Nobody from the mayor’s office has set foot here for many months,” said Racide d’Or, a member of the Corail residents committee.

“They were only around when they knew there was land in the area they could ‘sell’, ” continued the mother of two, who lost her home in earthquake. “There is no ‘government’ or ‘state’ for those of us who live here. We have to figure out everything ourselves.”

The Croix-des-Bouquets City Hall annex in the nearby squatters’ settlement known as “Canaan” is sweltering at midday. The “office” is an empty container and a “conference room” of plywood and a blue plastic tarp roof. Two men there said they worked for City Hall but refused to give their names or allow their voices to be recorded.

“They just dumped us here,” said one, aged about 30. “We don’t have the means to work. Our supervisor never comes to see how we are doing.”

“I’d like to know what they were thinking when they put this office here,” said the other one, older, who was slouched in a plastic chair. “We don’t do anything.”

The absence of humanitarian agencies has one benefit. When agencies were handing out food, jobs and cash, gangs and “mafias” ran various parts of the camps. An Oxfam programme that handed out up to 1,000 dollars to some – but not all – small businesspeople led to disagreements, rumours, protests and eventually arrests.

“The NGOs divided us. People fought with each other,” Auguste Gregory told HGW as he sat with friends next to his telephone-charging business: a table covered with power strips and chargers.

“Some people went to prison. Others went into hiding. We were all there for the same reason, but they divided us,” he remembered.

For much of 2010, a gang calling itself “The Committee of Nine” threatened residents and aid providers alike, so much so that ARC Camp Manager Richard Poole quit his job and left the country.

“My three months at Corail were one of the most difficult periods I have experienced in my 30 years as a humanitarian worker,” Poole later told HGW in an email interview. ARC received about 400,000 U.S. dollars to manage the camp for eight months in 2010.

Still, some humanitarian actors say the Corail settlement was not a complete failure.

“It is important to look at where the families were at the beginning of the earthquake and where they are now,” World Vision told HGW in an email. The agency said it spent about 7 million dollars on 1,200 shelters, a school, playgrounds and various programs.

People “came from areas which were prone to flash flooding, mudslides and disease outbreaks, but now they are in a safer and more secure community”, the agency pointed out. “The families have homes and are protected.”

For Monfiston and his neighbours, however, the “outcome” has not yet produced a way that can pay for food and school for his children.

Alexis Roffy Eddiness Djoly Barns, an artist, is tired of waiting for work, for water and for an “outcome”. He is also nervous about the changing landscape of the region, which is now home to the 10,000 camp residents and perhaps 100,000 squatters.

“They are starting to build a slum right over there,” he said, indicating the expanse of small houses in Jerusalem and Canaan. “Each person is fighting for his little piece of land. The government should do what it’s supposed to do and say – ‘No, this must stop!'”

Read the first article in this two-part series here. Original story at http://www.haitigrassrootswatch.org.