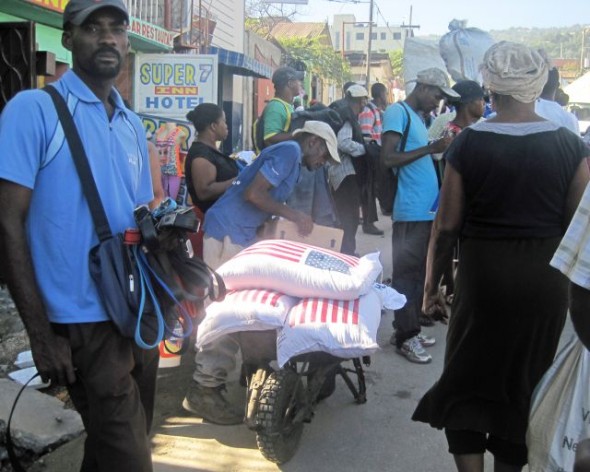 PORT-AU-PRINCE, Oct 10 2013 - Haiti has been receiving food aid for half a century – over 1.5 million tonnes from the U.S. alone during the past two decades.

Recently, however, international aid agencies have raised a cry of alarm. Some two-thirds of all Haitians – almost seven million people – are hungry. About 1.5 million of them – twice as many as last year – face “severe” or “acute food insecurity.” Why?

“They call the programme ‘Down with Hunger,’ but to me, it’s a ‘Long Live Hunger’ programme.” -- Haitian farmer Vériel Auguste

A new five-part investigative series sheds some light on the issue by considering the structural causes, as well as by taking a look at the inefficiencies and what one government official calls “the perverse effects” of food assistance.

Haiti’s agricultural sector has long languished, ignored by its governments and by foreign donors. Agriculture represents about 25 percent of the country’s GDP, and until recently it employed – directly or indirectly – up to two-thirds of the population.

Yet for several decades there has been little investment. The Ministry of Agriculture usually gets less than five percent of the government’s budget, and until recently, foreign funding for food aid far outstripped – and sometimes more than doubled – funding for agriculture.

In 2009, a mission from U.N. High Level Task Force on the Global Food Security Crisis deplored “the abandon of agricultural sector and of national production for the past three decades” and also criticised the government and various foreign government and non-governmental agencies for “multiple strategies and programs, which are sometimes contradictory” and for the “endless conferences that do not deliver any concrete results.”

In the country’s Central Plateau, some say another USAID-funded food programme is causing a population boom.

As part of its multi-year agricultural assistance and food insecurity programme, World Vision hands out U.S.-produced food to pregnant women and new mothers. Sometimes known as “1,000-day programming,” World Vision also ensures the women receive health care, access to education opportunities at “mother’s clubs,” and, in some cases, seeds for a garden.

“That’s why there are more children around,” claimed Carmène Louis, a former beneficiary. “If you want to get in the programme, you can’t unless you are pregnant… You see youngsters [getting pregnant at] 12 or 15 years old! I think it’s a real problem for Savanette.”

Researchers could not confirm the claims due to faulty record keeping, but a 2013 USAID report noted “a rise in pregnancies in one rural area and the possibility of this phenomenon being linked to public perceptions of 1,000 days programming.”

Asked about the possible increased pregnancies, Haiti's secretary of state for vegetable production said that, while he was not familiar with the case, it was not out of the question.

“I have worked in the Central Plateau for 15 years,” Fresner Dorcin exclaimed. “If I talk to you just about the perverse effects of the programmes I myself have seen in front of my eyes… there are so many!”

Other issues – like the land tenure system, deforestation and other environmental degradation, and lack of adequate seeds, fertiliser and roads – all play a part in declining agricultural output.

But the sector has also had to contend with an influx of more-cheaply produced, and sometimes subsidised, foreign food – especially U.S. rice – beginning in 1995 when the Haitian government slashed tariffs under pressure from Washington and the international financial institutions.

Whereas the country imported less than 20 percent of its food in the early 1980s, Haiti now gets over 55 percent from overseas, mostly the U.S. and the Dominican Republic.

Since the 2010 earthquake, the government and foreign donors have launched programmes aimed at redressing these wrongs. Roads are being built and canals dredged, and various projects aim to help farmers up their productivity.

But in Grande Anse, one of the most verdant and productive provinces, agronomists are worried.

“Grande Anse was the breadbasket for the other provinces,” Vériel Auguste said. “But not any more. We are losing that potential.”

As he stood in his demonstration garden, where he grows root crops, grains and trees in an effort to inspire members of his cooperative, Auguste said that nearby, other gardens sit empty.

“People leave their land,” he said, because of the lack of technical support and because their crops cannot compete with cheaper foreign food. “Not far from here are a series of beautiful fields with good land! They are closed. The people have left.”

Earlier this year and for most of 2012, not far from Auguste’s plot, stores advertised a food aid programme that he and many others say has helped drive people from their land and increase the woes of Haiti’s farmers.

Although it only provided food to 18,000 families in this country of 10 million, a Haitian government-approved CARE programme that delivered “disaster relief” food vouchers offers a glimpse of how food aid can be a double-edged sword.

Funded by the U.S. Agency for International Development (USAID), the “Tikè Manje” (“Food Voucher”) programme distributed vouchers redeemable for mostly U.S. products like rice, oil and beans up through August 2013. It was supposedly meant to assist victims of Hurricane Tomas, which hit farmers’ fields in November 2010.

Instead, it did not start up until 11 months later, and only got into full swing in 2012, one year after the storm hit. It was expanded from 12,000 to almost 18,000 beneficiaries after Hurricane Sandy hit the peninsula.

Asked why it was allowed to start one year after Tomas, when U.S. and Haitian agencies deemed that hunger was abating, the director of the government “Aba Grangou” (“Down With Hunger”) programme admitted that the region had “probably already started to recuperate”.

“But since it had already been set up, the U.S. government decided to implement it,” Director Jean Robert Brutus said.

Haiti’s CARE office gave an additional reason. CARE said the programme was a “test” of a new food voucher system, which uses the Jamaica-based Digicel telephone company to transfer credit to beneficiaries. Digicel and the Haitian government both get paid every time a transfer is made.

The programme “is simply a test in certain regions to see if we can implement the programme everywhere in the country,” coordinator Tamara Shukakidze explained in a March 2013 interview, while the Tikè Manje was still running.

At the time, CARE was hoping to be a contractor for a future USAID-funded 20-million-dollar “social security net” project that would include food vouchers, according to CARE spokesman Pierre Seneq.

Farmers and agronomists like Auguste are still livid over the voucher programme because participants were given U.S. rice and vegetable oil rather than locally produced breadfruit and other traditional foods.

“They call the programme ‘Down with Hunger,’ but to me, it’s a ‘Long Live Hunger’ programme,” Auguste said.

Dejoie Dadignac, coordinator of the Network of Dame Marie Agricultural Producers, said her federation of 26 organisations was shocked.

“At every little store we visit, even ones that used to sell cement or tin sheeting, we see a sign: ‘USAID,’” Dadignac said in a September 2012 interview. “In their radio advertising, they say they are giving people plantains and breadfruit, but that’s not what we see. We see rice, spaghetti, oil, while our products are left out.”

Queried on the issue, CARE spokesman Seneq said future programmes would source local foods and thus “contribute to the economy rather than promote foreign food”.

On Sep. 27, USAID announced that CARE was awarded a contract for a new food voucher programme for 250,000 people. When asked where the vouchers would be distributed, and if the new programme would source U.S. or Haitian food, Seneq promised details but then never fulfilled that pledge.

The new programme is funded in part by a USAID food aid budget, Food For Peace, that requires most of the money be used to purchase and ship U.S. grown- and produced-goods. No other food aid programme in the world has those restrictions.

The current administration proposed changes, but because the 2013 Farm Bill – which covers food aid, farm subsidies and food stamps – has not yet been passed, those changes have not been implemented.

Merilus Derius, 71, said he thinks the younger generations are dissuaded from farming because they lack the means to prevent environmental degradation, but also because of cheaper or free foreign food, which are now more desired than products previous generations ate.

“Before, farmers grew sorghum and ground it. They grew Congo peas, planted potatoes, planted manioc. On a morning like this, a farmer would make his coffee and then – using a thing called ‘top-top,’ a little mill – he would crush sugar cane and boil the sugar cane water, and eat cassava bread, and he would have good health!” he said. “When you lived off your garden, you were independent.”

Read the entire Behind Haiti’s Hunger series and watch two videos, shot mostly in Savanette and on Grande Anse, here.