PUNTA DEL ESTE, Uruguay , Oct 29 2012 (IPS) - Uruguay is in the headlines of agricultural development news this week as it hosts the Second Global Conference on Agricultural Research for Development (GCARD 2) from Oct. 29 to Nov. 1 in the resort city of Punta del Este.

Leading agricultural researchers and organisations from around the world are meeting here to develop collaborative actions, increase capacity, and spur innovation in agricultural development. With a focus on partnerships they will be planning joint actions around a forward-looking agenda that looks at predicted trends, future needs, and sustainable solutions to inform current agricultural actions and priorities.

Beyond hosting this key global meeting, Uruguay has another important role to play as an example and source of lessons for developing successful agricultural strategies. The successful evolution of its rice sector is one such example. 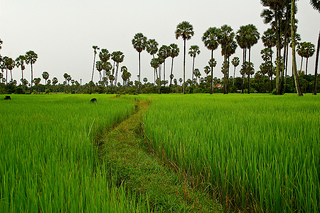 The Uruguayan rice sector is as unique as it is surprising, as it actually has the third highest production rate of rice in the world, averaging eight tons per hectare of dry paddy.

And it is thriving. With no special subsidies or protection from the government, it offers fair prices to farmers and stands up to fierce competition from other major rice producers such as the United States, Argentina, and Thailand. Using agricultural management practices to reduce its carbon and water footprints, it is also environmentally sustainable.

What is the secret to success for Uruguay’s rice-growing system, and what can the world learn from it?

To start, the Uruguayan rice sector targets a high-value export market. Strict production and milling standards are applied to ensure consistent quality. The number of growers is relatively small, under 600, and their plots are large, averaging 300 hectares on irrigated lowland.

And the system is based on a short and highly interactive value chain. Farmers are linked directly with the rice millers, who act as exporters. The two groups also share close connections with Uruguay’s National Agricultural Research Institute (INIA).

Furthermore, the rules regarding quality standards for rice are well-defined. Agronomists associated with the rice millers and representatives from INIA visit farmers’ fields frequently. They share advice and the latest advances, but also take in information from farmers regarding research needs or inputs.

Farmers benefit from other special features of the system, too. Collective insurance is arranged to protect them against hail damage. And the mills lend farmers up to 70 percent of the credit they need to purchase equipment for production. Farmers and millers sign a production contract every year, which includes a private agreement on the price the farmer will receive.

The transparency and integration of the Uruguayan rice sector model promotes stability and reduces uncertainty, boosting the system’s economic sustainability and competitiveness.

Likewise, the crop management and rotation practices of the system favour high yields and environmental sustainability. Here, too, there are important examples for the rest of the world. The substantial progress made in Uruguay’s rice yields is the result of a combination of improvements in sowing, seed, fertiliser use, water management, and weed control. Certified seed is used from improved varieties, and tilling is kept to a minimum to reduce the release of carbon stored in the soil into the atmosphere as a greenhouse gas.

Water availability is the limiting factor for rice production expansion, and farmers have been constructing earth dams to capture rainfall runoff. Currently, more than 50 percent of the rice acreage in Uruguay is irrigated by these dams. The timing of planting is carefully calculated to maximise sun exposure during flowering and minimise cold damage during reproduction.

Can the Uruguayan model be applied elsewhere? Elements of the system’s integration, quality standards, transparency, and crop management could serve as helpful models to be replicated across different production sectors. Specific countries may be good targets for this model, as well. Parts of the Mekong Delta in Vietnam might have good potential as there is government support there for developing a high-quality rice sector for middle-class markets.

The middle-class market in developing countries is set to more than double in size this decade, particularly in Asia. This could augur well for developing high-quality rice sectors in countries where production looms large already.

GCARD2 provides a rich platform to consider the lessons and models of Uruguay’s rice sector and their potential application in other regions.

Along with representatives from Uruguay’s national agricultural sector, the conference has drawn international partners such as the Latin American Fund for Irrigated Rice (FLAR), Global Rice Science Partnership (GRiSP), and International Center for Tropical Agriculture (CIAT), which have collaborated in the development of the improved varieties and management practices that have helped boost Uruguay’s success.

* Gonzalo Zorrilla is an agronomist and executive director of the Latin American Fund for Irrigated Rice.