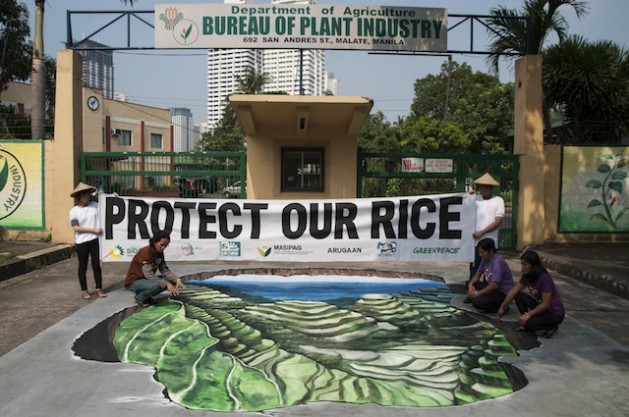 MANILA, Nov 26 2014 (IPS) - Jon Sarmiento, a farmer in the Cavite province in southern Manila, plants a variety of fruits and vegetables, but his main crop, rice, is under threat. He claims that approval by the Philippine government of the genetically modified ‘golden rice’ that is fortified with beta-carotene, which the body converts into vitamin A, could ruin his livelihood.

Sarmiento, who is also the sustainable agriculture programme officer of PAKISAMA, a national movement of farmers’ organisations, told IPS, “Genetically modified rice will not address the lack of vitamin A, as there are already many other sources of this nutrient. It will worsen hunger. It will also kill diversification and contaminate other crops.”

Sarmiento aired his sentiments during a protest activity last week in front of the Bureau of Plant Industry (BPI), an office under the Department of Agriculture, during which farmers unfurled a huge canvas depicting a three-dimensional illustration of the Banaue Rice Terraces in Ifugao province in the northern part of the Philippines.

“We challenge the government to walk the talk and ‘Be RICEponsible’." -- Jon Sarmiento, a farmer in the Cavite province in southern Manila
Considered by Filipinos as the eighth wonder of the world, the 2,000-year-old Ifugao Rice Terraces represent the country’s rich rice heritage, which some say will be at stake once the golden rice is approved.

The protesting farmers also delivered to the BPI, which is responsible for the development of plant industries and crop production and protection, an ‘extraordinary opposition’ petition against any extension, renewal or issuance of a new bio-safety permit for further field testing, feeding trials or commercialisation of golden rice.

“We challenge the government to walk the talk and ‘Be RICEponsible’,” Sarmiento said, echoing the theme of a national advocacy campaign aimed at cultivating rice self-sufficiency in the Philippines.

Currently, this Southeast Asian nation of 100 million people is the eighth largest rice producer in the world, accounting for 2.8 percent of global rice production, according to the Food and Agriculture Organisation of the United Nations (FAO).

But it was also the world’s largest rice importer in 2010, largely because the Philippines’ area of harvested rice is very small compared with other major rice-producing countries in Asia.

In addition to lacking sufficient land resources to produce its total rice requirement, the Philippines is devastated by at least 20 typhoons every year that destroy crops, the FAO said.

However, insufficient output is not the only thing driving research and development on rice.

A far greater concern for scientists and policy-makers is turning the staple food into a greater source of nutrition for the population. The government and independent research institutes are particularly concerned about nutrition deficiencies that cause malnutrition, especially among poorer communities.

According to the Philippines-based International Rice Research Institute (IRRI), “Vitamin A deficiency remains a public health problem in the country, affecting more than 1.7 million children under the age of five and 500,000 pregnant and nursing women.”

The vast majority of those affected live in remote areas, cut off from access to government nutrition programmes. The IRRI estimates that guaranteeing these isolated communities sufficient doses of vitamin A could reduce child mortality here by 23-34 percent.

Such thinking has provided the impetus for continued research and development on genetically modified rice, despite numerous protests including a highly publicised incident in August last year in which hundreds of activists entered a government test field and uprooted saplings of the controversial golden rice crop.

While scientists forge ahead with their tests, protests appear to be heating up, spurred on by a growing global movement against GMOs.

Last week’s public action – which received support from Greenpeace Southeast Asia and included farmers’ groups, organic traders and consumers, mothers and environmentalists – denounced the government’s continuing research on golden rice and field testing, as well as the distribution and cropping of genetically-modified corn and eggplant.

Monica Geaga, another protesting farmer who is from the group SARILAYA, an organisation of female organic farmers from the rice-producing provinces in the main island of Luzon, said women suffer multiple burdens when crops are subjected to genetic modification.

“It is a form of harassment and violence against women who are not just farmers but are also consumers and mothers who manage households and the health and nutrition of their families,” she told IPS.

Geaga said she believes that if plants are altered from their natural state, they release toxins that are harmful to human health.

Protestors urged the government to shield the country’s rice varieties from contamination by genetically modified organisms (GMOs) and instead channel the money for rice research into protecting the country’s biodiversity and rich cultural heritage while ensuring ecological agricultural balance.

Though there is a dearth of hard data on how much the Philippine government has spent on GMO research, the Biotechnology Coalition of the Philippines estimates that the government and its multinational partner companies have spent an estimated 2.6 million dollars developing GM corn alone.

Furthermore, activists and scientists say GMOs violate the National Organic Law that supports the propagation of rice varieties that already possess multi-nutrients such as carbohydrates, minerals, fibre, and potassium, according to the Philippines’ National Nutrition Council (NNC).

The NNC also said other rice varieties traditionally produced in the Philippines such as brown, red, and purple rice contain these nutrients.

Danilo Ocampo, ecological agriculture campaigner for Greenpeace Philippines, said the “flawed regulatory system” in the BPI, the sole government agency in charge of GMO approvals, “has led to approvals of all GMO applications without regard to their long-term impact on the environment and human health.”

“The problem with the current regulatory system is that there is no administrative remedy available to farmers once contamination happens. It is also frustrating that consumers and the larger populace are not given the chance to participate in GM regulation,” said Ocampo.

“It is high time that we exercise our right to participate and be part of a regulatory system that affects our food, our health and our future,” he asserted.

Greenpeace explained in statements released to the media that aside from the lack of scientific consensus on the safety of GMOs on human health and the environment, they also threaten the country’s rich biodiversity.

Greenpeace Philippines said genetically modified crops such as corn or rice contain built-in pesticides that can be toxic, and their ability to cross-breed and cross-pollinate other natural crops can happen in an open environment, which cannot be contained.

Last week saw farmer activists in other cities in the Philippines stage protest actions that called on the government to protect the country’s diverse varieties of rice and crops and stop GMO research and field-testing.