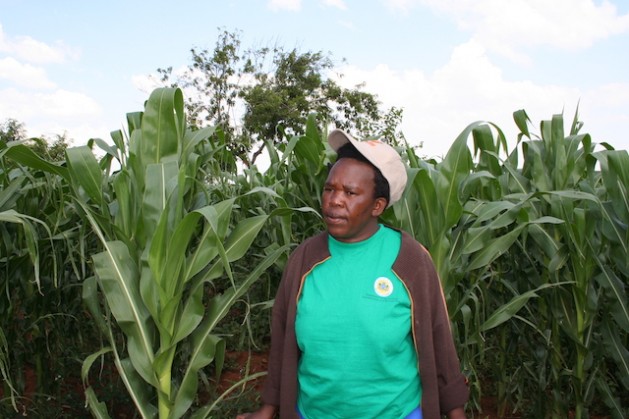 While Sophie Mabhena may be embracing the South African government’s policy to implement biotechnology in farming by growing genetically modified maize, anti-GM experts caution that this does not necessarily lead to food security. Credit: Busani Bafana/IPS

“This is my dream and I know that I am contributing to food security in South Africa,” she told IPS.

Debate is raging here over the government’s policy to promote the cultivation of GM crops.

The new policy promotes multi-sector partnerships and increased public awareness on the benefits of biotechnology – including the use of GM crops.

Mabhena is growing GM maize on part of her family’s 385-hectare Onverwaght Farm because she says the transgenic maize has saved her 218 dollars a season in dealing with pests and weeds.

“Growing stack maize has reduced my costs in terms of pesticides and labour, but the major benefits are the good yields and income from growing this improved variety of maize,” Mabhena said from Onverwaght Farm where, this season, she expects to harvest up to seven tonnes of maize per hectare.

In-built insect resistance (Bt) maize has been grown in South Africa for the last 15 years, but not without opposition from anti-GM activists.

The benefits of GM maize that Mabhena speaks of are not shared by Haidee Swanby, research and outreach officer at the Africa Centre for Biosafety (ACB), which has been on the forefront of spirited campaigns against GM food in South Africa.

Swanby said that GM technology fits into a concentrated farming system, which requires large volumes based on economies of scale, but does not provide livelihoods or healthy, accessible food for ordinary South Africans.

“We need to take a step back and look at our food system in its entirety and decide what system is equitable, environmentally sound and will provide nutritious food for all,” Swanby told IPS.

“The system in which genetically modified organisms [GMOs] fit can’t do that. Apart from the technological failure – for example, the development of resistant and super weeds – adopting this technology leads to the concentration of power, money, land in the hands of the very few and does not necessarily lead to food security.”

Swanby said it was deeply ironic that controversial research on GM maize by Professor Gilles Eric Seralini from France’s University of Caen was ripped apart by regulators, while approvals to allow GMOs in the South African food system have been based on what she calls “un-peer reviewed science that is very scant on detail.”

A 2012 study by Seralini and his research team linked GM maize to cancer. The study has since been dismissed for failing to meet scientific standards by the European Food Safety Authority, a body responsible for reviewing the use and authorisation of GMOs.

“Very rarely do we see information on how many animals were used, for how long, what they were fed and a full analysis of the results. Why has Monsanto’s [an agricultural company and manufacturer of GM maize] research not been submitted to the same kind of scrutiny as Seralini?”

“Today, 24 percent of South Africans go to bed hungry … but the biotech industry has habitually used yield as an indicator of success and this is too narrow and very misleading,” Swanby said.

The ACB argues that the safety of stacking genes is a new area of science whose long-term sustainability remained questionable and states that Bt technology was approved in South Africa before regulatory authorities had the capacity to properly regulate it.

But Dr. Nompumelelo Obokoh, chief executive officer of AfricaBio, a biotechnology association based in Pretoria, told IPS that the GMO Act was passed in 1997 and before then GM crops were regulated under the Agricultural Pests Act.

“Farmers are business people. If it is so difficult or unprofitable to grow Bt maize why is almost 90 percent of our maize based on biotechnology? Surely, if South African farmers found GM maize so difficult to manage why haven’t they rushed back to the old maize varieties of the past?” asked Obokoh.

“Food security is a prime right and biotechnology offers one of the many available solutions,” Obokoh said. “While South Africa is without doubt food secure as a country, we still suffer from food insecurity at household level because of high costs of food and poor incomes. This is where biotechnology is complementing and not competing against conventional farming.”

Anti-GM activist and the executive director of the Institute for Responsible Technology, Jeffrey Smith, told IPS via email that bundling herbicide-tolerant GM crops with herbicide use was in conflict with farming. He cited the diversion of much-needed research dollars into development of expensive GMOs and away from more appropriate technologies

“The GMO advocates have also promoted the myth that crop productivity, by itself, can eradicate hunger,” said Smith, arguing that key international reports over the last 15 years describe how economics and distribution are more fundamental to solving this problem.

However, in November the African Science Academies urged African governments to invest heavily on biotechnology, declaring that biotechnology-enhanced tools and products can help Africa break the cycle of hunger, malnutrition and underdevelopment.