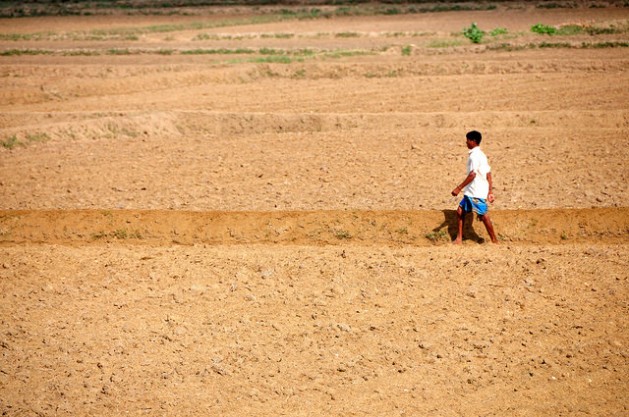 A man walks through agricultural land in the village of Mirusuvil, in Sri Lanka’s northern Jaffna District. Credit: Amantha Perera/IPS

KILINOCHCHI, Sri Lanka, Oct 3 2014 (IPS) - Gazing out over the parched earth of Sri Lanka’s Northern Province, one might think these farmlands have not seen water in years. In fact, this is not too far from the truth.

The World Food Programme (WFP) last month allocated 2.5 million dollars to assist hundreds of thousands of Sri Lankans in the throes of an 11-month drought that has shown no signs of abating. 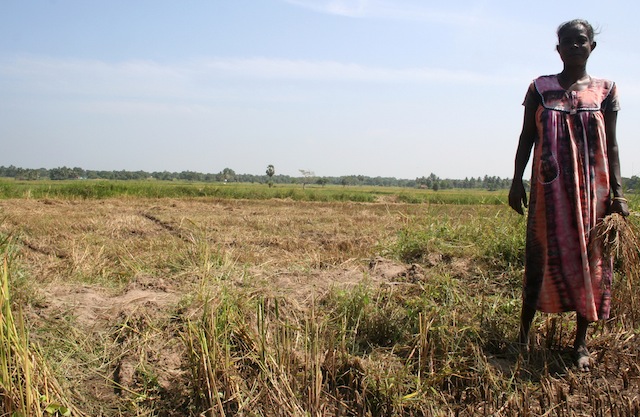 A woman stands in front of her parched paddy land in the eastern Batticaloa District, one of Sri Lanka’s largest paddy-producing regions, that has been hit by the 11-month-long drought. Credit: Amantha Perera/IPS 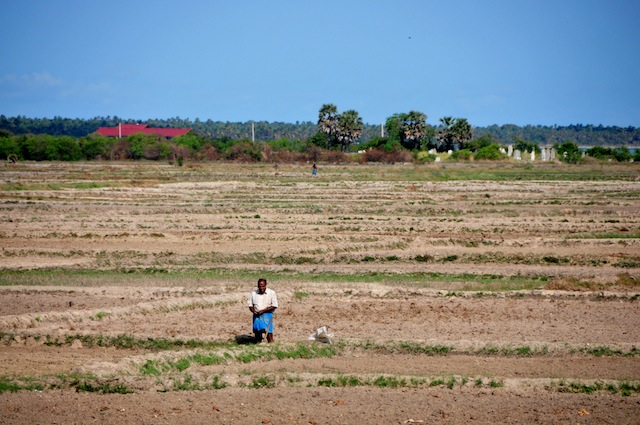 A man stands in the middle of parched paddy land in the northern Kilinochchi District. Sri Lanka’s staple rice harvest is expected to record a loss of 17 percent from around four million metric tonnes in 2013. Credit: Amantha Perera/IPS

The WFP said on Sep. 1 that 2.3 million dollars worth of supplies, including rice rations, would be provided to the drought victims. The assistance scheme will also provide 277,000 dollars in cash grants to needy families. 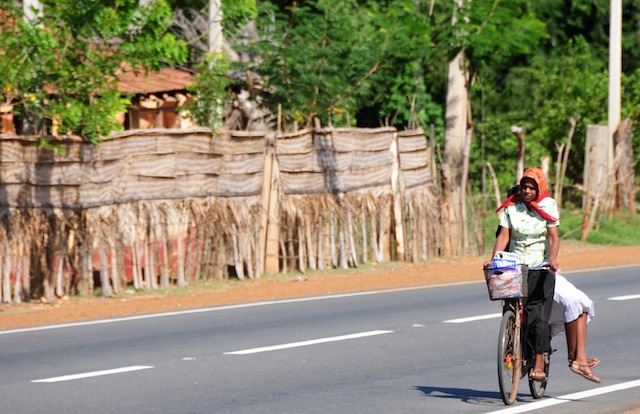 A woman covers her head with a cloth to escape the extreme heat in Sri Lanka’s northern Jaffna District where daytime temperatures can reach 40 degrees Celsius. Credit: Amantha Perera/IPS 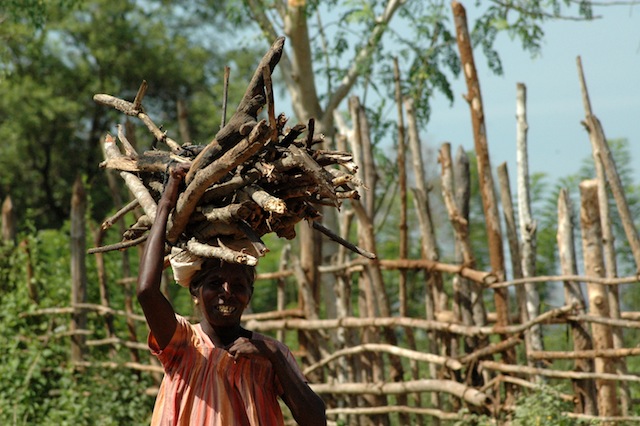 A woman carries firewood in the drought-impacted Pillumalai area of the eastern Batticaloa District. Residents of this region are staring a water crisis in the face, as the main reservoir, the Vakaneri Tank, is almost completely dried up. Credit: Amantha Perera/IPS

The drought has so far impacted over 1.6 million people, of whom at least 190,000 are in need of urgent food assistance, while there are concerns about the food security of an additional 700,000. 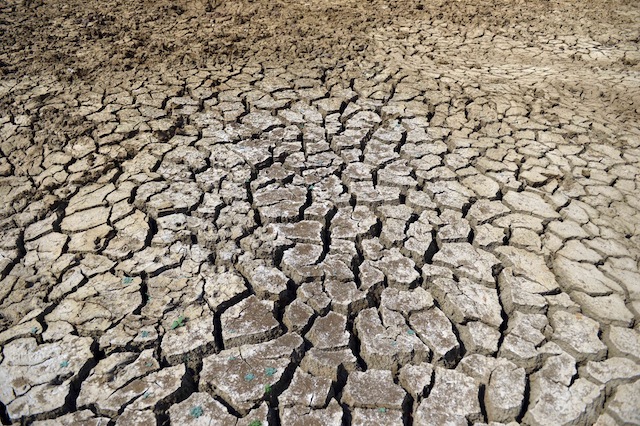 A parched tank bed in the southeastern Moneragala District, where farmers say the absence of rain since late 2013 has completely destroyed their agricultural lands. Credit: Amantha Perera/IPS 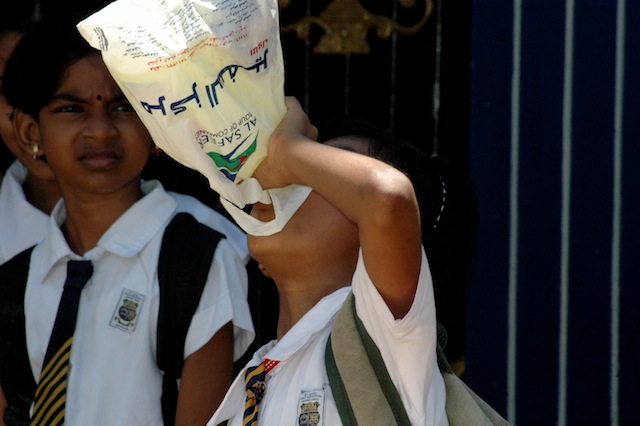 A young girl drinks water out of a bottle in Sri Lanka’s eastern Batticaloa District, where over 220,000 persons have been affected by the drought. Credit: Amantha Perera/IPS

Over half of those impacted by the drought are from the northern and eastern provinces of the country, two of the poorest in the nation. 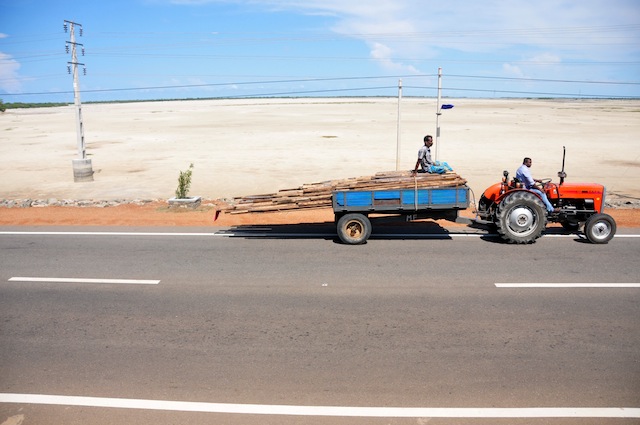 A tractor moves along the side of the dried-out Elephant Pass causeway in the northern Kilinochchi District. Officials told IPS the district was in need of at least nine million rupees (69,000 dollars) per week for drought relief. Credit: Amantha Perera/IPS 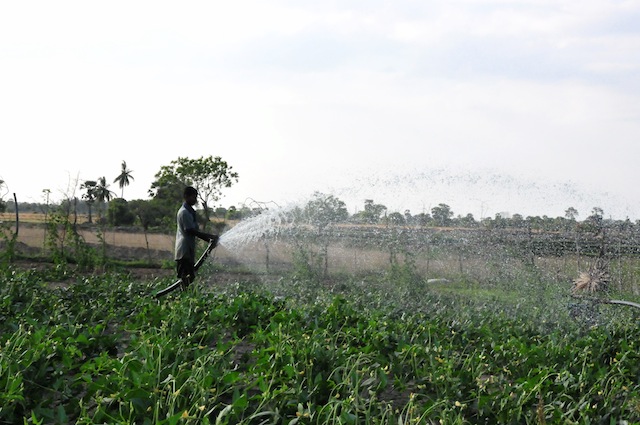 A man uses water from an industrial-grade pump in the Karadiyanaru area of the eastern Batticaloa District. Experts warn that the rampant use of powerful water-pumps in this arid region is putting undue stress on the water table. Credit: Amantha Perera/IPS

While the situation calls for immediate assistance, the WFP also warned that the affected would need long-term help to adapt to the impacts of changing climate patterns. 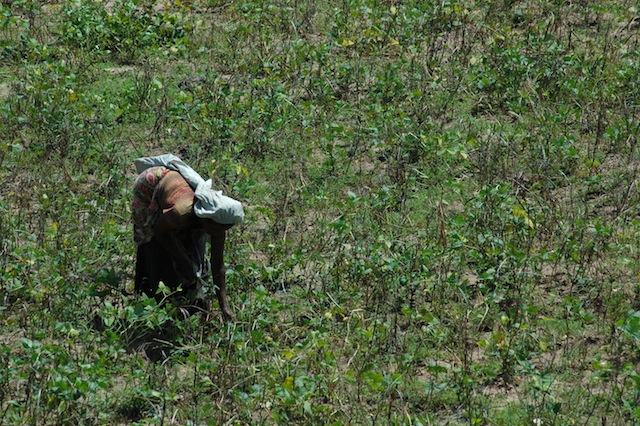 A woman tries to salvage whatever is left of her green gram crop before the lack of water destroys the entire plot in the eastern Pillumalai area of the Batticaloa District. According to government estimates, Sri Lanka’s agricultural output is likely to fall by at least 10 percent this year due to the drought. Credit: Amantha Perera/IPS

The World Bank estimates that the annual risk to Sri Lanka posed by climate-related disasters stands at some 380 million dollars. The worst disaster to date, a severe flood in 2010 and 2011, caused damages to the tune of 50 billion dollars.