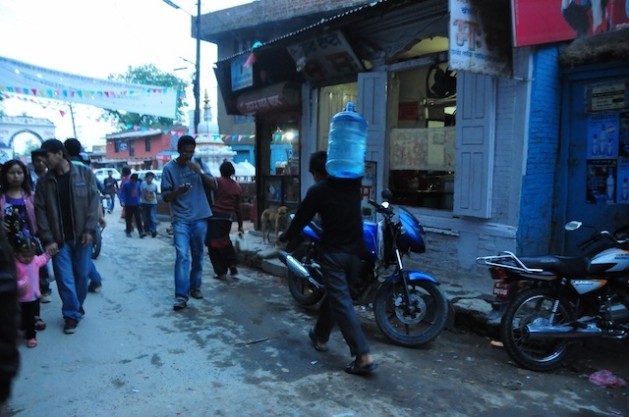 KATHMANDU, May 16 2013 (IPS) - With a combined population of over 1.7 billion, which includes some of the world’s poorest but also a sizeable middle class with a growing spending capacity, South Asia is a policymaker’s nightmare.

The region’s urban population is set to double by 2030, with India alone adding 90 million city dwellers to its metropolises since 2000.

Over 75 percent of South Asia’s residents live in rural areas, with agriculture accounting for 60 percent of the labour force, according to recent statistics released by the World Bank.

Thus the impact of changing weather patterns on this region is staggering.

In Sri Lanka, an island of 20 million, close to two million have been affected by prolonged drought and intermittent yet deadly floods in the last year.

When Cyclone Nilam slammed Southern India last November it left half a million hectares of agricultural land in tatters, over 1,300 small tanks damaged and an estimated 7,000 kilometres of roadways in dire need of repairs – all from just four days of heavy ran.

South Asia has always been a climatic hot spot. According to Pramod Aggarwal, South Asia principal researcher and regional programme leader for agriculture and food security for the Consultative Group on International Agricultural Research (CGIAR), over 70 percent of the region is prone to drought, 12 percent to floods and eight percent to cyclones.

The fourth assessment report of the Intergovernmental Panel on Climate Change (IPCC) warned that possible long-term impacts on the region include melting of glaciers in the Himalayas leading to intense flooding; coastal erosion as a result of sea-level rise; and enourmous stress on limited natural resources to support a growing urban population.

“South Asia is a very complex, complicated, vulnerable region,” Ganesh Shah, Nepal’s former minister of science and technology, told IPS, adding that as the effects of changing climate patterns increase, he and other policymakers will be forced to put political mistrust aside to achieve a common action plan.

Lessons in the agricultural sector

As warmer weather and ever more frequent natural disasters batter this region, populations have been forced to improvise and innovate in order to survive.

Aggarwal cited the example of Indian apple farmers discovering new growing areas on higher grounds in the northern state of Himachal Pradesh, after rising temperatures drove them from their traditional farmlands.

He also pointed out that moderate increases in carbon dioxide concentrations can result in 20 to 30-percent higher yields of plants categorised as “C3” such as wheat, rice, potatoes or yams, all of which make up large portions of the South Asian diet.

Still, these “advantages” will be manifest only in the short term, until around 2030, after which point we can “expect a larger negative impact,” he said.

Meanwhile, rising temperatures could lead to yield losses of between seven and 10 percent for other, less resistant, crop varieties. Bleaker forecasts predict that many South Asian crops will experience 30 percent decreases in yield by the middle of this century.

To avoid this scenario, Aggarwal feels that research generated through such agencies as the New Delhi-based Indian Agricultural Research Institute – with its controlled environment facilities that recreate possible future climate scenarios and assess the real-time impact on crops – needs to be shared.

“We have to understand the opportunities and exploit them,” the scientist said, adding that the impact of changing climate patterns is likely to be more pronounced in tropical countries, which will also experience food shortages.

For years South Asia has been teetering on the brink of a food crisis: according to John Stein, sector director for sustainable development for the South Asia region of the World Bank, the region is already home to half the stunted and wasted children in the world. This will likely increase as a result of climate change.

Thus Aggarwal also stressed that “preventive action” is needed, such as identifying crops that can perform better under warmer temperatures and new locations for growing climate-resistant crops. This information must then be quickly disseminated, he said.

Besides agriculture, another major issue for the region is water management, which will have to be urgently addressed in light of “changing monsoon patterns,” Sumathipala said. Already, 20 percent of the region’s residents do not have access to safe, clean water.

Water management becomes even more complex in the Indian Subcontinent where rivers flow across national boundaries, such as the Ganges, which originates in the Indian Himalayas and flows through Bangladesh before emptying into the Bay of Bengal.

Sumathipala believes better sharing of monsoon-related forecasts, generated mostly in India, could be a first step towards greater climate security in the region. Just last month the Indian Meteorological Department announced that it was enhancing its pre-monsoon forecasting capacities.

South Asia is also under threat from short-lived climate pollutants (SLCPs) such as black carbon, which have a shorter life span than CO2 but are thought to be responsible for about a third of current global warming.

According to the World Bank, black carbon “also influences cloud formation and impacts regional circulation and rainfall patterns such as the monsoon in South Asia,” as well as outdoor air pollution.

South Asia currently accounts for around 10 percent of global emissions, of which India is responsible for between seven and eight percent.

Despite all this evidence on the need for stronger regional cooperation, experts like Shah know how difficult it is to get countries to come together. Platforms have already been put in place, especially through bodies like the South Asian Association for Regional Cooperation (SAARC), but very little has been achieved.

He puts the lack of action down to lack of pressure, stressing, “Climate activists need to be raising this (issue) at each SAARC summit,” the last of which concluded in Addu City, the southernmost atoll of the Maldives, in 2011.