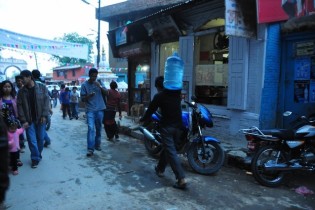 By Patricia Grogg
Cuban diplomacy will be working full blast this year, promoting its own approach to integration in line with the needs and goals of the Community of Latin American and Caribbean States (CELAC), a regional body that excludes the United States, Cuba's leading ideological opponent.

By Marianela Jarroud
Openly conceding the differences in their ideological, economic and geopolitical views, leaders and high-level representatives of the 33 member countries of the Community of Latin American and Caribbean States (CELAC) committed themselves to integration at their first ever summit.

By Fabiana Frayssinet
The European Union's serious economic and financial crisis stands in stark contrast to the relative stability and decade-long growth enjoyed by Latin America and the Caribbean and could put the two blocs on equal footing, giving the Southern region more leverage to further its demands and economic growth.
ADVERTISEMENT ADVERTISEMENT