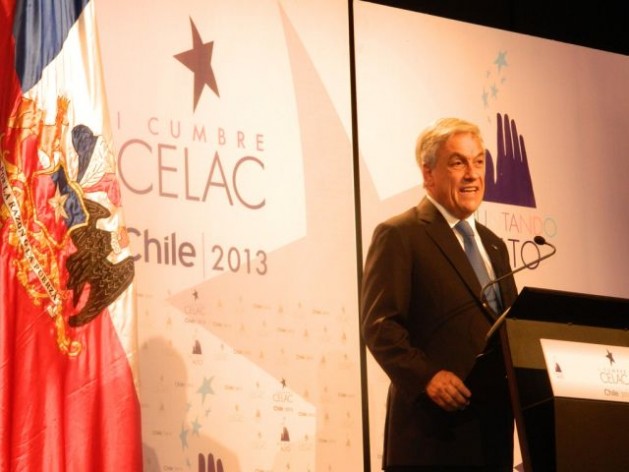 SANTIAGO, Chile, Jan 29 2013 (IPS) - Openly conceding the differences in their ideological, economic and geopolitical views, leaders and high-level representatives of the 33 member countries of the Community of Latin American and Caribbean States (CELAC) committed themselves to integration at their first ever summit.

CELAC “definitely” empowers the region’s voice in the world, said the executive secretary of the Economic Commission for Latin America and the Caribbean (ECLAC), Alicia Bárcena, at the conclusion of the summit in Santiago on Monday.

“I am convinced that this new mechanism is a strong signal, first of all, that Latin America and the Caribbean are no longer what they used to be,” and have experienced “very significant changes”, she said.

Designed in 2010 in Mexico, and created in November 2011 in Caracas, CELAC represents about 600 million people and is the first regional bloc in five decades that leaves out the United States and Canada and includes Cuba.

Rightwing Chilean President Sebastián Piñera said it is “an inclusive (process), because it reaffirms convergence in the same common space, while it has projected itself strongly abroad.”

The host president’s words were along similar lines to those written by Venezuelan President Hugo Chávez, his complete opposite ideologically, in a letter that was read at the summit. Chávez is convalescing in Havana from his fourth cancer operation, which took place on Dec. 11.

The summit was marked by an air of expectancy about the contents of the letter, read out by Venezuelan Vice President Nicolás Maduro. CELAC “is the most important project of political, economic, cultural and social unity in our contemporary history,” Chávez said.

The presence from afar of the Venezuelan leader, one of the promotors of CELAC together with then presidents Felipe Calderón (2006-2012) of Mexico and Luis Inácio Lula da Silva (2003-2011) of Brazil, silently stalked the corridors of the summit and breathed suspense even into the meeting that CELAC leaders held Jan. 25-26 with the European Union.

“We have every right to feel proud: the nation of republics, as Simón Bolívar the Liberator called it, has begun to take shape as a beautiful and happy reality,” he wrote.

Chávez condemned “the shameful imperial blockade of the revolutionary Cuba of Martí (the Cuban independence hero and writer)” and “the continued colonisation and now the progressive militarisation of the Malvinas (Falklands) Islands,” the British overseas territory in the South Atlantic that Argentina claims as its own.

He also called for support for Cuban President Raúl Castro, who took over the temporary presidency of CELAC.

Bárcena said, meanwhile, that countries in Latin America and the Caribbean “are in a better economic situation, are more resilient from the economic point of view, and also from the social point of view, although there are many pending debts.”

She said the region “is well aware of the gaps that need closing internally, and afterwards, if we are more connected, we will be able to relate to foreign countries with greater strength.”

Bárcena said the region has become conscious of the importance of promoting trade between countries.

She added, “If regionalism and integration are dynamised, (production) chains of greater value can be created in the region, and with better articulation, we can (enter into more advantageous) relationships with the Asia-Pacific countries, Europe, or the United States.”

The governments represented at the summit reached convergence on Argentine sovereignty over the Malvinas/Falklands Islands, rejection of the U.S. embargo of Cuba, and the need to reduce the enormous inequalities in the region.

But they expressed divergence when it came to debate on foreign investments in the region and on historic geopolitical demands.

Castro said that “transnational corporations, primarily from North America, will not give up control of energy, water and strategic mineral resources that are becoming scarce,” while he stated that his taking over the CELAC presidency was “a recognition of our people’s selfless struggle for independence.”

For his part, Ecuadorean Foreign Minister Ricardo Patiño called on the Organisation of American States (OAS) to “make reparations to Cuba”, which was suspended from the body in 1962.

When it was the turn of Bolivian President Evo Morales, he insisted on his country’s historic demand for a sovereign outlet to the Pacific Ocean, which it claims from Chile. Piñera replied, and an extended discussion took place between the two in the forum.

Morales also called on the “brothers” of the insurgent Armed Revolutionary Forces of Colombia (FARC) to come to a peace agreement.

They must “understand that in these times, revolutions are not made by bullets but by voices, in democracy, without violence, with awareness and not by vote-buying,” said Morales, in words that earned him the thanks of Colombian President Juan Manuel Santos.

Bárcena said that the countries of the Americas marching towards unity in diversity is part of the new impetus that CELAC brings. The three realities, made up of the Caribbean and Mexico, Central America and South America, “can dialogue in a much broader and I would say much more pragmatic environment, each with its own model,” she said.

In her view, “there is more convergence than before, and I would say that the guiding principle here is the fight against inequality, because all the countries have realised that inequity conspires against technical progress, security, democracy and, above all, against productivity.”

In contrast, international analyst Raúl Söhr held a more cautious and less optimistic view. He said, “integration does not happen because mechanisms are created, but because there is political will, and when it comes to that there is still great divergence” within the region.

“The mechanisms keep proliferating, with the creation of the Pacific Alliance (Chile, Colombia, Mexico and Peru), the Union of South American Nations (UNASUR), CELAC, and the OAS, but at summits like this one, only generic declarations can be made in favour of what is good and against what is bad,” the Chilean expert said.

The second CELAC Summit will be held in 2014 in Havana, at a date yet to be announced.