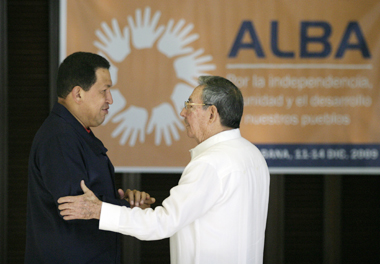 RIO DE JANEIRO, Jan 12 2013 (IPS) - A lot of water has passed under the bridge in Latin America since Hugo Chávez first took office as president of Venezuela in 1999, with left-wing and centre-left governments coming to power and the emergence of paths toward integration that exclude the United States.

The regional identity that Chávez has been instrumental in building is now suffering the vicissitudes of uncertainty arising from the Venezuelan leader’s serious illness. Chávez, re-elected Oct. 7 for the period 2013-2019, is in Cuba convalescing from his fourth surgery for a cancer diagnosed in June 2011.

The folkloric spectrum of the left in all its ideological shades is reflected in the region, from the Cuban model that adapted and survived, and has the support of Chávez, to newer manifestations like “Kirchnerism” in Argentina, “Lulaism” in Brazil, and the movements led by presidents Evo Morales of Bolivia, Rafael Correa of Ecuador, and former guerrillas Daniel Ortega in Nicaragua and José Mujica in Uruguay.

Brazilian peasant leader Joao Pedro Stédile, of the Landless Workers’ Movement (MST) which is allied to Chávez for land reform projects, said that when the Venezuelan president came to power it was “the beginning of the defeat of neoliberalism (free market dogma) in Latin America”.

“After he took office, a wave surged all over the continent. And the people, aware of the evils of neoliberal policies, elected anti-neoliberal candidates in the majority of the countries,” he told IPS.

Chávez laid the first foundations for an alternative for the region, quoting emblematic figures like Simón Bolívar, Ernesto “Che” Guevara and Juan Velasco Alvarado, who inspired his obsession with creating a common front in Latin America outside the U.S.-proposed Free Trade Area of the Americas (FTAA).

The Venezuelan president founded the Bolivarian Alliance for the Peoples of Our America (ALBA), described by Stédile as “an alternative project to capitalist globalisation”, and he worked tirelessly to strengthen other integration instruments like the Union of South American Nations (UNASUR) and the Community of Latin American and Caribbean States (CELAC).

“His leadership role was at a level no Venezuelan and very few Latin American leaders had ever reached before on the regional and international stage. He played a key role in the failure of the FTAA; he questioned the weak institutions of the inter-American system; and he proposed an alternative project to the neoliberal model, taking advantage of the limits of the latter,” he said.

Although “his own project, ALBA, shows more signs of failure than of success, Chávez’s radical criticisms have had the effect of legitimising and opening up spaces for moderate leftwing leaders (like former Brazilian president Luiz Inácio Lula da Silva, 2003-2011) to criticise the neoliberal model and for their voices to be heard,” he said.

Venezuela has also joined the Southern Common Market (Mercosur), originally made up of Argentina, Brazil, Paraguay and Uruguay, seeing it as having potential for the economic integration of all of South America.

“Venezuela was already committed to integration before Chávez came to power, but he was decisive in turning the country’s gaze toward the Southern Cone of South America, instead of only looking toward the Andean countries,” Gabriel Puricelli, head of the Laboratorio de Políticas Públicas (LPP), a progressive think tank in Argentina, said in an interview with IPS.

This commitment was also essential in Venezuela’s help to regional neighbours during economic crises, such as Argentina’s debt bond placements and fuel oil imports.

Chávez’s Venezuela also supplied oil to other friendly countries like Cuba, Uruguay and Nicaragua, a clear demonstration of the traditional concept of “revolutionary solidarity between peoples,” or economic “complementarity” in less politically loaded terms.

“Those funds and projects have been used to maintain a sort of permanent electoral campaign with personal canvassing in different parts of the country,” he said.

The “Bolivarian” model was politically driven, as is reflected in Chávez’s support for peace talks in Colombia, but oil was also an essential factor.

International Chilean analyst Guillermo Holzmann said the model “has a characteristic that is by no means unimportant: it is one of only a few that have the resources to finance a revolution like the one Chávez is building.

“He has been able to forge alliances by virtue of the resources he can offer, in order to maintain a sort of integration based on cooperation, which often favours the poorest countries, but in practice does not lead to a productive integration,” he told IPS.

With stronger economies, like Brazil’s, Venezuela has applied the principle of “you scratch my back, I’ll scratch yours.” Big Brazilian infrastructure companies operate in Venezuela, and energy projects with the Venezuelan state oil company have been announced in Brazil.

Brazil, regarded by the United States as the barometer of the Latin American left, showed its gratitude through foreign policy actions. Not only did it chaperone Venezuela’s entry to Mercosur, but it was also the first country publicly to support the extension of Chávez’s mandate when it became apparent he would not be able to take the oath of office for his new term on the appointed date, Jan 10.

Integration under its own steam

With the prospect of Chávez’s possible absence from the front line, as well as Lula taking a back seat, and the death of former Argentine president Néstor Kirchner (2003-2007), a highly influential trio at the 2005 summit that said “No to FTAA” appear to have left the scene. The big question now is whether integration can make it under its own steam.

In Holzmann’s view, the case of Argentina has shown that “‘Kirchnerism’ can survive without him,” as a force to structure political and economic proposals.

“Lula’s model has also managed to survive and undergo significant development. So much so that when we add in Chavism, we see them together in UNASUR and Mercosur,” he said.

“In spite of the fact that neither Brazil nor Argentina belongs to ALBA, they do have a pragmatic relationship with Caracas on trade matters, and they deal with ideological issues case by case. Clearly, the existence of Venezuela, with Chávez or even without him, is advantageous to Argentina and Brazil according to their own lights,” he said.

Dube concurred, but from a different point of view. “The problems of Latin American integration go further than the roles or the obstacles put in place by each of the political leaders,” he said.

According to Puricelli, the future of regional integration as well as other integration processes depends more on “the devil in the details of regional trade” than on “visible political leadership.”

However, Stédile maintains that Chávez’s leadership has played a vital role. “His personality and determination have set a fast pace without hesitation for necessary changes,” he said.

The peasant leader said he is confident that there will be continuity in Venezuela.

“As we all know, popular leaders have a fundamental role to play in history, but they cannot effect changes on their own. Chávez knows this, which is why throughout his political career he has always promoted and stimulated popular organisations and mass movements as the necessary political forces to build an alternative social project,” he said.

*With additional reporting from Marianela Jarroud in Santiago, Franz Chávez in La Paz and Sebastián Lacunza in Buenos Aires.