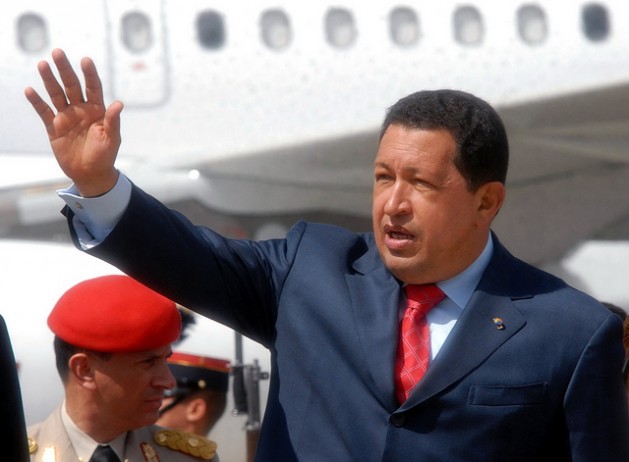 CARACAS, Jan 9 2013 (IPS) - While Hugo Chávez is being treated for serious illness in Havana, the premise of government “continuity” is winning out in his home country, along with plans to postpone his swearing-in ceremony for a new term as president of Venezuela, due to take place on Thursday Jan. 10.

Venezuela has entered a sort of political transition marked by uncertainty over Chávez’s future, with tension, fencing and occasional bluffing between his civilian and military supporters, his opponents and the interests of his international allies.

Appearing jointly before supporters, Vice President Nicolás Maduro and Diosdado Cabello, the president of the single-chamber legislature, maintained that Chávez would continue to serve as president of Venezuela despite the “formality” of the date set for his swearing-in for the 2013-2019 six-year term.

Their insistence that Chávez is “fully exercising” his presidential office can be explained, according to analysts, by their loyalty and also by the need to buy time so that his political heirs can successfully take up the reins of the country.

Chávez, who was diagnosed with cancer of the pelvic region in June 2011 and has been recovering since Dec. 11 from his fourth surgery, has a “lung infection” and “severe respiratory insufficiency,” according to government announcements.

“The plan is to buy time while Maduro is groomed as a second Chávez,” in case new presidential elections are called this year, political commentator Eduardo Semtei told IPS.

Maduro, Cabello and other close collaborators of Chávez met in private in Havana in the closing days of 2012 and the first few days of this year, where they presumably discussed the strategy to be followed while the re-elected president remains on his sick-bed.

The Brazilian presidential adviser on foreign policy, Marco Aurélio Garcia, after meeting Maduro, historic Cuban leader Fidel Castro and Cuban President Raúl Castro on Dec. 31 in Havana, said he had received assurances that, should Chávez remain absent, “there is constitutional provision” and “there will not be political instability in Venezuela”.

Article 231 of the constitution stipulates: “The candidate elected shall take office as President of the Republic on January 10 of the first year of his constitutional term, by taking an oath before the National Assembly (parliament).

“If for any supervening reason, the person elected President of the Republic cannot be sworn in before the National Assembly, he shall take the oath of office before the Supreme Tribunal of Justice (Supreme Court),” the constitution says.

Maduro and Cabello’s proposal is that if Chávez cannot be sworn into office before parliament on Thursday Jan. 10, he can do so later on before the Supreme Court.

In this case “the constitution does not say when or where” he should do this. “This means the re-elected president is in possession of his office; he has express permission from parliament to receive treatment for his health, and when he is able to do so he will take the oath when he is already functioning as president,” Maduro explained.

Cabello, for his part, told a rally of supporters: “Chávez is still the president and he will continue to be beyond Jan. 10. Anyone who opposes this will be met by the people in the streets and they will rue the day they were born, because we will be here knee to the ground, our rifles to our shoulders and bayonets fixed.”

According to the constitution, in the case of “absolute absence” of the president-elect – expert lawyers consider that this includes failure to be sworn in, although others disagree – the president of parliament (Cabello) must take over as head of the executive branch and new elections need to be called within 30 days.

When Chávez left for Cuba on Dec. 8, he said, “As the constitution says, if there is any supervening circumstance that prevents me from carrying on, Nicolás Maduro must not only serve out this period (2007-2013) but when new presidential elections have to be called, my irrevocable opinion is that you should elect Nicolas Maduro as the president.”

In the view of Enrique Sánchez, a professor of constitutional law at the Central University of Venezuela, “swearing-in is an essential requirement for taking possession of the office” of president.

“Chávez will cease to be president at the end of the 2007-2013 period, and he must take office for the following term. It can hardly be said to be a formality, when the constitution dictates the starting date of the term of office,” he said.

“If Vice President Maduro remains in his post after Jan. 10, without an express order from Chávez, we would have a situation of usurpation of presidential functions, that is, a coup d’état,” Sánchez told IPS.

The opposition coalition Mesa de Unidad Democrática (MUD, Coalition for Democratic Unity) said “the premise of continuity violates the constitution.” They said an independent medical panel should review and certify Chávez’s state of health and accused Cabello and Maduro of “trying to cover up his infirmity with the virulence of their discourse.”

MUD coordinator Ramón Guillermo Aveledo wrote to the secretary general of the Organisation of American States, José Miguel Insulza, warning that “continuity” would violate the constitution and the Inter-American Democratic Charter.

Meanwhile, Catholic bishop Diego Padrón, the president of the Venezuelan episcopal conference, said after a meeting of the bishops that the constitution is clear that one presidential term ends and another begins on Jan. 10. “Altering the constitution to achieve a political goal is morally unacceptable,” the bishops said in a statement. “The nation’s political and social stability is at serious risk.”

While opposition groups discuss tactics in the face of the alleged violation of the constitution, the governing United Socialist Party of Venezuela (PSUV) remains unyielding, and its leaders have rejected calls for dialogue to formulate solutions in concert with opposition lawmakers.

If it comes to the crunch, the Supreme Court is expected to rule in favour of Maduro’s administration. A good number of its judges are politically identified with the governing party and will back the executive branch in their decisions.

As for the armed forces, their commanders have reiterated their loyalty to Chávez’s leadership, programme and decisions. Dozens of active and retired members of the military have high office in public administration and 11 were elected governors only three weeks ago as PSUV candidates.

Analysts linked to the opposition maintain that the Maduro-Cabello duo represent the main groups, civil and military respectively, competing for power. They say their show of unity, with the leaders constantly hugging each other in public, is maintained at present only in order to prevent the party ranks from becoming demoralised.

Cabello has called for a mass rally to be held in front of the government palace on Thursday Jan. 10, which will be attended by allies of Chávez in order to lend support to Maduro. Uruguayan President José Mujica will be the first to arrive in Caracas on Wednesday Jan. 9, followed by Bolivian President Evo Morales.