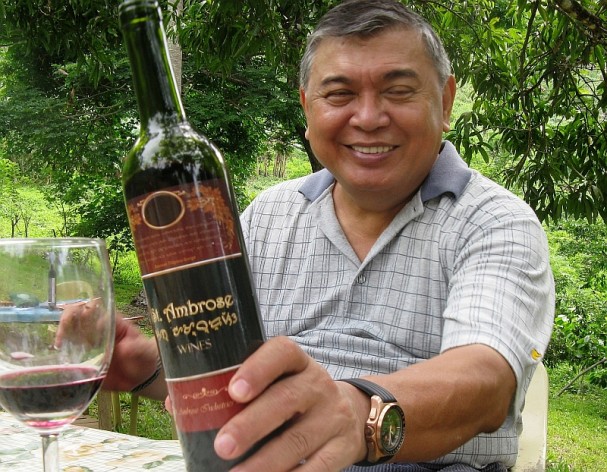 ATISAN, Philippines, Jun 30 2012 (IPS) - The gentle hills on the edge of this remote town are lush with tropical fruit trees that yield fine wines  for the Broadchem Corporation and also give the agro company a green label.

It was not always like this. Until the Manila-based Broadchem stepped into this 17-hectare range it was the haunt of timber merchants who ruthlessly stripped the  hills bare and left them vulnerable to soil erosion.

This corporate nod towards biodiversity has resulted in a sprawling orchard of tropical fruits including banana and soursop (locally called guyabano) that is used to make juices, smoothies, or ice cream.

The orchards also support a range of wild berry trees that produce a range of fruit wines including ‘bignay’ made from the deep pink berries of that name.

Last year, Manila’s wine stores saw the entry on their racks of St. Ambrose Bignay that is becoming increasingly popular, according to Jose Reano, president of Broadchem.

With drinking habits in the Philippines expanding from local beers and spirits to wine, producers of ‘bignay’ are assured a growing market share.

“Bignay wine is sought after not only for its unique flavour and appetizing red colour, but also for its high antioxidant activity that has health benefits,” says Erlinda Dizon, director of the institute of food science and technology at the University of the Philippines’ Los Banos campus.

Jams and juices have also been flowing from this venture by Broadchem, that has stakes in animal care and veterinary products.

“This is how we view corporate social responsibility,” Reano said. “Local communities are involved in our conservation programmes. We have convinced them about the advantages of growing fruit trees.”

A growing number of companies across this Southeast Asian archipelagic country have adopted similar business models that see  conservation not as charity but as an opportunity to make profits (such as by selling wine) through long-term green investments.

“This business model for denuded areas has been utilised to grow various crops such as mango, citrus, coffee and cacao,” says Lory Tan, chief executive officer of the World Wildlife Fund’s Philippines office.

“These are early days,” Tan adds cautiously. “We cannot yet assume that this is a growing trend. I think it is a good idea, within limits.”

Tan believes that for denuded areas, agro-forestry is a good model. “Aside from environmental benefits, such as slope stabilisation, water recharge and flood management, it can provide recurring income for local communities – unlike timber trees that are grown to be cut.”

“Previously, companies would indulge in one-shot projects like medical missions or look out for a dole for their activities,” says Mars Mendoza, deputy executive director of Fair Trade Alliance, a Philippines non-governmental organisation (NGO).

“Today there are community-based farmers’ cooperatives that enter  joint undertakings to plant, for example, tropical vegetables that are used as raw materials for making food supplements,” she tells IPS. “It is giving new depth to companies’ social responsibilities.”

The green approach grew out of a need to help marginalised communities revive denuded terrains following the devastating typhoons and floods that swept through this country three years ago, affecting thousands of lives and damaging large swathes of land.

Even the country’s investment arm has acquired a green shade. The department of trade and industries now expects investors to have  environmental compliance certificates covering commitments to donate seedlings or help tree-planting programmes.

Last year, the Philippines division of CEMEX, the Mexican cement giant, began converting part of its property in Cebu into a forest community with the involvement of the local government.

CEMEX also has a programme to conserve white sharks in Philippine  waters with support from international environmental groups that won recognition in 2010-2011 from the ASEAN Centre for Biodiversity (ACB).

“Considering the limited resources of developing countries in the region amidst numerous socio-economic challenges they face, the participation of business in biodiversity protection and preservation is truly the way forward,” Lourdes Orijola, assistant secretary to the Philippines department of science and technology, remarks in an ACB publication.

The success of bignay wine makes women like Maria Victoria Katigbak, a community leader in Atisan, feel there is a future for its 1,200 poverty-stricken households in environment-friendly productivity.

“We have stopped cutting down trees for charcoal production and switched to growing fruit trees to make the wines and juices,” she said. “It is bringing in money we didn’t have before.”