KAMPALA, Nov 20 2011 (IPS) - Life in Bwaise – a slum on the outskirts of the capital of Uganda – has never been easy. But increasingly erratic rains over the last three years have brought constant floods to the former swampland. Residents who can afford to are moving out, leaving the poorest – often single mothers and grandmothers – behind. 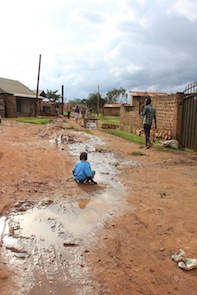 Water stands in the roads of Bwaise after a light morning rainfall. The urban slum’s drainage system is unable to handle even slight rains. Credit: Andrew Green/IPS

The gardens around Regina Bayiyana’s home in Bwaise keep washing away. Her husband and all five of her children died after long illnesses, leaving her to raise 15 grandchildren on her own in her one- bedroom house. The crops she grew in the gardens – bananas, sweet potatoes and yams – were her main source of both food and income.

Now she and her family have cut back to one meal a day and there is no longer money for school fees.

“Ten years back this used to be a good place,” Bayiyana said. “Now we can’t plant… The water is entering our homes whenever it rains. All my property was washed away by the rains.”

In hilly Kampala, Bwaise is a low-lying area that was settled in the early 1980s, according to Florence Masuliya, a programme officer at Tusitukirewamu Group – a women’s empowerment organisation based in the slum. Many of the people who moved there were refugees from violence-ridden areas around the country.

Though it was never a desirable community, people were able to set up shops and cultivate enough food to get by, Masuliya said. At least, until rain patterns in the capital city began to change.

“It used to be that November and December was the rainy season,” she said. “But right now, since January, we’ve been experiencing rain, rain, rain. I think it came due to climate change.”

A 2008 Oxfam International report, written with assistance from district officials in Uganda, said many of the changes to the country’s climate – including “heavy and violent” rains – were consistent with global warming effects.

Though weather patterns in Uganda have always been unpredictable, the authors said the recently inconsistent rainfall combined with the country’s continuing deforestation could increase risk of floods, as the soil is unable to absorb as much water. And the report predicted that the entire region could expect to become even wetter in the future.

The water running down from the surrounding developed communities into Bwaise emphasises the report’s finding. Because there was little official planning that went into the development of the community, the drainage systems that are in place are too few and too rudimentary to handle the amount of water being dumped on the neighbourhood. Instead, it just runs through the houses and shops.

Many buildings are beginning to rot or crumble. The rains at night are especially treacherous, with floods catching families unaware and sometimes drowning small children. And the water that remains, standing stagnant on roads and in gardens, has been a breeding ground for diseases like cholera and typhoid.

Though she was not ready for the floods when they first started coming, Bayiyana has now learned to prepare for the rain. When she hears it coming at night, she piles the family’s three mattresses on top of each other and instructs her grandchildren to clamber on top to avoid the water and the snakes that sometime wash into their home.

But they have not managed to completely avoid the contaminated water. Several of Bayiyana’s grandchildren recently broke out in skin rashes and she had to take them to a nearby hospital for treatment.

She would like to move away, but “no one would buy this land. If I sold it, I would get very little money.”

Though the rains are indiscriminate, the group they have ended up hitting hardest are Bwaise’s mothers and grandmothers, said Florence Kasule, the programme manager for Africa Women’s Economic Policy Network. Her organisation has been working to raise awareness of the problems in the community.

She said that since the rains came, men have been moving from the community to look for steadier income, because the flooding had made work unreliable. Most left their wives and children behind.

“Women cannot easily shift because of their children,” Kasule said. “Nobody can accommodate three or four children.” In the absence of their husbands, most women are left to look for whatever work they can find, sometimes selling food outside bars at night or hocking dried fish on the roadside.

Susan Nakayiza’s husband left her to raise their 12 children alone. She said her family was not prepared for the rains. There had been no official warning and she had no way to know that the previously normal rains would turn to floods, so when they started in 2008, they destroyed nearly everything she owns.

To make ends meet, she is now running a clothes-washing business out of her house, which is cramped with piles of her neighbours’ dirty laundry.

Her children help out with the business, taking orders and washing clothes in their cramped yard. But she still had to pull the younger children out of school because money was too tight. And business is getting worse as more and more people move away.

Like Bayiyana, Nakayiza dreams of leaving, “but I don’t have the money to rent somewhere,” she said.

Masuliya’s organisation is looking for funding to support the local women who are left behind. They recently facilitated a grant from the United States Embassy through the President’s Emergency Plan for AIDS Relief that provides money for women to grow mushrooms, which they can eat or sell.

Bayiyana is one of the participants. Because her gardens are flooded, Masuliya is letting the grandmother cultivate land behind the Tusitukirewamu Group’s headquarters.

Masuliya has also been working closely with local officials to encourage them to develop a better drainage system in Bwaise to draw water away from residents’ homes. She has been promised that the next year will bring a new system, funded by the World Bank.

And local officials have also gotten involved. The Kampala Capital City Authority (KCCA) has held workshops in the district to encourage people to properly dispose of their garbage, so it doesn’t get caught in the floods, according to Janet Massazi, a KCCA community development officer.

They have also been holding official disaster preparedness workshops in Bwaise and the surrounding communities over the last three years. It’s not a new drainage system, but it is an effort to raise awareness and prepare people for the floods.

Bayiyana said she is grateful for the efforts others have made to help the people left in Bwaise, but she does not expect things to really change in her lifetime.

“My message to the government is: Support these people,” she said. “I myself am a widow. I can’t do anything. I need to get support from somewhere.”