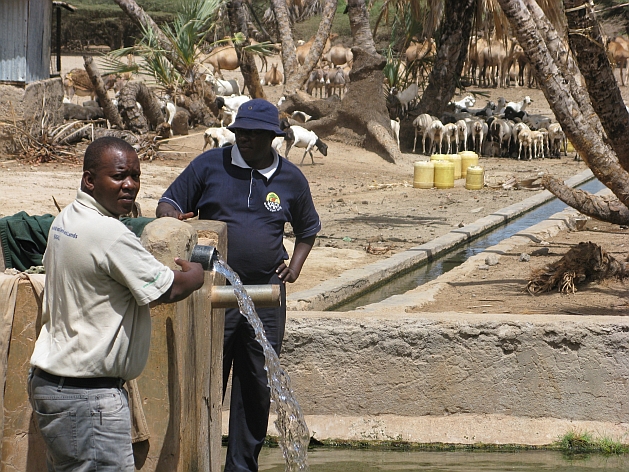 Residents of Kalacha proposed that water from a rare fresh-water desert spring be used to irrigate indigenous grass, which could be used as fodder. Credit: Isaiah Esipisu/IPS

NAIROBI , Nov 17 2011 (IPS) - When donor-funded horticultural projects failed in Kalacha village at the edge of the Chalbi Desert in North Eastern Province, Kenya, the local pastoralist community proposed their own idea, which turned out to be the solution to their problems.

“When horticulture was introduced by a host of non-governmental organisations five years ago, we really got excited because it was going to be an alternative to our pastoralist lifestyle that is already threatened by the changing climatic conditions.

“But before long, we discovered that all was useless because monkeys and other animals fed on the crops,” said Abdi Tuya, a resident of Kalacha.

However, after consultation with community members, the Kenya Arid and Semi Arid Lands Research Programme (KASAL), which is being implemented by the Kenya Agricultural Research Institute (KARI), discovered that the community already had a viable idea for a project.

“They insisted that they wanted to use the water and the land to grow grass to fatten (their) malnourished goats and camels, especially during the drought,” Dr. David Miano, the head of KASAL told IPS.

The North Eastern Province is generally an arid region, which has always been dry. But in the wake of the changing climate, the situation has worsened with erratic and unpredictable rainfall.

The government estimates that over 50 million domestic animals in the region are at risk of dying, while more than 1.4 million people are in dire need of relief food due to the worsening drought.

But residents of Kalacha proposed that water from a rare fresh-water desert spring be used to irrigate indigenous grass, which could be used as fodder. “This forced our scientists to start a new research (project) to identify the different types of indigenous grasses that are drought tolerant, and which have sufficient nutritional values for animal fattening purposes,” said Miano.

And now two years on, farmers can point to thousands of animals that would have succumbed in the recent drought in the region, had they not had the means to feed them.

“Grass farming is the best thing that happened to me. All the malnourished animals are brought back home from the pastoralists’ grazing grounds for fattening. In the past year, I have been able to save up to 80 goats that were succumbing to the drought,” said Tuya, who owns 450 goats and 15 camels.

Earlier the only solution would have been to slaughter the animals.

Home grown successes, like this one in Kalacha, has climatologists and African think tanks saying that an African solution is the only way that Africa can adapt to changing climatic conditions. The call comes ahead of the 17th Conference of the Parties to the United Nations Framework Convention on Climate Change to be held in Durban, South Africa from Nov. 28 to Dec. 9.

“We have come to terms with the reality that however successful a project can be in one area, it does not mean that it will succeed in a different area, even if the climatic and geographical features are the same,” said Rajendra Kumar Pachauri, chairman of the Intergovernmental Panel on Climate Change (IPCC).

“Projects with a huge impact in Mongolia, for example, may not succeed in Africa,” Pachauri told IPS.

Experts say that African research institutions and centres of excellence must scale up Africa-focused climate research to improve the science base and reduce prediction uncertainties in user-relevant climate variables.

“In this regard, research should be relevant to local needs, (it should be) more practical and policy driven,” said Pachauri.

This comes after several climate change adaptation projects in Africa have proved irrelevant to local needs.

Examples include the introduction of Prosopis juliflora, a shrub or small tree native to Mexico, South America and the Caribbean, which was supposed to provide forest cover in dry-land areas, but turned out to be a menace.

In Ethiopia, studies indicate that the shrub has had a negative impact on people’s food security and livelihoods, especially in the Afar region in northern Ethiopia, where it has colonised arable lands.

“Though we have different uses of the tree, which include fuel, fencing, construction, and charcoal making, we would be happy if someone taught us how to eradicate Woyane hara (the local name for prosopis),” Ato Kebele, a resident from Afar who works in the country’s capital Addis Ababa, told IPS.

“We would prefer to grow indigenous trees instead of this ‘enemy’ (shrub),” said Kebele.

In Kenya, residents of Baringo County in the Rift Valley region took the Food and Agriculture Organization of the United Nations (FAO) to court in 2007. They claimed that after the organisation introduced prosopis, also known as Mathenge, to the area it colonised their farms, and affected the teeth of goats that fed on the pods. They produced a toothless goat as evidence.

Following the case, the court declared the tree poisonous and ordered the government to destroy it and set up a commission to recommend the level of damages payable as compensation to the community. However, Alexander Alusa, the climate change policy advisor in the Kenyan prime minister’s office, warns that even after African solutions are adapted to African climate change problems, policies need to be cohesive in order for them to work effectively.