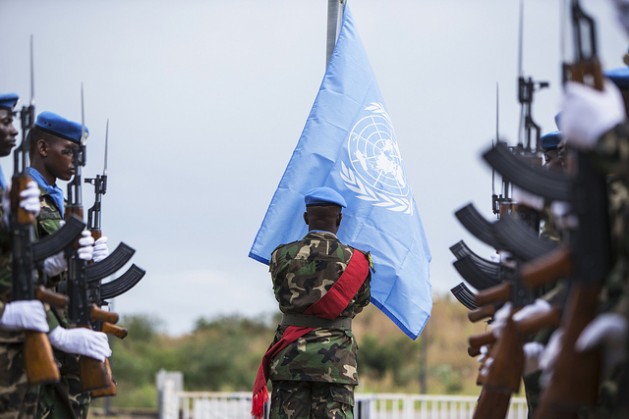 UNITED NATIONS, Feb 1 2014 (IPS) - As South Sudan’s fragile ceasefire threatens to unravel, human rights groups are calling on the U.N.’s mission there to make public its human rights reporting, a step they say will help lay the groundwork for reconciliation that never took place following independence in 2011.

Though the mission, UNMISS, reports to the Security Council every four months and periodically publishes press releases, it is not mandated to make public the information its human rights division collects.

"In UNMISS a lot of the leadership believed they were there to capacity-build the government. That mindset has to change now – with this conflict it’s very clear that this government is party to a conflict.” -- Jehanne Henry

While missions often elect to put out human rights reports regardless of their mandate, as UNMISS has done twice since its creation in 2011, observers and U.N. officials tell IPS many reports are filtered through back channels to U.N. headquarters or via longstanding private connections to human rights organisations.

With no transparency mechanism, they say, oversight is difficult and self-reflection rare. Complicating matters are Security Council members that rely on their own sources in the country and within the mission.

“We’ve been concerned by the lack of public reporting coming out of the mission, especially when you compare it to the output of other missions such as the one in the Democratic Republic of Congo or Ivory Coast,” said Philippe Bolopion, U.N. director at Human Rights Watch.

“In a country where you have entrenched impunity, including for crimes committed by security forces, it’s all the more important that the U.N. reach out and report on abuses, whoever committed them, and the U.N. Mission has not always done that,” Bolopion told IPS.

In a statement, the mission told IPS that it “does not keep information from the public but we don’t go into specifics, especially not while in the process of collecting evidence – which again will only be possible when we have regained full access throughout the country or at least all areas affected by violence.”

“UNMISS will continue to publish reports and will continue to remain impartial in documenting, collecting and interviewing eyewitnesses from all sides and in all areas of the conflict,” said a spokesperson.

The mission did not respond to questions concerning the private dissemination of human rights reporting.

Observers agree that due to concerns over security and accuracy, releasing reports now is difficult. But complaints well preceded the current violence, says Michelle Kisenkoetter, representative to the U.N. at the International Federation for Human Rights (FIDH).

Three Quarters of a Million Displaced

The International Crisis Group estimates nearly 10,000 have died and the U.N. reports over 750,000 people have been displaced since fighting began on Dec. 15.

On Dec. 24, the Security Council voted to approve an additional 5,000 peacekeepers, but reinforcements have been slow to arrive. As they do, most are being assigned the unprecedented task of protecting over 80,000 people who have sought shelter at UNMISS bases after the mission opened shortly after fighting broke out.

Though the protection of civilians is written into UNMISS’ Chapter 7 Mandate, the safety of such a number of civilians was anything but assured.

“FIDH has been calling for a long time for public human rights reports coming out of U.N. peacekeeping missions and the situation in South Sudan is a perfect example of where that is extremely important,” she said.

“[It’s] an area where the U.N. is the only one with access to the community in many parts of the country. They have a mandate to be observing and monitoring the human rights situation and it’s imperative that those reports go public so we can shed some light on what’s happening.

The last human rights report from UNMISS was released in April 2013, several months before communal violence in Jonglei state that would presage the current conflict.

One observer at a large international think tank told IPS the public reporting “ has been very limited and systematically downplaying the extent of the abuses, including on the violence in Jonglei, where I believe the ethnic dimension and the government’s (or government officials’) lack of appropriate reaction if not direct responsibility should have been publicly and clearly invoked.”

Long-simmering mistrust within the ruling SPLM party erupted on Dec. 15 when rival factions clashed in Juba. President Salva Kiir, a Dinka, accused former vice-president Riek Machar, whom he had sacked in July, of plotting a coup. Machar, a Nuer, denied those charges but fled and took command of rebels and SPLA deserters. Soon after, fighting devolved into vicious ethnic clashes.

On Dec. 24, U.N. High Commissioner for Human Rights Navi Pillay said teams had encountered mass graves in both Juba and Bentiu and reported extensive “extrajudicial killings” and “the targeting of individuals on the basis of their ethnicity.”

The U.N. has indicated it will offer information – privately – to assist a recently announced African Union commission of inquiry, the details of which have yet to be fully established.

On Jan. 23, with rebels losing ground to government and Ugandan forces and running out of food and ammunition, negotiators in Addis Ababa agreed to a temporary cessation of hostilities. Both sides have since accused one another of breaking its terms.

Though overseen by U.N. headquarters, each mission’s special representative is given broad latitude to dictate internal policies and maintain lines of communication with sources that may also be the target of investigations. Hilde Johnson, appointed to lead UNMISS in 2011 with backing from then U.S. Ambassador Susan Rice, has maintained a relatively low profile and according to observers, a cautious, in-house management style.

A large NGO presence and heavy Western funding have fostered allegations the intervention relied too heavily on development to head off lasting grievances, seeing the potential for a north-south conflict but not an internal civil war.

Relations between the U.N. and the southern government soured in May 2011 when Sudanese forces seized the contested border region of Abyei. At the time, U.N. officials said southern incursions had provoked violence.

In November 2012, Kiir expelled a top UNMISS human rights official for “unethical” reporting. Shortly before the January ceasefire, he accused UNMISS of sheltering rebels and “running a parallel government.”

“There’s a constant tension between the importance of having access on the ground and the requirement of fulfilling the mandate as laid out by the Security Council,” said one U.N. official, who spoke to IPS on the condition of anonymity.

“Human rights reporting is always controversial in missions – the category of U.N. staff that gets thrown out of the country by the host governments are inevitably human rights officers. Nevertheless, their work is critical to the U.N.’s credibility.”

But other observers tell IPS the mission played only a small role in peace negotiations and have become preoccupied with maintaining their position in South Sudan.

“The effectiveness of a peacekeeping mission is always complicated by the relationship with the government and understandings of mandates,” said Jehanne Henry, senior Africa researcher at Human Rights Watch who has been compiling reports in South Sudan since the outbreak of violence.

“Their human rights reporting should have been more regular and public,” said Henry. “You can make the argument very clearly [that] the atrocities that were committed in Jonglei wouldn’t have been committed as they were if the government felt it was really being watched and called out.”

Kisenkoetter says the tenuous state of emergency surrounding the ceasefire furthers the sense that accountability will be pushed down the road. Public reporting and establishing a precedent for transparency is vital in a country where a 2005 peace agreement with the north included no justice mechanism for south-on-south violence, she says.

“This is precisely why the U.N. and international community needs to take seriously its role of ensuring justice and ensuring political reconciliation – if we leave it the military victor to rule, that’s the greatest mistake we can make.”