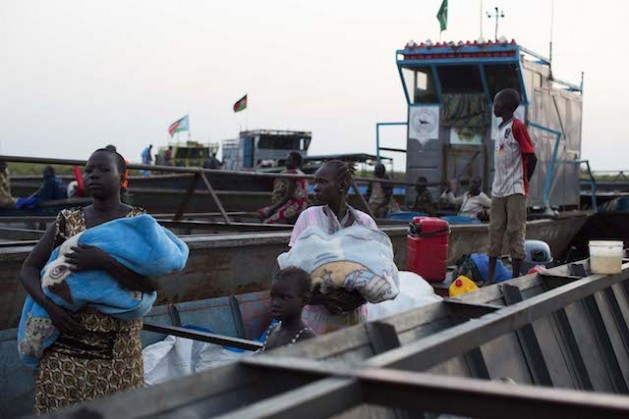 Two mothers and their children look to shore after arriving by boat to Mingkaman, Awerial County, Lakes State, South Sudan. In less than a month close to 84,000 fleeing the fighting in Bor have crossed the river Nile. Credit: Mackenzie Knowles-Coursin/IPS

ADDIS ABABA, Jan 26 2014 (IPS) - When representatives of the warring factions of South Sudan signed an agreement to end hostilities at a luxury hotel in Addis Ababa, Ethiopia on Thursday, Jan, 23, fervent applause and some high-pitched ululations erupted from the audience.

The cessation of hostilities called for both sides to lay down arms within 24 hours. But on Friday evening, at around the time the truce was supposed to take effect, Brigadier General Lul Ruai Koang, a spokesman for the opposition army, told IPS that the situation was far from calm.

“We are fighting almost everywhere,” he said, pointing to clashes that erupted in the Unity State towns of Dangdok and Duar, in Dolieb Hill of Upper Nile State, and Mathiang in Jonglei State. “The government violated the cessation of hostilities before it began. We have the right to defend ourselves with all the means at our disposal,” Koang added.

A disconnect between the delegates and their compatriots on the ground could render the cessation of hostilities agreement ineffectual.
On Saturday, government military spokesman Philip Aguer said attacks were still occurring.
“Rebel groups are attacking us; we are not seeing ceasefire from the other side,” Aguer told IPS, noting clashes north of Bor, the capital of Jonglei; and south of Malakal, the capital of Upper Nile. “We are committed to the ceasefire and will continue to observe it, but also maintain defense. It is the right of everybody to act in self defence.”

Political rivalries and ethnic tensions have long threatened stability in South Sudan, but the current conflict kicked off on Dec. 15 when animosity between President Salva Kiir and his deputy Riek Machar, who was sacked by the president in July, sparked a clash inside of a military barracks in Juba.

The ripple effect was devastating. Divisions between the country’s two largest ethnic groups – the Dinka, of which Kiir is a member; and the Nuer, largely loyal to Machar – spurred a worsening cycle of retaliatory attacks, murders, rapes, and looting.

The three-week negotiating phase that just wrapped up in Addis Ababa, Ethiopia’s capital, has been subject to cynicism. The talks were slow, held up first by matters of protocol – agreeing on terms of reference and setting the agenda – and then by mediators’ trips to South Sudan.

The talks were mediated by members of the Intergovernmental Authority on Development (IGAD), a bloc of eight East African countries. IGAD Envoy Seyoum Mesfin, Ethiopia’s former foreign minister, said during the ceremony that the signing was an “auspicious occasion,” but cautioned that “some settlements may only provide a temporary reprieve before violence escalates again.”

The final agreement is far from conclusive. The opposition was unable to secure a key concession from their counterparts: the release of 11 people who were detained by the government on allegations of attempting a coup. The prisoners include several high-ranking former officials who were instrumental in facilitating South Sudan’s independence from Sudan in 2011, including former Sudan People’s Liberation Movement (SPLM) secretary-general Pagan Amum.

“We claim that on our side that the politicians have been framed, and they are political prisoners. If they were out, it would nullify the government argument that this is a Nuer-Dinka thing,” opposition delegate Mabior Garang, son of the late independence hero John Garang, told IPS. “This is an uprising of the people of South Sudan. Once these people are released it will show the true national character of the uprising.”

Representatives of the United Nations, the European Union and the United States have urged Kiir to release the prisoners as goodwill gesture. But government delegates deferred the issue to South Sudan’s Ministry of Justice, saying that the detainees will be released in accordance with due process.

The agreement notes that “IGAD and the Partners of IGAD are firmly committed to undertake every effort to expedite the release of the detainees,” but does not include any similar commitment from the South Sudanese administration.

The negotiations will now go on hiatus for two weeks, after which point both sides will come together once again to haggle over the thorniest issues: the detainees, long-term mechanisms for monitoring a ceasefire, and sustainable political reconciliation.

As the process drags on, hundreds of thousands of people in South Sudan are struggling to cope with a grave humanitarian crisis. But they looked to the talks with a some optimism, Edmund Yakani, a South Sudanese activist who runs a Juba civil society group called the Community Empowerment for Progress Organisation, told IPS.

“There are hopes that the agreement will stop the military confrontation, and that a ceasefire will bring about dialogue. But the citizens have some critical questions. They are concerned about the issue of representation – whether these negotiations are only representative of people in power, who don’t understand the real challenges facing the people of the nation,” he said.

A disconnect between the delegates and their compatriots on the ground could render the cessation of hostilities agreement ineffectual. During the signing ceremony, Nhial Deng Nhial, who led the government delegation on behalf of Kiir, expressed doubts about the opposition’s ability to control the fighting.

“What really worries us in terms of the agreement on the cessation of hostilities is the capacity of the rebel group, given that the bulk of the rebel army is made up of civilians who are not subject to military discipline,” he said. “An order to stop fighting may not be obeyed, and this will certainly make a mockery of the agreement.”

Koang argues that the government is largely to blame for the clashes that took place on Friday, though the conflicts he cited occurred before the cessation was scheduled to begin.

“The government is on the offensive, trying to force us back,” he said. Asked whether the opposition would stick to a defensive role only, he said it depended on the situation. “Sometimes when you are attacked, you resist and you get the momentum, and to keep the momentum sometimes there is a need for us to push back.”

Currently the government is in control of three major towns in conflict zones: the Jonglei capital Bor, Unity capital Bentiu and Upper Nile capital Malakal. But the opposition says it controls most of the surrounding rural areas and maintains positions not far from the government-controlled cities. If the cessation of hostilities is adhered to, both sides will hang on to their territories while delegations work through the major issues.

But some argue that lasting peace will require the factions of South Sudan to dig deeper than the causes of the current crisis.

“I think it will work if they address the question of state-building,” said Yakani, adding that South Sudan has suffered under a one-party system that put ethnicity before democracy.

“Political institutions are based on ethnic backgrounds, and that compromises accountability and transparency. These conflicts are symptoms of a system where ethnicity has been politicised.”

Another issue is the presence of Ugandan troops in South Sudan, fighting on behalf of the government. Opposition delegates in Addis Ababa called for the forces to exit the country, but Thursday’s agreement made no direct mention of the their presence. Koang said on Saturday that Ugandan troops were still active on the government’s side.