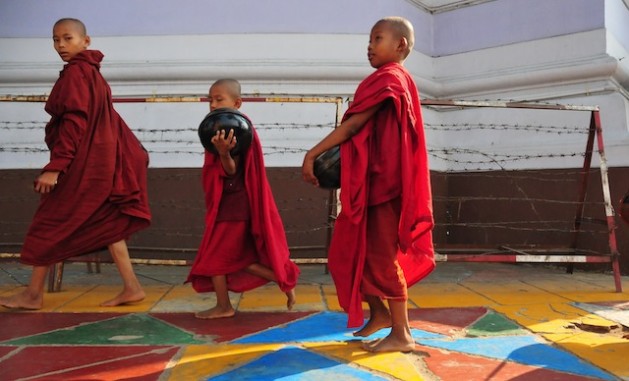 Novice monks beg for alms near the Sule Pagoda in downtown Yangon. The barbed wire barricades behind them were once a permanent feature on this busy road, but have been pushed aside to make way for peace. Credit: Amantha Perera/IPS

YANGON, Nov 21 2014 (IPS) - Myanmar is never out of the news for long. This has been the case since a popular uprising challenged military rule in 1988. For over two decades, the country was featured in mainstream media primarily as one unable to cope with its own internal contradictions, a nation crippled by violence.

Since 2011, with the release of pro-democracy icon Aung San Suu Kyi from house arrest, as well as democratic reforms, the country experienced a makeover in the eyes of the world, no longer a lost cause but one of the bright new hopes in Asia.

U.S. President Barack Obama has visited the country twice since 2011, most recently this month for the 9th annual East Asia Summit (EAS). 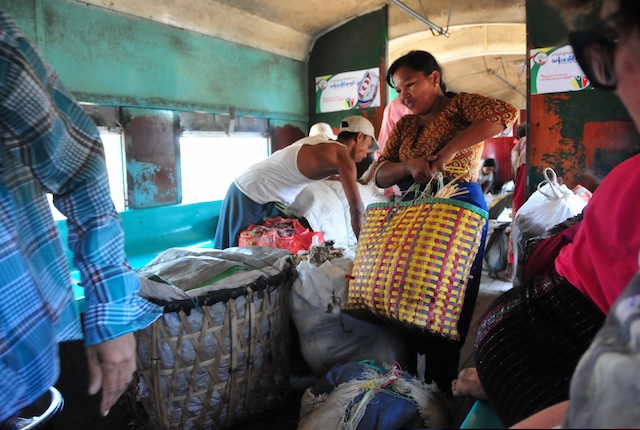 A woman loads bags full of vegetables on to a train carriage in Yangon. Many use the slow-moving passenger trains to transport goods that they will sell in outlying villages, since few can afford road transportation. Credit: Amantha Perera/IPS 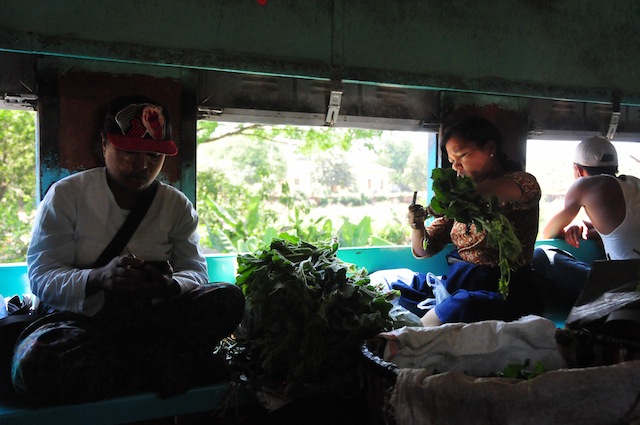 Arranging vegetables into small bundles, this vendor tells IPS she wakes up at three a.m. three days a week to collect her produce. She makes roughly three dollars each day. Credit: Amantha Perera/IPS

The commercial capital, Yangon, is in the midst of a construction boom, yet there are clear signs of lopsided and uneven development. By evening, those with cash to burn gather at popular restaurants like the Vista Bar, with its magnificent view of the Shwedagon Pagoda, and order expensive foreign drinks, while a few blocks away men and women count out their meagre earnings from a day of hawking home-cooked meals on the streets.

The former likely earn hundreds of dollars a day, or more; the latter are lucky to scrape together 10 dollars in a week. 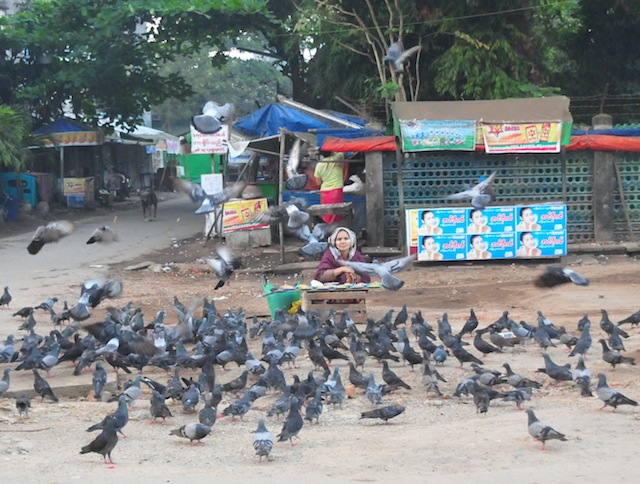 A woman waits for passersby to buy bird feed from her in Yangon. The World Bank estimates that over 30 percent of Myanmar’s 53 million people lives below the national poverty line. Credit: Amantha Perera/IPS 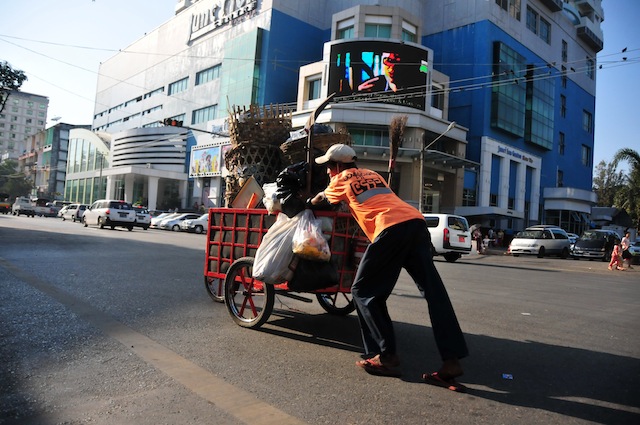 A man pushes a cartful of garbage near a busy intersection in Yangon. The 56-billion-dollar economy is growing at a steady clip of 8.5 percent per annum, but the riches are obviously not being shared equally. Credit: Amantha Perera/IPS

The World Bank estimates that the country’s 56.8-billion-dollar economy is growing at a rate of 8.5 percent per year. Natural gas, timber and mining products bring in the bulk of export earnings.

Still, per capita income in this nation of 53 million people stands at 1,105 dollars, the lowest among East Asian economies.

According to the World Bank’s country overview for Myanmar, “A detailed analysis – taking into account nonfood items in the consumption basket and spatial price differentials – brings poverty estimates as high as 37.5 percent.” 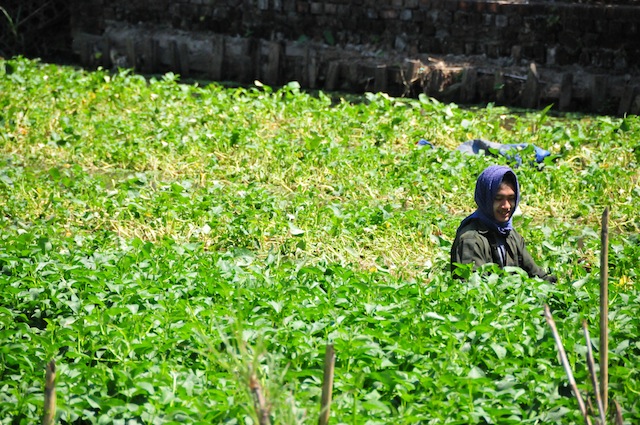 A man collects his harvest from a vegetable plot that is also a putrid water hole just outside of Yangon. The World Bank estimates that at least 32 percent of all children below five years of age in Myanmar suffer from malnutrition. Credit: Amantha Perera/IPS 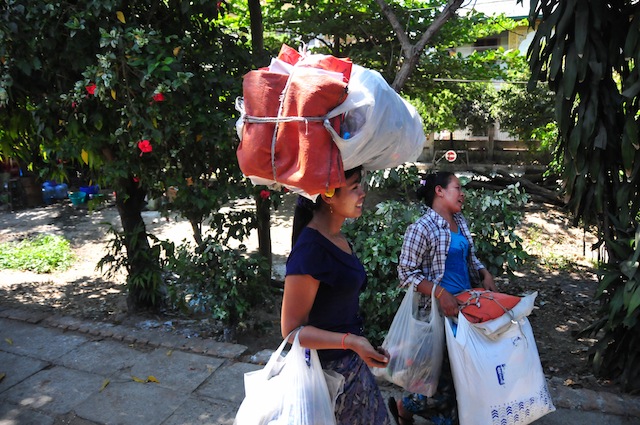 Women walk with heavy loads after disembarking from a train. Thousands still rely on the dilapidated public transport system, with its century-old trains and belching buses, because they cannot afford anything else. Credit: Amantha Perera/IPS

The country’s poor spend about 70 percent of their income on food, putting serious pressure on food security levels.

But these are not the only worrying signs. An estimated 32 percent of children below five years of age suffer from malnutrition; more than a third of the nation lacks access to electricity; and the national unemployment rate, especially in rural areas, could be as high as 37 percent according to 2013 findings by a parliamentary committee.

Over half the workforce is engaged in agriculture or related activities, while just seven percent is employed in industries. 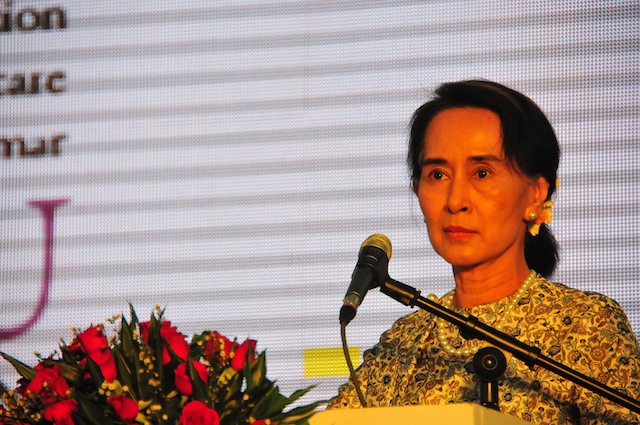 Democracy icon Aung San Suu Kyi admits that Mynmar suffers from a long list of woes, but insists that the first step to healing is the return of the rule of law. Credit: Amantha Perera/IPS 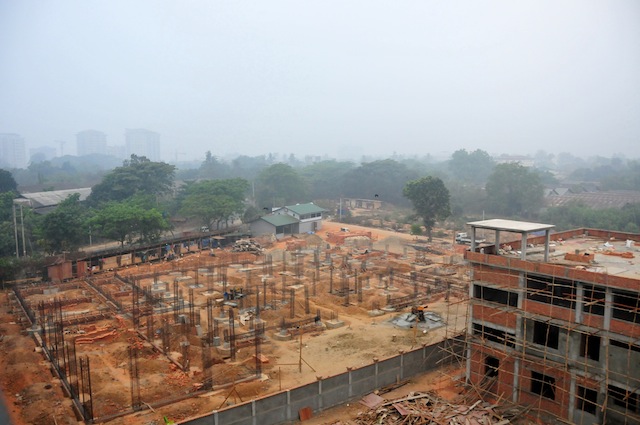 Large-scale construction is not unusual in downtown Yangon, where foreign investments and tourist arrivals are pushing up land prices. Officials say they expect around 900,000 visitors this year. Arrivals have shot up by 49 percent since 2011. Credit: Amantha Perera/IPS

Development banks call Myanmar a nation in ‘triple transition’, a nation – in the words of the World Bank – which is moving “from an authoritarian military system to democratic governance, from a centrally directed economy to a market-oriented economy, and from 60 years of conflict to peace in its border areas.” 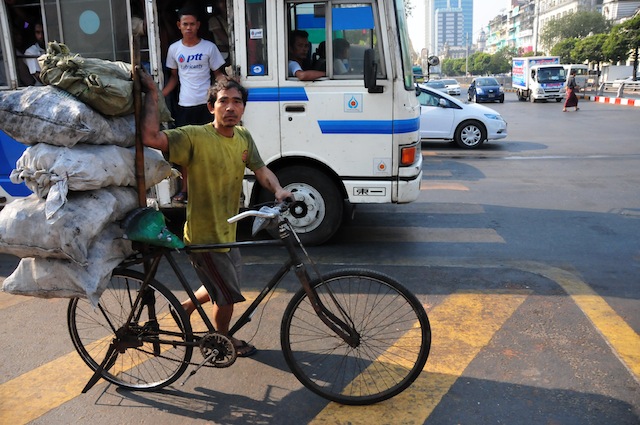 A man pushes his bicycles laden with scrap in the streets of Yangon. Despite rapid economic growth, disparities seem to be widening, with 10 percent of the population enjoying 35 percent of Myanmar’s wealth. Credit: Amantha Perera/IPS

The biggest challenge it faces in this transition process is the task of easing the woes of its long-suffering majority, who have eked out a living during the country’s darkest days and are now hoping to share in the spoils of its future.