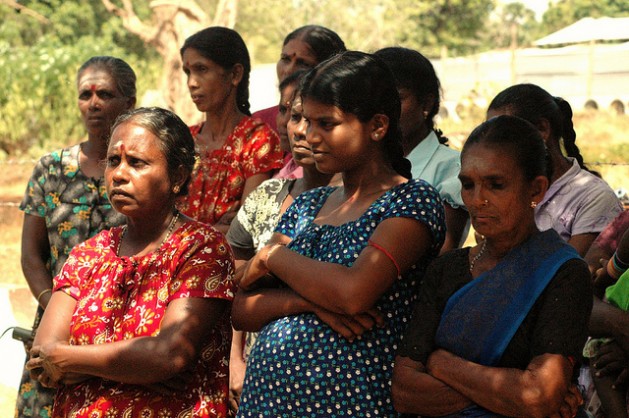 A pregnant woman waits in line for a medical check-up. Health indicators for women on Sri Lanka’s tea estates are lower than the national average. Credit: Amantha Perera/IPS

COLOMBO, Sep 23 2014 (IPS) - A mud path winds its up way uphill, offering views on either side of row after row of dense bushes and eventually giving way to a cluster of humble homes, surrounded by ragged, playful children.

Their mothers either look far too young, barely adults themselves, or old beyond their years, weathered by decades of backbreaking labour on the enormous tea estates of Sri Lanka.

Rani* is a 65-year-old mother of six, working eight-hour shifts on an estate in Sri Lanka’s Central Province. Her white hair, a hunched back and fallen teeth make her appear about 15 years older than she is, a result of many decades spent toiling under the hot sun.

She tells IPS that after her fifth child, overwhelmed with the number of mouths she had to feed, she visited the local hospital to have her tubes tied, but gave birth to a son five years later.

“If women are the primary breadwinners among the estate population, generating the bulk of household revenue in a sector that is feeding the national economy, then maternal health should be a priority." -- Mythri Jegathesan, assistant professor in the department of anthropology at Santa Clara University in California
Though she is exhausted at the end of the day, and plagued by the aches and pains that signal the coming of old age, she is determined to keep her job, so her children can go to school.

“I work in the estates so that they won’t have to,” she says with a hopeful smile.

Her story is poignant, but not unique among workers in Sri Lanka’s vast tea sector, comprised of some 450 plantations spread across the country.

Women account for over 60 percent of the workforce of abut 250,000 people, all of them descendants of indentured servants brought from India by the British over a century ago to pluck the lucrative leaves.

But while Sri Lankan tea itself is of the highest quality, raking in some 1.4 billion dollars in export earnings in 2012 according to the Ministry of Plantation Industries, the health of the labourers, especially the women, leaves a lot to be desired.

Priyanka Jayawardena, research officer for the Colombo-based Institute of Policy Studies of Sri Lanka, tells IPS that “deep-rooted socio-economic factors” have led to health indicators among women and children on plantations that are consistently lower than the national average.

The national malnutrition rate for reproductive-age mothers, for instance, is 16 percent, rising to 33 percent for female estate workers. And while 16 percent of newborn babies nationwide have low birth weight, on estates that number rises significantly, to one in every three newborns.

A higher prevalence of poverty on estates partly accounts for these discrepancies in health, with 61 percent of households on estates falling into the lowest socio-economic group (20 percent of wealth quintile), compared to eight percent and 20 percent respectively for urban and rural households.

Other experts say that cultural differences also play a role, since estate populations, and especially tea workers, have been relatively isolated from broader society.

“Many women are uneducated, and tend to be careless about their own health, and the health of their children,” a field worker with the Centre for Social Concern (CSC), an NGO based in the Nuwara Eliya district in central Sri Lanka, tells IPS.

“They have a very taxing job and so spend less time thinking about food and nutrition,” she states.

In fact, as Jayawardena points out, only 15 percent of under-five children on estates have a daily intake of animal protein, compared to 40-50 percent among rural and urban populations.

The same is true for daily consumption of yellow vegetables and fruits, as well as infant cereals – in both cases the average intake among children on estates is 40 percent, compared to 60 percent in rural and urban areas.

Breastfeeding patterns are also inadequate, with just 63 percent of estate workers engaging in exclusive breastfeeding for the first four months of a child’s life, compared to 77 percent in urban areas and 86 percent in rural areas, according to research conducted by the Institute of Policy Studies.

The situation is made worse by the demands of the industry. Since many women are daily wage labourers, earning approximately 687 rupees (just over five dollars) each day, few can afford to take the required maternity leave.

But even when alternatives are provided by the estate management, experts say, a lack of awareness and education leaves children without proper attention and care.

Jayawardena tells IPS that almost half of all women on estates drop out of school after the primary level, compared to a national dropout rate of 15 percent. Literacy levels are low, and so even awareness campaigns often fail to reach the targeted audience. 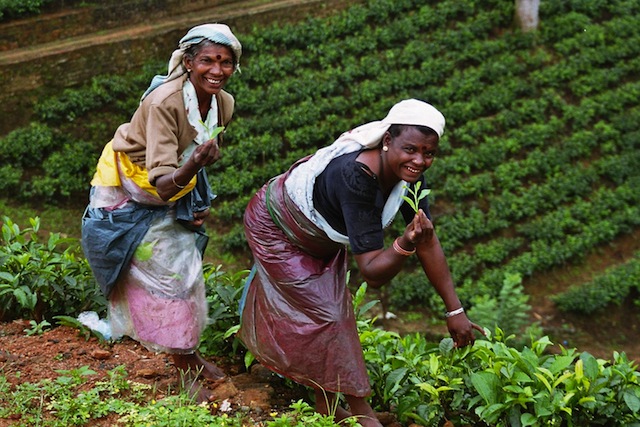 “Women on the estates do not believe they have many options in life beyond working on the plantations,” the CSC field officer says.

“Most are extremely poor, and from childhood they are exposed to very little – there are hardly any playgrounds, libraries, gathering places or social activities on the estates. So they tend to get married early and become mothers at a very young age.”

Though the national average for teenage pregnancies stands at roughly 6.4 percent, it shoots up to ten percent among estate workers, resulting in a cycle in which malnourished mothers give birth to unhealthy babies, who will also likely become mothers at a young age.

“If women are the primary breadwinners among the estate population, generating the bulk of household revenue in a sector that is feeding the national economy, then maternal health should be a priority,” Mythri Jegathesan, assistant professor in the department of anthropology at Santa Clara University in California, tells IPS.

“Any form of agricultural labour is hard on the body, and many of the estate workers in Sri Lanka work until they are seven or eight months pregnant. They need to be acknowledged, and more attention given to their wellbeing and health,” she adds.

Several NGOs and civil society organisations have been working diligently alongside the government and the private sector to boost women’s health outcomes.

According to Chaaminda Jayasinghe, senior project manager of the plantation programme for CARE International-Sri Lanka, the situation is changing positively.

The emergence of the Community Development Forum (CDF) introduced by CARE in selected tea estates is providing space and a successful model for inclusive development for estate communities, he tells IPS.

This has already resulted in better living conditions and health outcomes among estate communities while mainstreaming plantation communities into the larger society.