Renee Juliene Karunungan, 25, is the advocacy director of Dakila, a group of artists, students, and individuals in the Philippines committed to working towards social change, which has been campaigning for climate justice since 2009. Karunungan, who is also a climate tracker for the Adopt a Negotiator project, was in Bonn for the U.N. Framework Convention on Climate Change (UNFCCC) meetings.

BONN, Sep 5 2015 (IPS) - December 2015 will define the course of humanity’s survival at the crunch U.N. climate conference in Paris, known in technical jargon as the 21st Conference of Parties (COP21).

After two decades of meetings, this year’s COP is expected to see countries come up with a legally binding and universal agreement on climate, with the aim of keeping global warming below 2°C. 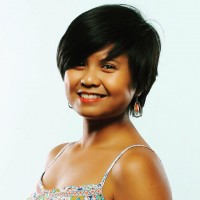 The world has warmed by 0.8°C since the pre-industrial period and it is clear to all where this has taken us – most recently, more than 6,000 dead from Typhoon Haiyan and 1,000 from the Pakistan heatwave, roads literally melted in India because of temperatures that reached 48°C and 1.29 million acres of farmland in Myanmar destroyed by the floods caused by torrential rains.

In the run-up to the Paris conference, the Ad Hoc Working Group on the Durban Platform (ADP), which is working to develop an agreement with legal force under the UNFCCC applicable to all, met in Bonn from Aug. 31 to Sep. 4 – in those five days alone, Dominica was suffering from the aftermath of Typhoon Erika, experts were reporting that 2015 will be the hottest year on record, and three Category 4 typhoons formed in the Pacific Ocean.

We are experiencing things we have not experienced before and they are happening fast.

After 20 years of negotiations, will countries finally make it right in Paris?

“COP21 is dangerously close to disappointing the world, with very little indication that both substance and process are moving towards a robust, ambitious, comprehensive, durable and fair agreement” – Yeb Sano, climate activist and former negotiator of the Philippines

“COP21 is dangerously close to disappointing the world, with very little indication that both substance and process are moving towards a robust, ambitious, comprehensive, durable and fair agreement,” said Yeb Sano, climate activist and former negotiator of the Philippines.

After the ADP meeting which has just ended in Bonn, there are only five more negotiating days left in October before COP21 in Paris, and countries are afraid to commit the same mistakes as they did at the COP meeting Copenhagen in 2009, which resulted in a failure to come up with a climate agreement.

However, six years later, the negotiations are still moving slowly.

“They keep on talking but nobody wants to compromise. There is no effort to negotiate,” said Tess Vistro of the Asia Pacific Forum on Women, Law and Development (APWD).

Young people took action on the last day of the negotiations in Bonn, calling for negotiators to “Speed it up!” and ensure that important issues such as loss and damage, human rights and long-term goals are given importance and included in any climate agreement.

Nevertheless, the ADP meetings in Bonn – no matter how slow – did give some flickers of hope. Australia and the United States, for example acknowledged the importance of loss and damage, especially for developing countries. However, whether they actually do something about it is another matter.

“It will take a tremendously gigantic effort by governments between now and November to make the Paris COP successful. This will entail unprecedented international cooperation which is anchored on ambitious climate action,” Sano said.

“It is about an agreement that recognises the dignity of the human condition. It is about a more just, safe, and sustainable world. It is a big goal, but one that I believe that humanity is capable of achieving,” he added.

With time running out, countries are being expected to make strong commitments to climate action. “Every country remains committed towards the final destination,” said Christiana Figueres, Executive Secretary of the UNFCCC.

The sincerity of this commitment will be judged by whether it translates into a fair, ambitious and legally-binding climate agreement in December. How much can every country put in? Will all countries commit to a fossil fuel-free economy by 2050? Will developed countries recognise their responsibility to developing countries? Will there be enough resources for adaptation?

There is still much left to be desired for the climate agreement, especially for developing countries and certainly much work to be done. Paris will be the make or break for humanity – will 2015 be the year we decide to come together and work towards a better future?