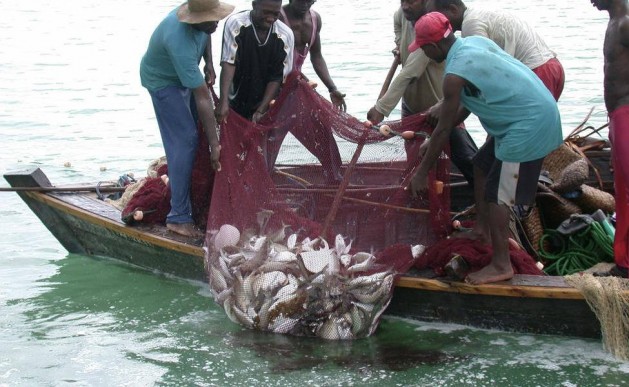 Studies show that indigenous fish species in Uganda – here being caught on Lake Victoria – have shrunk in size due to an increase in water temperature as a result of climate change. Credit: Wambi Michael/IPS

KAMPALA, Aug 22 2015 (IPS) - Climate change is reducing the size of several species of fish on lakes in Uganda and its neighbouring East African countries, with a negative impact on the livelihoods of millions people who depend on fishing for food and income.

Studies conducted on inland lakes in Uganda, including Lake Victoria which is shared by three East African countries, indicate that indigenous fish species have shrunk in size due to an increase in temperatures in the water bodies.

“What we are seeing in Lake Victoria and other lakes is a shift in the composition of fish. In the past, we had a dominance of bigger fish but now we are seeing the fish stocks dominated by small fish. This means they are the ones which are adapting well to the changed conditions,” said Dr Jackson Efitre, a lecturer in fisheries management and aquatic sciences at Uganda’s Makerere University.

“So if that condition goes on, he added, “the question is would we want to see our fish population dominated by small fish with little value?”

“We need to provide lake-dependent populations with an alternative for them to survive … If measures cannot be agreed and implemented quickly, then we are condemning those communities to death” – Dr Justus Rutaisire, responsible for aquaculture at Uganda’s National Agriculture Research Organisation (NARO)
In Uganda, the fisheries sector accounts for 2.5 percent of the national budget and 12.5 percent of agricultural gross domestic product (GDP). It employs 1.2 million people, generates over 100 million dollars in exports and provides about 50 percent of the dietary proteins of Ugandans.

Efitre was one of the researchers for a study on ‘Application of policies to address the influence of climate change on inland aquatic and riparian ecosystems, fisheries and livelihoods”, which examined the influence of climate variability and change on fisheries resources and livelihoods using lakes Wamala and Kawi in the Victoria and Kyoga lake basins as case studies.

It also looked at the extent to which existing policies can be applied to address the impacts of and any challenges associated with climate change.

The study’s findings showed that temperatures around the two lakes had always varied but had increased consistently by 0.02-0.03oC annually since the 1980s, and that rainfall had deviated from historical averages and on Lake Wamala – although not Lake Kawi – had generally been above average since the 1980s.

According to the study, these findings are consistent with those reported by the United Nations Intergovernmental Panel on Climate Change (IPCC) in 2007 and 2014 for the East African region.

Mark Olokotum, one of the study’s researchers, climate changes have affected the livelihoods of local fishing communities.

“These are fishers who depend on the environment. You either increase on the number of times you fish to get more fish or get more fishing gear to catch more fish. And once that happens, you spend more time fishing, earn much less although the price is high, and there are no fish so people have resorted to eating what is available,” he said.

Olokotum told IPS that the water balance of most aquatic systems in Uganda is determined by rainfall and temperature through evaporation.

He said that about 80 percent of the water gain in Lake Wamala was through rainfall while 86 percent of the loss was through evaporation, resulting in a negative water balance and the failure of the lake to retain its historical water levels.

“Therefore, although rainfall in the East African region is expected to increase as a result of climate change, this gain may be offset by increased evaporation associated with increases in temperature unless the increases in rainfall outweigh the loss through evaporation,” Olokotum explained.

These changes have made life more difficult for people like Clement Opedum and his eight sons who have traditionally depended on lakes as a source of food and income.

Opedum’s living has always come from the waters of Lake Wamala. In the past, sales of tilapia fish from the lake to neighbouring districts were brisk; and some would be bought by traders from the Democratic Republic of Congo, sustaining his family and other fishermen.

Those days are now gone. Over the years, the lake has steadily retreated from its former shores, leaving Opedum and his neighbours high and dry, and faced with the prospect that the lake could vanish entirely.

Charles Lugambwa, another fisherman in the same area, has been obliged to turn to farming, and he now grows yams, sweet potatoes and beans on land that was previously under the waters of the lake.

Lugambwa told IPS that apart from tilapia fish, other species have started disappearing from the lake in 30 or so years he has lived there.  “In 1994, the lake dried up completely but came back in 1998 following heavy rains,” he told IPS. “We used to catch very big tilapia but now they are quite tiny even though they are adult fish.”

Scientists and researchers argue that the causes of lake shrinking include water evaporation, increased cultivation on banks, cutting down of trees and destruction of wetlands, while the reduction in the size of tilapia has been linked to increased lake water temperature as a result of global warming.

Dr Richard Ogutu-Ohwayo, senior research officer at the National Fisheries Resources Research Institute (NaFFIRI) told IPS that the response to the impacts of climate change in Uganda had been concentrated on crops, livestock and forestry with almost no concern for the fisheries sector.

“It is high time government took the bold step to bring aquatic ecosystems and fisheries fully on board in its climate change responses,” he said.

According to Ogutu–Ohwayo, the United Nations Framework Convention on Climate Change (UNFCCC) and the East African Community Policy on Climate Change commit states to building capacity, generating knowledge, and identifying adaptation and mitigation measures to reduce the impacts of climate change, however these have barely been implemented.

Ogutu-Ohwayo who was part of the lake study research team, told IPS that Uganda has a water policy which provides for protection and management of water resources, and “we must apply these policies to manage the water resources of lakes Wamala, Kawi and other lakes through integrated approaches such as protecting wetlands, lake shores and river banks and controlling water extraction.”

Like other East African nations, Uganda has relied heavily on capture fisheries, or wild fisheries, with a tendency to marginalise aquaculture as far as resource allocation and manpower development is concerned.

Fish processing plants around Lake Victoria, for example, are now operating at less than 50 percent capacity, while some have closed down.

Dr Justus Rutaisire, responsible for aquaculture at Uganda’s National Agriculture Research Organisation (NARO), told IPS that aquaculture could be used as one of the adaptation measures to help communities that have depended on fish to supplement capture fisheries.

He noted, however, that the development of aquaculture in most Eastern African countries is constrained by low adoption of appropriate technologies, inadequate investment in research and inadequate aquaculture extension services.

“We need to provide lake-dependent populations with an alternative for them to survive and that is why we are asking government to invest in aquaculture,” said Rutaisire. ”If measures cannot be agreed and implemented quickly, then we are condemning those communities to death,” he warned.