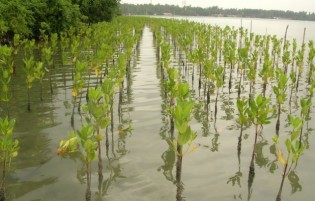 The “Kidneys of the Earth” Are Disappearing

By Baher Kamal
This is about Wetlands, which are considered as a natural solution to the global threat of climate change. They absorb carbon dioxide, help slow global heating and reduce pollution, hence they are often referred to as the “Kidneys of the Earth”.

By Stephen Leahy
Everyone knows water is life. Far too few understand the role of trees, plants and other living things in ensuring we have clean, fresh water.

By Danilo Valladares
"Many tourists come to this area for bird watching, but the terrible deforestation is leading to the disappearance of so much of our flora and fauna. The cleared land is used for cattle ranching,” said Haroldo Figueroa, who works as a guide in nature reserves along Guatemala’s Caribbean coast.
ADVERTISEMENT ADVERTISEMENT