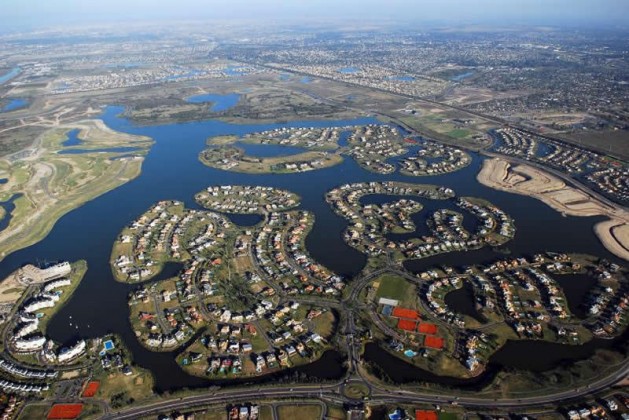 Part of the Nordelta gated community in the Paraná river delta, which led the new trend of building private neighbourhoods on the rivers and canals of Greater Buenos Aires. The community is made up of 11 neighbourhoods and is dubbed a “city-ville”. Credit: Elinmobiliario.com

BUENOS AIRES, Nov 24 2014 (IPS) - The construction of gated communities on wetlands and floodplains in Greater Buenos Aires has modified fragile ecosystems and water cycles and has aggravated flooding, especially in poor surrounding neighourhoods.

In the 1990s a high-end property boom led to the construction of private neighbourhoods in vital ecosystems, and the emergence of barriers – actual walls – between social classes in the suburbs of Buenos Aires.

In the first week of November, the “sudestada” or strong southeast wind left 19 municipalities in and around Buenos Aires under water.

“But in the last five years we have seen a new phenomenon: flooding from rainfall, and it’s no coincidence that it happens mainly in neighbourhoods located next to gated communities built over the last decade.” -- Martín Gianella

The sudestada is a phenomenon that affects the Rio de la Plata basin. It consists of a sudden rotation of cold southern winds to the southeast, bringing strong winds and heavy rain. In the first week of November the wind gusts reached over 70 km an hour and more rain fell in two days than the total forecast for two months. Rivers overflowed their banks, large areas were flooded and cut off, and more than 5,000 people were evacuated.

Jorge Capitanich, President Cristina Fernández’s cabinet chief, attributed the floods to “a combination of sudestada, heavy rains, and the saturation of the water basins.”

But Patricia Pintos of the University de la Plata’s Centre of Geographic Research said this confluence of factors was aggravated by the growing urbanisation and the proliferation of “barrios náuticos” – closed private neighbourhoods built on the water.

Many of these wealthy private neighbourhoods have been built on floodplains and wetlands, ecosystems that are vital to water drainage.

The new urban developments have advanced on areas that play a crucial role in managing floods, she said.

“Wetlands are getting stopped up by housing developments that ironically promote a lifestyle associated with enjoying water and nature,” Laila Robledo, an urban planner at the General Sarmiento National University, told Tierramérica.

Four of the municipalities in the lower stretch of the Luján river basin most affected by the growth of high-end neighbourhoods on floodplains and wetlands are Pilar, Campana, Escobar and Tigre, which cover more than 7,000 hectares. 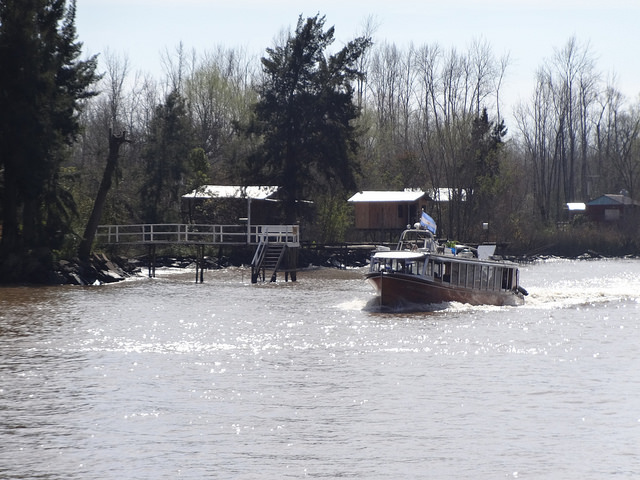 Traditional houses on stilts in Tigre along the Arias canal in the Paraná river delta. These traditional neighbourhoods have suffered the environmental and social impacts of the construction of gated communities for the wealthy that are built on land prone to flooding. Credit: Fabiana Frayssinet/IPS

“The emergence of 65 housing developments of this kind modified the terrain at the mouth of the river and blocked drainage during weather events like the ones we experienced this month,” Pintos said.

These neighbourhoods, which the expert described as “polderised closed housing developments” – a reference to polders or low-lying tracts of land enclosed by dikes – “entail major modifications of the natural topographical characteristics, not only to raise the level of the ground in order to build housing but also to create new bodies of water.”

That involves, for example, excavating to build artificial lakes and using the dirt to fill in low-lying areas.

And because these housing developments are in flood-prone areas, embankments six to 10 metres high are built around them to keep water out.

“They protect these developments but they work as dikes that contribute to flooding in surrounding neighbourhoods…What protects them hurts those who are outside,” Pintos said.

Ten percent of the 350,000 inhabitants of Tigre live in gated communities, which cover half of the municipality’s land area, Martín Gianella, the municipal general secretary, told Tierramérica.

“This is what we call a model of socio-territorial segregation,” he said. “Walls are dividing the territory and society.”

Gianella said that Tigre, on the north side of Greater Buenos Aires, has historically suffered from flooding during the sudestadas.

“But in the last five years we have seen a new phenomenon: flooding from rainfall, and it’s no coincidence that it happens mainly in neighbourhoods located next to gated communities built over the last decade,” he added.

The official urged the municipal government to oversee and regulate the construction of private neighbourhoods “and to levy a special tax on these mega-developments, to invest in the necessary hydrological works.”

Robledo, the urban planner, stressed that changes in the hydrologic regimes don’t only affect the areas near the gated communities, because Buenos Aires was built on a plain crisscrossed by rivers.

“The city is part of an urban metabolism – what happens in one place affects the rest,” she explained. That is why solutions must be “interjurisdictional,” she added.

According to Robledo, the construction of these gated communities “favours the privatisation of the city and real estate speculation, to the detriment of the rest of the population.”

Driven by the profit motive, “the companies buy up historically cheap land prone to flooding, fill it in to make it inhabitable, and earn extraordinary profits,” she said.

Pintos said “this is the result of the growth of a model of urban development followed by municipalities that are prone to favouring big investment flows.”

Pintos and Robledo agreed that while regulations and maps of socio-environmental risks posed by this kind of housing development exist, they are not enforced.

Big real estate entrepreneurs in the province of Buenos Aires, like Gonzalo Monarca, the president of the Grupo Monarca, deny that they are responsible for the problems, which they blame on climate change.

“That’s a fallacious argument,” Robledo said. “Climate change is happening at a global level, but the consequences are stronger or weaker depending on the way cities have been built and inhabited.”

“If we build in a drainage basin that receives overflow when the water level in the river goes up, it’s obvious that the water is going to run off into other areas,” she said.

Robledo stated that if this kind of housing development is not banned or regulated, cities will be flooded more frequently and for longer periods of time, even when the rainfall is not particularly heavy.

Pintos went even further, calling for solutions that are “not very popular” in political terms, and which may be complex and burdensome, but which she said should not be ruled out if the problem continues to grow.

As an example, she cited the relocation of families from the banks of the Mississippi river in New Orleans, after Hurricane Katrina in 2005.

Other intermediate solutions, she said, would be to prohibit the construction of new private neighbourhoods in fragile ecosystems, and a review of the permits already granted.

She also said companies should assume the costs of remediation of environmental problems, although such works would be a “bandaid in the face of a critical situation that could have been avoided if rationality had prevailed.”

Leandro Silva, the head of environment at the Defensoría del Pueblo de la Nación – Argentina’s ombudsperson’s office – pointed out to Tierramérica that in 2010 his office warned the municipalities of Zárate, Campana, Escobar, Tigre and San Fernando about the risks posed by the expansion of gated communities in the ecosystem of the Paraná river delta, and urged them to respect environmental impact studies and to impose strict controls.

“The recurrent flooding and the impact on the most vulnerable segments of society make it necessary to reinforce these mechanisms and proactively exercise prevention, implementing in the watersheds all of the environmental management instruments required by our legislation: environmental impact assessments, citizen participation, environmental zoning and access to public information,” he said.