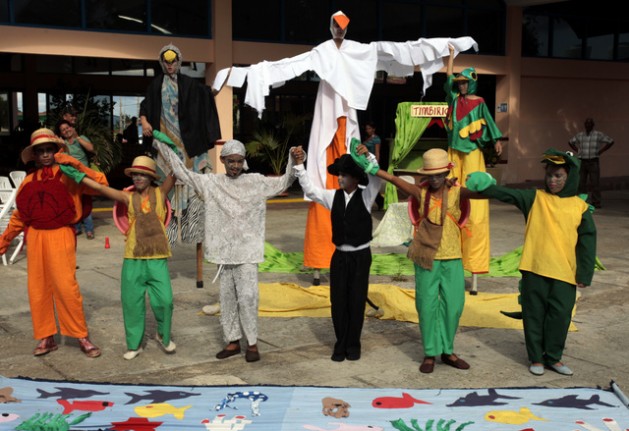 CIÉNAGA DE ZAPATA, Cuba , Nov 28 2013 (IPS) - The 18 communities in Cuba’s Ciénaga de Zapata, the largest wetlands in the Caribbean, have long survived on the abundant local hunting and fishing and by producing charcoal. But that is no longer possible, due to climate change.

Years ago it was inconceivable that the people living in the Zapata Swamp, a UNESCO-recognised biosphere reserve in western Cuba, would one day stop using the forest here to make charcoal, extract precious wood, or hunt crocodile and deer.

“We used to pillage the flora and fauna,” said one local resident, Mario Roque, who lives on the small secluded bay of Batey Caletón, 200 km southeast of Havana. “I even poached as a fisherman. But I learned how to make a better living while causing less damage to nature,” he told IPS.

Enterprising residents of the wetlands like Roque have been spontaneously exploring green-friendly ecotourism initiatives, small animal production and small gardens, none of which were common in this area, where people have always been hunters, gatherers and fishers.

Roque, or “Mayito”, as he is known to everyone, started renting out four rooms in his house to tourists after Cuba’s communist government expanded the scope of private initiative in 2010.

Like him, many local residents in Playa Girón, Playa Larga, Caletón and other coastal communities in the wetlands have hung up “Rooms for rent” signs on the front of their homes.

Just 9,300 people live in the 4,322-sq-km Ciénaga de Zapata, the most sparsely populated municipality in this country of 11.2 million people.

The area’s wealth lies in its vast forests, swamps that cover 1,670 sq km, and more than 165 migratory and autochthonous species, like the Cuban crocodile (Crocodylus rhombifer).

In 2000, UNESCO – the United Nations Educational, Scientific and Cultural Organisation – declared the wetlands, which occupy the entire Zapata peninsula and surrounding areas, a biosphere reserve. A year later, the Ramsar Convention included it on its list of wetlands of international importance.

“The tourists who come here are nature lovers, and they feel happy when they see we love nature too,” said Roque, who serves his guests lionfish (Pterois antennata), an exotic invasive species that is damaging the peninsula’s marine ecosystem.

“Every day I have to dive deeper to find a lionfish,” he said proudly.

He feeds his guests eggs and rabbit meat from his own small livestock, as well as herbs, spices and vegetables that he grows in his ecological garden. On the rooftop terrace he has a solar water heater made out of recycled plastic bottles and cans. “I’ve been saving 500 pesos [20 dollars] a month since I installed it,” he said.

Almost without realising it, Roque has adopted adaptation measures to global warming, a phenomenon that could raise the water level in the sea here 85 cm by 2050, which would affect between 60 and 80 percent of the swamp, said geographer Ángel Alfonso.

The wetlands cover 9.3 percent of Cuba’s land surface, and are extremely vulnerable and at the same time crucial for mitigating the predicted rise in temperature, intrusion by the sea and increase in extreme weather events, he explained to IPS.

“They protect life inland,” he stressed, because they filter and purify contaminated water while serving as coastal barriers against high tides, hurricanes and the salinisation of fresh water. A full 25 percent of the net productivity of Cuba’s ecosystems and more than 40 percent of its environmental services depend on the wetlands.

The Ciénaga de Zapata, in the province of Matanzas, has weak points when it comes to weathering future threats, even though it is the best-preserved wetlands system in the Caribbean islands, Alfonso said.

Its surface and underwater water have been salinised, the swamp system has been fragmented, and there are imbalances in its ecological functioning, he said.

Nor have the felling of trees and poaching of protected or endangered species like the Cuban crocodile been completely eliminated, just as there are still illegal charcoal kilns that use wood from off-limits species such as mangroves.

“When you take a boat along the coast, you see crocodile hunters and charcoal ovens in the forest,” a biologist who spoke on condition of anonymity told IPS.

Leyaní Caballero with the science, technology and environment ministry’s delegation in the swamp said “there are laws and regulations that protect these resources, but they are not always enforced. Some people violate them out of ignorance or because it is the only way they know how to meet their needs.

“A management mechanism should be created so that people living in the reserve benefit from the forest, without being driven by the profit motive,” she said. “Nor is there an integral sustainable development plan, in line with the country’s general strategies.”

That and other problems were raised in the workshops organised by the project “Transformation for local development in small community groups in the Ciénaga de Zapata”, dedicated to training local leaders – 20 last year and 27 this year – most of whom were already running nature-friendly enterprises.

“We try to guide people a little towards a better kind of development,” one of the local leaders, Antonio Gutiérrez, told IPS. He combines his carpentry work with raising birds like cockatoos.

Gutiérrez is taking part in the project to get more people involved in his economic activity, “which creates awareness about taking care of birds.”

Once a month the project holds meetings with local craftspersons, people who raise livestock for family consumption, ecotourism promoters, and farmers who use agroecological techniques or grow ornamental plants, who have all come together with the hope of improving their own lives and those of their communities.

Together they assess the problems and learn about issues like leadership and marketing, to seek solutions.

“We don’t have to wait for all the food to be brought in from other parts of the country,” said Aliuska Labrada, a homemaker who rounds out her family’s diet with cassava, squash, guava, mango and other food grown in the rocky, saline soil of her garden, in Cayo Ramona (Ramona Key).

One of the most significant results of the project so far has been helping to create the first agricultural cooperative in the municipality, Caballero stressed. It joined the ranks of the 5,688 cooperatives operating in Cuba today.

The initiative was supported by the government’s local environmental delegation, with support from the Fundación Nicolás Guillén and the Swiss NGO Zunzún.

To strengthen the protection of the wetlands, the Cuban government made a submission to UNESCO in 2003 for the Ciénaga de Zapata to be declared a World Heritage Site.