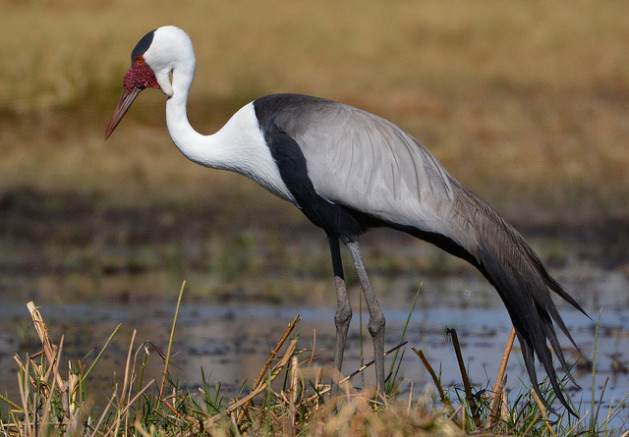 There are an estimated 80 breeding pairs of wattled cranes remaining in South Africa, and the total population is less than 260. Credit: Ian White/CC By 2.0

Separated from Smith’s binoculars by a swathe of golden brown grass, the water pooled in the wetland basin that sources the Umgeni River glistens in the mild sunshine as it winds its way for 265 km to meet the ocean at Durban’s coastline.

“We’ve got two pairs [of wattled cranes] nesting in here at the moment,” Smith, a senior field officer with the African Crane Conservation Programme told IPS. A week earlier she had flown over the wetland for an annual aerial survey of the critically endangered birds. The birds can grow taller than five feet and are characterised by a bumpy red patch of skin between their beaks and eyes.

There are an estimated 80 breeding pairs of wattled cranes remaining in South Africa. The total South African population is less than 260.

To maintain Umgeni Vlei’s biodiversity and protect the regal cranes’ habitat, the South African government declared the reserve a Ramsar Site in April this year, giving it special protection as a “wetland of international importance” under the Ramsar Convention, an international treaty on the protection of wetlands.

Wetlands on the land owned by Ivanhoe Farming Company, of which Campbell is a director, serve as home to up to six breeding pairs of wattled cranes. To help conserve them, Campbell has designated 800 hectares of farmland which buttress the reserve.

This is a protected area with nature reserve status through the KwaZulu-Natal Biodiversity Stewardship Programme run by provincial government body Ezemvelo KwaZulu-Natal Wildlife.

“I think cranes and agriculture can co-exist,” Campbell told IPS. “Most farmers, I find, are conservation-minded.”

South Africa’s population of wattled cranes dwindled through the 1980s, largely due to deaths related to flying into power lines, as well as intentional and unintentional poisoning, Smith said. Population numbers bottomed out in the early 2000s and have gradually increased since, thanks to conservation efforts and increased tagging of power lines, she said.

The cranes are the most wetland-dependent species of crane in South Africa and use their spear-like beaks to forage on bulbs in wetland regions, Smith said. The birds are highly territorial and rely on the permanent wetlands at the Umgeni Vlei Nature Reserve and surrounding private land for food, mating and nesting.

The KwaZulu-Natal province is at the heart of wattled crane activity and is home to about 90 percent of the country’s population. Many of these cranes reside in the Umgeni iver’s upper catchment area.

“If we lose the birds in these territories then we won’t have a viable population in the country,” said Smith.

Since wetlands are the most threatened of all South Africa’s ecosystems, according to South Africa’s 2011 National Biodiversity Assessment, the cranes’ survival is closely tied to wetland conservation. At the same time, the birds serve as an “indicator species” – their presence signals good wetland health.

“If you have wattled cranes [on wetlands], you know you have good water quality and the biodiversity is in good stead,” Ann Burke, conservation projects manager at the KwaZulu-Natal Crane Foundation told IPS.

While the Umgeni Vlei Nature Reserve’s designation as a Ramsar site offers protection to wattled cranes, it is only a small sliver of land of 958 hectares. Campbell is helping protect the birds, and ensure they have areas where they can breed unhindered. He has designated an 800-hectare segment of his farmland as reserve, and has agreed to manage it as such.

The reserve status granted to the designated land at Ivanhoe will be written into the title deeds of the farm. The protected land remains privately owned, and does not become government land, but the reserve status is binding if it is sold to new owners.

Such stewardship agreements offer longstanding protection against development and farming practices that could put fertiliser run-off into the wetland system, the World-Wide Fund for Nature’s (WWF) Susan Viljoen, who is facilitating negotiations between landowners and the government for the biodiversity stewardship agreements told IPS.

“It’s a far stronger guarantee that your land, and those farms, will be managed in a way that is compatible for the birds and for their breeding,” said Viljoen. “The main thing is that you’ve got this permanently open relationship and communication between conservation groupings and the landowner.”

Another landowner in the region has signed a similar stewardship agreement for 635 hectares of land, while the WWF is negotiating with six other landowners to protect portions of their lands, which total 7,569 hectares, said Viljoen.

“To someone who doesn’t really understand the detail of this process it almost might sound like that’s not very many,” she said. “But what I’ve learned through facilitating this process myself is stewardship is long and it’s slow, but the thing is – once it’s in place it’s forever.”

Two wetland areas on the Ivanhoe Farm that were drained and converted to pastures for cattle grazing decades ago will also be rehabilitated through the government’s Working for Wetlands programme. Although it could take up to 10 years for the wetlands to return to a state where they can support wattled cranes, Campbell hopes to see birds inhabiting them in future.

“We can see what we’ve done wrong in the past,” said Campbell. “And this is a chance to correct it.”