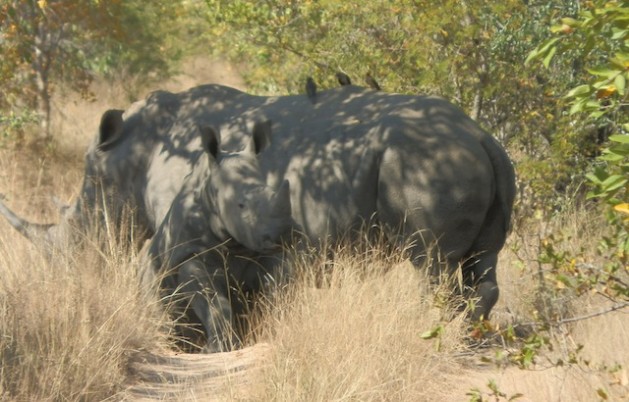 CAPE TOWN, South Africa, Apr 18 2013 (IPS) - In the face of rampant rhino poaching in South Africa, some conservationists and private rhino farmers are lobbying for removal of the international ban on rhino horn trading and the creation of a legal market, to quell poaching.

“The trade ban is creating a situation where rhinos are being killed unnecessarily,” Duan Biggs, research fellow at the Centre of Excellence for Environmental Decisions at Australia’s University of Queensland, told IPS. “It’s taking resources away from other conservation efforts, and is leading to the situation where there’s a pseudo war taking place in the Kruger National Park.”

The South African government is exploring this option and could make a proposal at the 2016 Convention on Trade in Endangered Species of Wild Fauna and Flora (CITES) to allow it to open up rhino horn sales. That would require support from a two-thirds majority of the 178 member states.

Proposals to lift the ban, which has been in place since 1977, have sparked debate about whether a legal market would actually curb poaching. Opponents worry that it would stimulate the black market trade that exists in parts of Asia, where rhino horn sells for 65,000 dollars a kilogramme – more than gold or cocaine – and is touted as a cure for hangovers and an aphrodisiac in countries like Vietnam.

But advocates say it would be the solution to the poaching crisis.

In an Apr. 3 press statement, the government said that the number of rhinos killed since the start of 2013 totalled 203. Poaching has roughly doubled each year over the past five years in South Africa.

If poaching continues at the current rate, the Kruger National Park’s rhino population will start to decline from 2016, according to South African National Parks researchers. Worse, scientists estimate that if poaching accelerates, Africa’s rhino could be extinct in the wild in just 20 years.

A tightly-regulated market would offer a way to supply the persistent Asian demand, and, if properly administered, prove cheaper, safer and more reliable for buyers than purchasing from criminal cartels. This would draw buyers away from the illegal market, explains Biggs, who co-authored a paper in the March issue of the journal Science calling for the introduction of legal trade.

“The idea is to cut (illegal traders) out of the market,” Michael ‘t Sas-Rolfes, an independent conservation economist who researches the rhino horn trade, told IPS. “They are dealing in a lot of other products. If it becomes unattractive to them they’ll simply switch to something else.”

The legal trade in crocodile skins, which during the 1980s led to a shift toward sustainable crocodile ranching instead of the slaughter of wild crocodiles, is an example of how legal trade can drive conservation, says Biggs.

To be effective, advocates propose that an independent body – a central selling organisation – that reports to CITES would run the market and sell horns to registered buyers. Part of the revenue from sales would be channelled to conservation efforts and used to strengthen anti-poaching initiatives.

Rhino horn is made of keratin, found in human hair, and grows back after being cut. Sedating rhino and shaving off their horns carries “completely minimal risk” to the animals, says Biggs.

To stop poached horn from entering the legal market, suppliers can fit legal horns with traceable transponders and DNA signatures for less than 200 dollars per horn, he says.

But various conservation groups oppose legal trade. They argue that legalisation could drive demand for rhino horn to a point the market could not sustain and create a situation where the criminal market would flourish alongside the legal one, as is the case with abalone, which is severely threatened by poaching in South Africa.

Mary Rice, executive director of the Environmental Investigation Agency, an independent organisation committed to investigating and exposing environmental crime, points to the spike in illegal ivory sales in China after it legally bought stockpiles of ivory from Botswana, South Africa, Namibia and Zimbabwe in 2008.

The Chinese government bought ivory for 157 dollars/kg but sells it for up to 1,500 dollars/kg. Retailers, however, sell ivory products for as much as 7,000 dollars, according to an Environmental Investigation Agency report.

But as much as 90 percent of the ivory that enters the market in China is illegal, according to the report.

“Legal ivory is now more expensive than illegal ivory, and what you have is the biggest upsurge in poaching since the (1989) ban (on international ivory trade),” Rice told IPS.

Legal trade opponents are concerned governments would not be able to adequately police the rhino horn market, and cite corruption as a problem. Last year, police arrested four South African National Parks officials in connection with rhino poaching, who are out on bail.

Accurate figures for the actual size of the rhino horn market are not available.