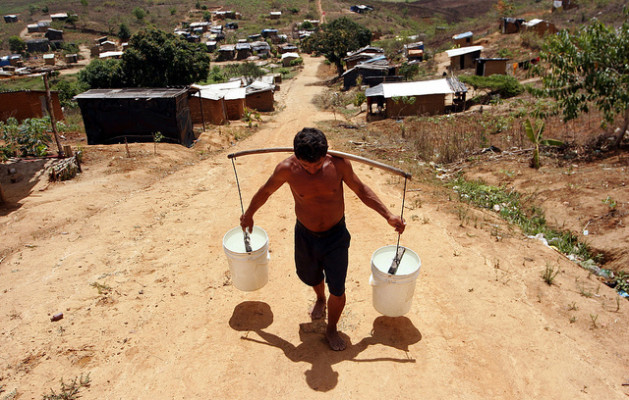 UXBRIDGE, Canada, May 21 2013 (IPS) - Everyone knows water is life. Far too few understand the role of trees, plants and other living things in ensuring we have clean, fresh water.

This dangerous ignorance results in destruction of wetlands that once cleaned water and prevented destructive and costly flooding, scientists and activists warn.

"We have accelerated major processes like erosion, applied massive quantities of nitrogen that leaks from soil to ground and surface waters and, sometimes, literally siphoned all water from rivers." -- GWSP's Anik Bhaduri

Around the world, politicians and others in power have made and continue to make decisions based on short-term economic interests without considering the long-term impact on the natural environment, said Anik Bhaduri, executive officer of the Global Water System Project (GWSP), a research institute based in Bonn, Germany.

“Humans are changing the character of the world water system in significant ways with inadequate knowledge of the system and the consequences of changes being imposed,” Bhaduri told IPS.

The list of human impacts on the world’s water – of which only 0.03percent is available as freshwater – is long and the scale of those impacts daunting.

“We have accelerated major processes like erosion, applied massive quantities of nitrogen that leaks from soil to ground and surface waters and, sometimes, literally siphoned all water from rivers, emptying them for human uses before they reach the ocean,” Bhaduri said.

On average, humanity has built one large dam every day for the last 130 years, which distorts the natural river flows to which ecosystems and aquatic life adapted over millennia. Two-thirds of major river deltas are sinking due to pumping out groundwater, oil and gas. Some deltas are falling at a rate four times faster than global sea level is rising.

More than 65 percent of the world’s rivers are in trouble, according to one study published in Nature in 2010. Those findings were very “conservative” since there was not enough data to assess impacts of climate change, pharmaceutical compounds, mining wastes and water transfers, Charles Vörösmarty of the City University of New York previously told IPS.

Recently, China’s First National Census of Water discovered they’d lost more than 28,000 rivers compared to just 20 years ago. Most experts blame the loss on massive overuse and engineering projects to shift water from one region to another.

“We treat symptoms of environmental abuse rather than underlying causes…by throwing concrete, pipes, pumps, and chemicals at our water problems, to the tune of a half-trillion dollars a year,” said Vörösmarty, who is also co-chair and a founding member of the GWSP.

As these problems continue to mount, the public is largely unaware of this reality or its growing costs, he said in a release.

World experts are meeting in Bonn, Germany this week to consolidate this understanding and offer policy makers solutions to prevent ongoing damage to the global water system.

The Water in the Anthropocene conference will also make recommendations on how decision makers can adapt to the multiple challenges of growing water use, declining ecosystems and climate change.

The public and policy makers are not aware of these huge water challenges, said water expert Janos Bogardi, senior advisor to GWSP. Education aside, there is an overwhelming need to have well-defined global water quantity and quality standards that meet the needs of people, agriculture and healthy ecosystems.

The upcoming U.N. Sustainable Development Goals are expected to include “water security”, which is huge step forward, Bogardi told IPS.

“Defining these interrelated needs is huge challenge for scientists and politicians alike,” he said.

Reasonable daily water use to meet sanitary needs and drinking is 40 to 80 litres, but U.S. per capita daily use is over 300 litres, while Germany is 120 litres. In urban Hungary, where water is relatively expensive, consumption is 80 litres/day.

But how much water does nature need?

GWSP scientists’ best guess at this point is that taking 30 percent to 40 percent of a renewable freshwater resource constitutes “extreme” water stress which could tip an ecosystem into collapse. This can be mitigated if water is returned and recycled in good quality. Mining fossil groundwater resources is by definition non-sustainable.

“We have to be careful that the water security goal is truly sustainable for ecosystems,” Bogardi said.

It is not clear that the Sustainable Development Goal on water will “simultaneously optimise water security for humans as well as for nature”, said Vörösmarty.

“The water sciences community stands ready to take on this challenge. Are the decision makers?” he asked.