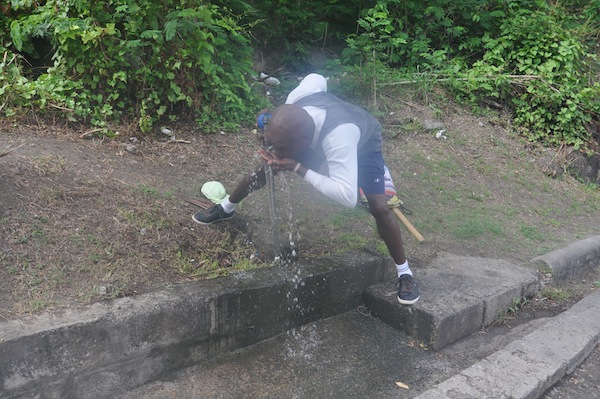 ST. GEORGE'S, Grenada, May 11 2013 (IPS) - One daunting scientific forecast states that almost half of the world’s population will live in areas of water scarcity by 2030. Yet Christopher Husbands, the head of Grenada’s National Water and Sewerage Authority (NAWASA), is unfazed.

“Nationally, we have adequate resources, certainly taking us way past 2030,” he told IPS, adding that for the coming decades Grenada did not need to be overly concerned about the coming water scarcity.

Yet he allowed that two villages in Grenada do not have pipe-borne water. As part of its overall plan to promote best practises in water management, the state-owned utility company will this year construct Grenada’s first community rainwater system in one of them, the hamlet of Blaize village.

Husbands, who is the general manager at NAWASA, estimated that the entire community of 3,000 to 5,000 residents would be supplied with rainwater. “The system will be designed to ensure 60 days’ supply at all times,” he described. “We will have a central system and pipe the water to the houses, so we will control the treatment.”

Residents currently must go to a local spring for water, which is treated by NAWASA. In the dry season, when the spring runs low, the company sends water trucks.

Pat Jones, 65, recalls that when he was growing up, a community standpipe could be found every eighth of a mile. Today, he noted, most people have pipes in their homes. “But there are still a few community standpipes around,” he told IPS.

He called the idea of community standpipes “a very good idea because not all of us can afford the luxury of pipes in our homes. It is a necessity in certain communities so that residents can get water to drink and even take a bath.”

In spite of Grenada’s abundance of surface water, the country has always struggled with distribution. Husbands said that the solution – pumping – is easy, technically, but expensive.

A community rainwater system is not entirely new to Grenada, the largest of three in this three-island state. The smallest, Pitite Martinique, is supplied completely by rainwater, while the other, Carriacou, is 95 percent supplied by rainwater.

Feeling the effects of climate change

For Grenada, the dry season is traditionally from January to June, with different parts of the island feeling varying levels of intensity and over different periods.

“Drier dry seasons and more intense rain events during the rainy season…are extremely problematic for us,” Husbands said. “When the dry season persists, because we are so dependent on surface water, our supplies drop sometimes 40 percent.”

Ironically, more intense periods of rain sometimes result in less water. “You have the dams getting silted up; you have the river muddy and you can’t treat it…because it’s going to end up as mud in people’s homes.”

Climate change funding is also an issue, Husbands told IPS. Despite bigger pledges at climate change conferences, “the rate at which those funds are getting down to the ground needs improving”.

“Storage is key for climate change, because it’s what’s going to allow us to balance these effects,” Husbands described. “But when you are not even getting the funds yet you are easily 12, 24 or 36 months away from implementation.”

But he also noted that Grenada was taking steps to reduce water waste such as by reducing leaks. It even set up a Leak Detection Unit. “They go around the country daily looking for leaks, all in a bid to get that efficiency up and non-revenue water down,” Husbands told IPS.

NAWASA is also on a public education and awareness campaign to teach children about good usage practices and conservation. It is partnering with the ministry of agriculture to ensure catchment areas are protected.

Similarly, the neighbouring island of Dominica, known for its rivers and abundance of fresh water, has been urging residents to review water resource management, as the number of rivers it has may be decreasing, according to Reginald Austrie, minister of housing, lands, settlement and water resources management.

Dominica recently launched a 7.4-million-dollar water upgrade project that authorities said would benefit thousands of residents and consumers in the north, east and south of the country.