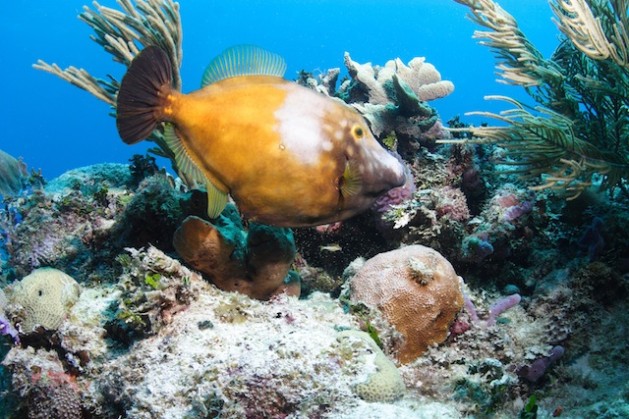 The Great Barrier Reef is home to over 1,500 species of fish. Credit: Mauricio Ramos/IPS

An assessment report of the reef by the United Nations Educational, Scientific and Cultural Organisation (UNESCO) and the International Union for Conservation of Nature (IUCN) has said the lack of “firm and demonstrable commitment” by either the Australian federal or the Queensland state government to limit port developments near the reef “represents a potential danger to the outstanding universal value of the property.”

Spread across an area of 348,000 square kilometres, the Great Barrier Reef includes about 2,500 individual reefs and over 900 islands and is home to breeding colonies of seabirds and marine turtles, snubfin dolphins and the humpback whale.

“Will we sacrifice the Great Barrier Reef and accept dangerous climate change as the inevitable cost of propping up just one industry?” - Greenpeace Senior Campaigner Dr. Georgina Woods
Australia’s resources boom, combined with increasing demand for coal in Asian markets, is attracting billions of dollars worth of investments in mining projects here. About 43 industrial development proposals are under assessment for their potential impact on the world’s most extensive coral reef ecosystem.

“With a number of major development (projects) coming up for approval in the coming weeks and months, the Australian government is playing a risky game if it continues to approve them because it may force the World Heritage committee to place the reef on their list of shame,” World Wildlife Fund (WWF) Spokesman Richard Leck told IPS.

Since 2011, UNESCO and the IUCN have expressed serious concerns about the management of the world heritage area.

“Australia has clearly ignored the recommendations. The federal government continues to approve new developments with no long-term commitment to restricting industrialisation to the existing footprint. The Queensland government has also weakened some of the laws that protect the reef from development and land clearing,” Leck told IPS.

WWF estimates that the clearing of tens of thousands of hectares of vegetation along rivers leading to the reef, and allowing dredge spoil to be dumped in coastal waters will have a significant impact on the protected site, which contains 400 types of coral, 1,500 species of fish, 4,000 types of mollusc, about 240 species of birds, and several sponges, anemones, marine worms and crustaceans.

The reef waters also provide major feeding grounds for threatened species, and hosts one of the world’s largest populations of the dugong.

According to Australian Marine Conservation Society’s Great Barrier Reef Campaign Director Felicity Wishart, “The development of port infrastructure and increased shipping movements require the dredging of millions of tonnes of seabed, often seagrass meadows which are the breeding and feeding areas for turtles, dugongs and other marine life.

“The sediments stirred up during dredging can travel tens of kilometres away, settling on coral ecosystems and plant life. This can damage or destroy vital wetlands, fish breeding grounds and other coastal habitats,” Wishart told IPS.

Moreover, environmentalists are concerned that increased shipping will aggravate the risk of oil spills in the reef. About 4,000 ships plow the Great Barrier Reef annually and this number is expected to grow to 6,000 ships by 2020.

To protect the healthiest and most pristine section of the reef from terrestrial threats, especially new ports and mining development, The Wilderness Society is seeking a World Heritage nomination for the Cape York Peninsula, located on the northern tip of Queensland.

“This would rule out the Balkanu Corporation’s Wongai coalmine proposal, which would open up new areas to development, and Rio Tinto’s South of Embley bauxite mine, which would require 900 shipping movements through the reef between the Weipa mine and the processing facility at Gladstone,” Gavan McFadzean, Wilderness Society’s northern Australia campaigner, told IPS.

According to projections by the Bureau of Resource and Energy Economics, coal exports from Australia, already the world’s leading exporter, will roughly double in a little over a decade. Over the past 10 years black coal exports have increased by more than 50 percent. Major Asian economies like Japan, China, the Republic of Korea, India and Taiwan account for 88 percent of all black coal exports.

Greenpeace Senior Campaigner Dr. Georgina Woods summed up the situation with a simple question: “Will we sacrifice the Great Barrier Reef and accept dangerous climate change as the inevitable cost of propping up just one industry?”

CEO of the Sydney-based Climate Institute, John Connor, warned that the Great Barrier Reef is under threat from climate change, both from ocean acidification and from increasingly severe storms, but said Australia had taken some important steps to reduce emissions by putting in place the necessary carbon laws.

“Australia’s carbon price mechanism regulates emissions by limiting them not just pricing them. It will reduce at least 12 million tonnes of carbon pollution a year and has the potential to reduce 1.1 billion tonnes by 2020,” Connor told IPS.

Prime Minister Julia Gillard’s Labour Government has also announced it will pour 27 million dollars into improving the quality of water flowing into the Great Barrier Reef lagoon. It will help reduce the run-off from farms causing coral bleaching and algae growth, which smothers seagrass beds and coral reefs.

Larissa Waters, senator for the Australian Greens, has introduced a bill in the Senate to adopt the World Heritage committee’s key recommendations and she is calling on both the Liberal and the Labour Party to support it.

“The government must stop putting the interests of big mining companies ahead of the reef and place a moratorium on all further developments until the joint government strategic assessment is finished in 2015 and also stop allowing new ports in pristine areas,” Waters told IPS.

Experts are worried about the economic impact of destruction to the reef, which contributes 822 million dollars a year to the national economy and supports about 60,000 jobs. Recent polling shows that 91 percent of Australians think protecting the reef is the most important environmental issue in 2013.