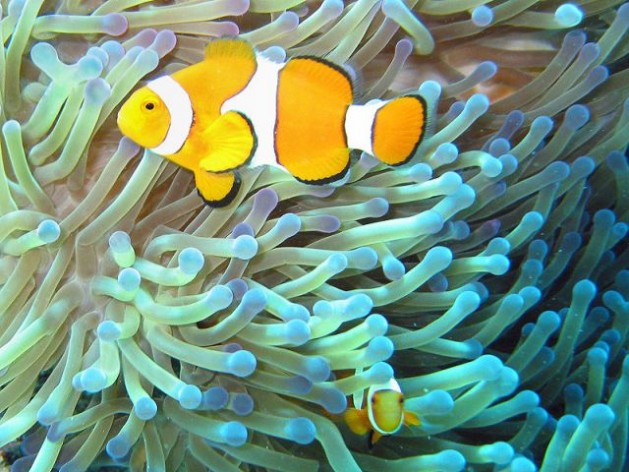 The common clownfish at home on the Great Barrier Reef, Australia. More than 50 percent of the coral in the 2,300 km long reef has died over the past 27 years. Credit: Jan Derk/public domain

MONTEREY, California, U.S., Oct 1 2012 (IPS) - Australia’s iconic Great Barrier Reef is dying, and little will be left less than 10 years. More than half of the coral in the 2,300 km long reef has died over the past 27 years, according to a scientific survey released Monday.

Unless Australians act with urgency, only five to 10 percent of the 3,000 individual coral reefs off the eastern coast of Australia will remain, according to the study published in the Proceedings of the National Academy of Sciences.

“We are losing an entire ecosystem in the best-managed coral reef system in the world,” said Katharina Fabricius of the Australian Institute of Marine Science (AIMS), and study co-author.

“This is the first thorough analysis of all the survey data on the GBR (Great Barrier Reef),” Fabricius told IPS.

“I can’t believe it…that is really shocking,” said Graeme Kelleher, first chair and CEO of the Great Barrier Reef Marine Park Authority, which has protected and managed most of the reef since 1975.

“If the people at AIMS (Australian Institute of Marine Science) did it, then it must be real,” Kelleher said when IPS showed him an embargoed copy of the study.

There have been previous warnings that Australia was losing one of the world’s seven natural wonders — and its six-billion-dollar-a-year tourist attraction. This year UNESCO announced it might downgrade the reef’s prestigious designation as a World Heritage Site to a “World Heritage Site in Danger”.

Powerful cyclones like Cyclone Yasi in 2011 have damaged the reef with powerful waves. A bigger impact, however, is the torrential rainfall on land that results in big floods that wash enormous amounts of fertilisers, pesticides, animal waste and sediments off the land onto the reef. That run-off affects the reef directly and also creates perfect conditions for outbreaks of coral-eating crown of thorns starfish.

Storms and subsequent runoff directly account for 48 percent of the coral deaths. Crown of thorns starfish are responsible for 42 percent, with bleaching from too warm waters accounting for 10 percent, according the intensive survey of 214 of the 3,000 reefs in the GBR. Only three of the reefs surveyed were unaffected.

“A single crown of thorns starfish can lay 60 million eggs and their larvae thrive on the plankton blooms that result from high levels of nutrients coming off the land,” said Fabricius.

Those nutrients are largely from agricultural sources – sugar cane and grazing mainly, she said. Most of the GBR is found off the coast of the state of Queensland, which is Australia’s largest agricultural region.

Crown of thorns starfish are a native species whose numbers have exploded over the last 20 years. There is no known way to effectively control them. Divers do go into the water and kill them individually but it is impossible to keep up.

“We can’t stop the storms but, perhaps we can stop the starfish. If we can, then the reef will have more opportunity to adapt to the challenges of rising sea temperatures and ocean acidification,” said John Gunn, CEO of AIMS.

The AIMS research likely will be attacked in Australia even though it is based on the most comprehensive reef monitoring programme in the world.

“Our researchers have spent more than 2,700 days at sea and we’ve invested in the order of 50 million dollars in this monitoring programme,” said Peter Doherty, research fellow at AIMS.

Newly-elected Queensland Premier Campbell Newman has ignored UNESCO’s concerns about the GBR and his government, including the minister of the environment, have expressed doubt that humans are influencing climate change.

IPS previously reported that the Newman government intends to aggressively expand coal mining and the export industry and has approved extensive dredging for coal port expansion and new coal ports. Right now some 1,700 bulk freighters carrying coal navigate through or around the Great Barrier Reef, and that number will jump to 10,000 in 2020 by some estimates.

There already have been accidents. In 2010, the coal ship “Shen Neng” took a short cut and ran aground on the reef, leaving a three km scar, an oil spill and trail of toxins from its anti-fouling paint.

In central Queensland four LNG processing plants with port facilities have been proposed. Extensive dredging is already underway in the port of Gladstone and Australia’s minister of the environment has approved the ocean dumping of millions of tonnes of dredged material inside the Great Barrier Reef Marine Park boundaries.

The GBR can recover if it is properly protected but recovery will take 10 to 20 years, said Hugh Sweatman, a co-author of the AIMS study.

Whether the reef gets the breathing space it needs to recover from multiple assaults and be protected from future impacts is entirely up to Australians.