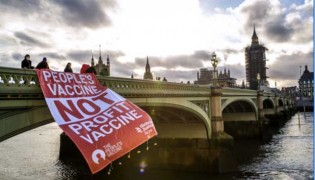 The Global Assault on Human Rights

By Ben Phillips
Human rights are under global assault. In 2021, the escalation of the worldwide siege on human rights included clampdowns on civil society organisations, attacks on minorities, the undermining of democratic institutions, and violence against journalists.

Covid is a Great Unequaliser, But the Crisis Could Enable us to Build a More Equal Future

By Ben Phillips
Any of the first names that the media reported as having Covid were those of the rich and powerful, from movie stars to political leaders. Be ye ever so high, the virus is above thee – or so it seemed.

By Ben Phillips
Last month 195 world leaders once again met in New York for big speeches and grand events. But on inequality, when all is said and done, more has been said than done.

By Ben Phillips
As the elite in the world of finance gather in the Swiss luxury town of Davos, rallies are taking place around the world as citizens demand for solutions to rising inequality. At the same time as the World Economic Forum’s rich and powerful hold forth about fixing the crisis of inequality they created, a new movement called the Fight Inequality Alliance is telling another story that is growing around the world.

Fighting Xenophobia & Inequality Together in the Age of Trump

By Ben Phillips
As the world marks 100 days of the Trump Presidency, we can see that we are now in a new era of crisis, that it goes well beyond one man and one country, and that only a profound and international response can get us out of the state we are in.
ADVERTISEMENT ADVERTISEMENT