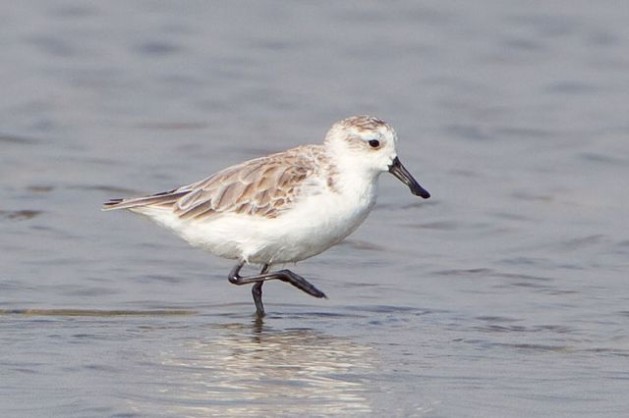 The spoon-billed sandpiper (Eurynorhynchus pygmeus), seen here in Phetchaburi, Thailand, could be extinct within a decade. Credit: J.J. Harrison/cc by 3.0

UNITED NATIONS, May 17 2013 (IPS) - Migratory birds, which play an important role in the complex web of life known as ecosystem services, are under threat as never before, with some species facing extinction within the next decade.

Ahead of the International Day for Biological Diversity on May 22, focused this year on water resources, experts are calling for greater international cooperation to find sustainable and cost-effective solutions to the problem of species loss and environmental degradation.

"Half of the world’s wetlands - natural water storage systems - have been lost over the past century." -- Nick Nuttall of UNEP

According to Francisco Rilla, information and capacity building officer at the Convention on Migratory Species (CMS), an intergovernmental treaty signed in 1979 in Bonn, Germany, “The ‘Big Five’ primary causes of biodiversity loss … are habitat destruction, overharvesting and poaching, pollution, climate change and introduction of invasive species.”

Migratory species are especially vulnerable “as they depend entirely on a network of well-functioning ecosystems to refuel, reproduce and survive in every ‘station’ they visit and upon unrestricted travel,” Rilla told IPS.

The U.N. Environment Programme (UNEP) notes that many migrating birds, such as cranes, storks, shorebirds and eagles, travel thousands of kilometres across flyways that span countries, continents and even the entire globe.

These birds use wetlands to rest, feed and breed along their migration routes.

However, “half of the world’s wetlands – natural water storage systems – have been lost over the past century,” Nick Nuttall, UNEP spokesperson, told IPS.

Because of the degradation of their habitats, some migratory bird species could lose up to nine percent of their populations, while others, like the spoon-billed sandpiper, could become extinct within a decade, leading to further ecosystem changes and ultimately impacting on human development.

Putting a price on biodiversity loss

In a statement ahead of World Migratory Bird Day on May 11-12, UNEP executive director Achim Steiner underlined that migratory birds “are part of the web of life that underpins nature’s multi-trillion-dollar ecosystem services,” which are the benefits and resources that nature offers to humankind.

In March 2007, at the request of the Group of Eight largest economies along with several developing countries, UNEP started an initiative called ‘The Economics of Ecosystems and Biodiversity’ (TEEB), aiming at studying the economic benefits of biodiversity and incorporating them into policy-making.

As an example of TEEB’s implementation, Nuttall explained how UNEP assisted Kenya in 2012 to calculate the economic value of the ecosystem services generated by the Mau forest northwest of the capital Nairobi.

The overall value was assessed at 1.5 billion dollars a year, a consideration that led to the restoration of the forest, as well as of other ecosystems supplying water to Kenyan cities.

The advantages of using natural infrastructure like forests and wetlands instead of human-built infrastructure, such as dams, pipelines, water treatment plants and drainage systems, are highlighted in CBD’s report.

Agricultural activities, which alone account for approximately 70 percent of global water use, could apply a similar approach.

“More sustainable forms of farming can … address water issues while enhancing biodiversity,” Nuttall told IPS. “A survey of thousands of small scale farmers in Africa by UNEP and the U.N. Conference on Trade and Development found that those who had switched to organic or near organic production had seen yields on average climb by 100 percent, in part because returning organic matter to the soils had increased water retention of the soil – like a sponge – and prolonged the growing season.”

“We live in an increasingly water-insecure world,” stresses the CBD report.

Although there is no global water scarcity as such, there is an imbalance in its regional distribution, with only 12 percent of the world’s population consuming 85 percent of the available water.

Sound governance and equity in the distribution of water-derived benefits seem therefore important questions in the debate.

Asked by IPS about sustainable water management strategies in South Asia, one of the most water-scarce regions of the world, Michael Kugelman, senior programme associate for South and Southeast Asia at the Woodrow Wilson International Center for Scholars, cited resource mismanagement as a root cause of problems.

He stressed the lack of interregional cooperation in the area, as well as of understanding of the connections between ecosystem protection and water resources.

“I think that at a government level that linkage is not made at all,” he said, “There are a lot of environmental NGOs that are bringing attention to these issues. … In some ways governments will take the lead from the NGO community.”

Water cooperation in South Asia is limited to some bilateral initiatives, such as the Indus Water Treaty between India and Pakistan.

At a global level, the main mechanisms dealing with biodiversity and water management are the Ramsar Convention on Wetlands (signed in 1971 in Ramsar, Iran) and the above-mentioned CBD, which was created at the 1992 Earth Summit in Rio de Janeiro, Brazil, and in 2010 adopted its Strategic Plan for Biodiversity for the period 2011-2020.

The United Nations declared 2013 the International Year of Water Cooperation.