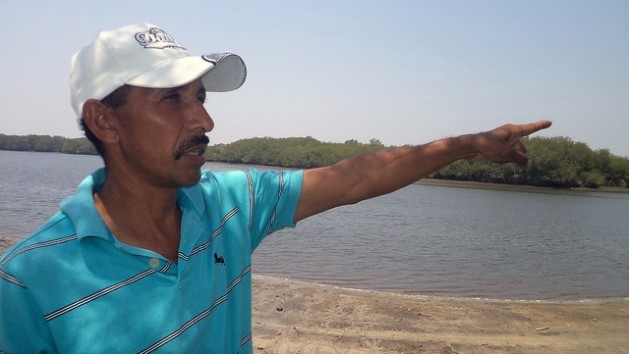 Mauricio Cruz points to an area where he says tourism infrastructure will be built, in Cuche del Monte on the edge of the mangrove forest on Jiquilisco Bay. Credit: Edgardo Ayala/IPS

JIQUILISCO, El Salvador , Apr 29 2013 (IPS) - Community leaders in El Salvador are opposed to the government’s plans to use U.S. aid funds to develop the country’s Pacific coastline, on the grounds that it would threaten the environment in a vast area.

“The natural areas we have protected for so long will be seriously affected if tourism investments are made in these coastal zones,” as the government intends, within the framework of the United States Millennium Challenge Fund (FOMILENIO) programme, activist Amílcar Cruz García, secretary of the Asociación Mangle (Mangrove Association), a community organisation in the Lower Lempa area in the southeastern department or province of Usulután, told IPS.

The first FOMILENIO programme in El Salvador was rolled out in 2007-2012, injecting 460 million dollars in investment in the northern region of the country.

The MCC was created in 2004 by the U.S. Congress to help poor countries overcome poverty. Since then it has devoted 8.4 billion dollars in aid worldwide, according to its web page.

“We are in favour of the good things that FOMILENIO could bring, such as schools, roads and health clinics, but we are worried about private tourism investment,” said Cruz García.

The Asociación Mangle and other NGOs have been working in the area known as the Lower Lempa ever since these lands in the south of Usulután were distributed to former army soldiers and former guerrillas demobilised after a peace agreement put an end to the country’s bloody 12-year civil war in 1992.

The parcelled out farm land borders on the nature reserve of Jiquilisco Bay, where these organisations have carried out major environmental and social projects.

Jiquilisco Bay and the Jaltepeque estuary together form the most important ecological corridor in the country, with an area of over 112,000 hectares.

Because of the fragility of the ecosystem and its status as a nesting area for endangered species, the bay was declared a protected site by the Convention on Wetlands of International Importance Especially as Waterfowl Habitat (Ramsar Convention) in October 2005, and the estuary was similarly protected in February 2011.

Some 300 female hawksbill turtles (Eretmochelys imbricata) continue to nest on the beaches of the Pacific coast between Mexico and Peru, and half of them lay their eggs on the 37 kilometres of beach in Jiquilisco Bay, according to studies by the Eastern Pacific Hawksbill Initiative and the Southwest Fisheries Science Centre, abranch of the U.S. National Oceanic and Atmospheric Administration.

Jiquilisco Bay was declared a biosphere reserve by the United Nations Educational, Scientific and Cultural Organisation (UNESCO) in 2007.

However, the declaration of protected status still allows for fishing and the harvesting of marine products in the area, as well as the construction of infrastructure, in line with local zoning regulations, said Álvaro Moisés, the head of Salvanatura, a conservation organisation.

This could be the legal loophole that tourism investments could take advantage of.

Under FOMILENIO II, the leftwing government of President Mauricio Funes aims at increasing education and training for young people in the area so that they can take up jobs created by private investors, while basic infrastructure like roads, piped water and electricity is put in.

But “frankly, we see this as a threat,” said Mauricio Cruz, the president of the Sara y Ana aquaculture cooperative, in the small town of Salinas El Potrero in the municipality of Jiquilisco.

The community leader told IPS that the members of seven local cooperatives fear that tourism projects will pollute the estuary, whose waters fill their shrimp farming tanks.

“We are very well organised and we won’t let a huge hotel be built next to our tanks,” he said.

So far, the government has received 62 proposals from investors, pending MCC approval, for a total of 450 million dollars.

Interest has been expressed, for example, by the Association of Coastal Marine Tourism Developers (PROMAR). Their proposals total 208 million dollars, including luxury hotels and even a regional airport in the nearby province of La Unión.

The head of PROMAR, Marco Guirola, told IPS that it is understandable that there is mistrust among the people living in the coastal communities, because they have historically been marginalised.

But the former approach of doing business in ways that violate the environment and the rights of local residents “is no longer sustainable, or even possible, even if one wanted to, because the level of organisation in the area is enough to exert the necessary pressure,” Guirola said. He added that it is possible to reconcile large tourism investments even with areas as fragile as a nature reserve.

“We should give up opposing (investments) just for fun,” he said.

For his part, Tourism Minister José Napoleón Duarte told IPS that he would not back any tourist project that did not meet minimum environmental requirements.

But a third party should audit the investments, experts say. Salvanatura’s Moisés regretted that neither the government nor the MCC have explicitly established that investment projects should be certified by external institutions.

These external assessments, Moisés said, are much more thorough than the environmental impact studies required by Salvadoran law, and would enable projects to be evaluated comprehensively in environmental and social terms, according to international standards.

“The FOMILENIO project should be an opportunity for El Salvador, which is one of the countries in the region most vulnerable to extreme meteorological events, to adapt to the impacts already being caused by climate change,” the activist said.

The Lower Lempa is particularly susceptible to these effects, suffering from floods during the rainy season that cost many lives and cause heavy damages to crops and infrastructure.

“What guarantees that investments will respect the environment and the social fabric of the area is not the government nor the business sector, but people organising themselves,” Emilio Espín, a manager at the Association for Cooperation and Community Development (CORDES), an NGO with 25 years’ standing in the area, told IPS.