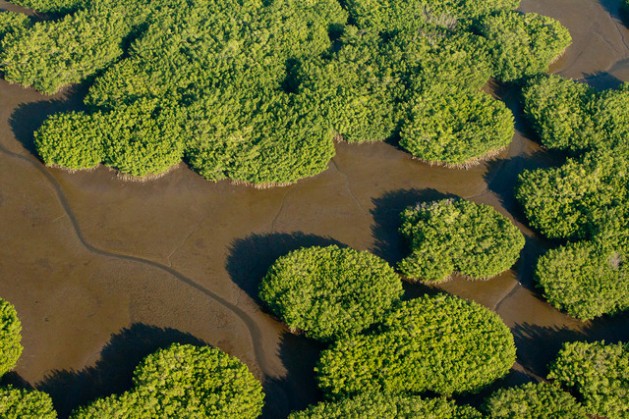 Mangroves in the Marismas Nacionales Biosphere Reserve, which has the most extensive mangrove forest system along Mexico’s Pacific coast, could be lost if the Las Cruces hydroelectric dam is built, warn environmentalists and local residents. Credit: Courtesy of WWF

MEXICO CITY, Jun 5 2014 (IPS) - The Las Cruces hydroelectric project in the northwestern state of Nayarit is one of the threats to biodiversity in Mexico, according to activists.

“It will have an impact on the Marismas Nacionales wetlands reserve, because the dam will retain 90 percent of the sediment which is necessary for the survival of the ecosystem,” said Heidy Orozco, executive director of the non-governmental organisation Nuiwari.

Besides, “the hydrological regime would be modified and the low-lying jungle would be flooded,” she told IPS.

Nuiwari, which forms part of the Free San Pedro River Movement, has been dedicated since 2006 to protecting the San Pedro river basin, where the dam would be built.

The Federal Electricity Commission plans to build and operate the hydropower plant 65 km north of the city of Tepic, in Nayarit. It will have an installed capacity of 240 MW and a 188-metre high dam, with a reservoir covering 5,349 hectares.

The environmental impact study for the dam acknowledges that subsistence-level farming and small-scale livestock production will be replaced by fishing activities in the reservoir.

The Marismas Nacionales Biosphere Reserve, the most extensive mangrove forest system along Mexico’s Pacific coast, is the year-round habitat for 20,000 water birds and is a winter home to more than 100,000 migratory birds.

The reserve is recognised as a Wetlands of International Importance under the Ramsar Convention.

In the Marismas – which means marsh – Reserve more than 300 species of animals have been reported, 60 of which are endangered or threatened, especially due to overuse and destruction of habitat, and 51 of which are endemic, according to the Ramsar Convention, in effect since 1975.

Fishing activity that depends on the wetland ecosystem generates between 6.5 and 13.5 million dollars a year for local communities, according to official figures.

Furthermore, the dam would destroy 14 sacred sites and ceremonial centres of the
Náyeri or Cora, Wixárica or Huichol, Tepehuano and Mexicanero indigenous communities.

Protection of biodiversity and the distribution of benefits are the core focuses of the Nagoya Protocol on Access to Genetic Resources and the Fair and Equitable Sharing of Benefits Arising from their Utilisation, signed in Nagoya, Japan in 2010.

The protocol, which complements the Convention on Biological Diversity, in force since 1993, stipulates that every signatory must adopt measures to ensure access to traditional knowledge associated with genetic resources and held by indigenous and local communities.

The protocol establishes that such knowledge must be “accessed in accordance with prior informed consent” and under “mutually agreed terms”.

“Parties shall in accordance with domestic law take into consideration indigenous and local communities’ customary laws, community protocols and procedures, as applicable, with respect to traditional knowledge associated with genetic resources,” the protocol adds.

Pedro Álvarez-Icaza, general coordinator of Biological Corridors and Resources in the government’s National Commission for the Knowledge and Use of Biodiversity (CONABIO), described the difficulties in complying with these stipulations.

“The big problem is how the benefits are to be distributed,” he told IPS. “Who do they go to – the community? The person providing the information? A group of people? I’m also worried about false expectations – about the idea that a plant could give rise to a medicine, and people spend 10 years waiting for that to happen.”

The government official also said “the legal framework is not necessarily the most up-to-date. The key is to strengthen the capacity of local and indigenous communities and raise their awareness of their right to the fair distribution of benefits.

“The important thing is information, so that if a country wants to patent a resource, it has to demonstrate that the information was obtained through a benefit-sharing agreement, with prior, informed consent,” he said.

With financing from Germany’s technical cooperation agency, GTZ, CONABIO is carrying out the project “Governance on Biodiversity: Fair and Equitable Benefit-Sharing Arising from the Use and Management of Biological Diversity”, to establish a group of pilot cases to serve as reference points.

The initiative, which has a budget of six million euros (8.2 million dollars), is to run though 2018.

“As long as the autonomy of indigenous peoples is not recognised and traditional knowledge is not valued, it is a mere expression of good intentions. There will be no fair and equitable distribution of benefits,” independent consultant Patricia Arendar told IPS.

Mexico is one of the 12 most biologically diverse countries in the world. The country has identified 2,692 species of fish, 361 amphibians, 804 reptiles, 1,096 birds, 535 mammals and over 25,000 plants, according to CONABIO statistics.

The Commission also indicates that there are 127 officially extinct species, 475 endangered, 896 threatened and 1,185 species subject to special protection in Mexico.

The Sectoral Programme of Environment and Natural Resources 2013-2018 indicates that natural ecosystems have been lost in nearly 29 percent of Mexican territory while the ecosystems in the remaining 71 percent are surviving with different levels of conservation.

Natural capital is one of the issues on the agenda of the Jun. 6-8 Second World Summit of Legislators of GLOBE International (the Global Legislators Organisation) in Mexico City, which will draw nearly 500 parliamentarians from more than 80 nations.

With financing from the Global Environment Facility (GEF), Mexico’s environment ministry is leading the analysis of options for adapting the country’s legal framework to the Nagoya Protocol. The alternatives are modifying the law on wildlife, passed in 2000, or creating a specific new law.

So far, 92 countries have signed the Nagoya Protocol. But only 36 of the 50 needed for it to enter into force have ratified it. The only Latin American countries to have done so are Honduras, Mexico and Panama.

“Without a state policy for the protection of biodiversity, it is very difficult to develop strategies around the Nagoya Protocol, for example,” Arendar said. “It’s not a priority in today’s politics. There are more natural land and marine areas, and greater knowledge about biodiversity, but we’re still losing biodiversity.”

“The dam shouldn’t be built,” argued Orozco. “It is unacceptable from any point of view; the few benefits don’t justify the terrible permanent impacts. We demand that Mexico live up to international environment and human rights treaties, but experience from other cases indicates to us that this doesn’t always happen.”