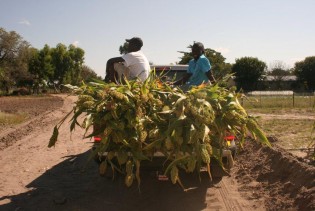 By Kanya D'Almeida
How much does a forest cost? What’s the true economic value of an ocean? Can you pay for an alpine forest or a glacial meadow? And – more importantly – will such calculus save the planet, or subordinate a rapidly collapsing natural world to market forces?

By Miriam Gathigah
Developing countries in Africa, Asia and Latin America are increasingly leading the way in providing a legal framework for climate security and are being hailed for their continued advancement in formulating climate change laws and policies.

By Miriam Gathigah
Daniel Njau, a small-scale farmer from Nyeri County, central Kenya, is torn. He just may have to give up his six-hectare tea plantation in favour of farming climate-resilient food crops.

By Ignatius Banda
Despite a raft of legislation dealing with the environment, African countries are still falling short when it comes to enforcing the legal instruments that respond to challenges posed by climate change, researchers say.

By IPS Correspondents
The global canon of climate legislation has undergone significant changes over the last four decades. These changes in recent years have included a growing body of signature laws and initiatives spearheaded by countries in the global South, many of which are disproportionally affected by decades of uncurbed global environmental degradation and greenhouse gas emissions.

By Diego Arguedas Ortiz
Eight months after it was introduced in the Costa Rican legislature, a bill to create a framework law on climate change is faltering after undergoing modifications that have run into criticism from environmentalists and experts – a situation made even more complex by the recent change of government.
Next Page »
ADVERTISEMENT ADVERTISEMENT