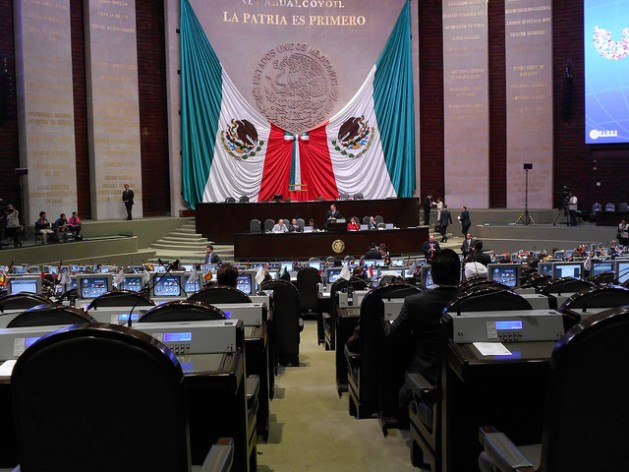 A Jun. 7 session of the second GLOBE Summit of World Legislators in the Mexican Congress. Nearly 500 legislators from some 90 countries took part in the gathering in Mexico City. Credit: Emilio Godoy/IPS

MEXICO CITY, Jun 9 2014 (IPS) - Latin America’s parliaments have failed to protect the forests and to guarantee their sustainable use, despite the fact that a number of countries have laws on forests, legislators from the region said at a global summit in the Mexican capital.

There are problems in areas such as respect for the rights of local communities, budget allocations for the protection of forests, land tenure guarantees, forest floor carbon ownership, and the fair and equitable sharing of benefits arising from sustainable use of forests.

“We aren’t working with the communities, and we don’t have the technical capacity to include international standards; the government is fearful and more worried about bringing in forest investment in activities like mining, without any responsibility for the environment,” Colombian Senator Mauricio Ospina of the left-wing Alternative Democratic Pole told IPS.

Ospina was one of the nearly 500 legislators from more than 90 countries who took part in the Jun. 6-8 second GLOBE Summit of World Legislators in Mexico City, organised by the Global Legislators Organisation (GLOBE International).

The summit agenda focused on the struggle against climate change and efforts to protect forests and natural capital.

Colombia, which has 60 million hectares of forest, is one of the 18 nations of the developing South taking part in the United Nations Collaborative Programme on Reducing Emissions from Deforestation and Forest Degradation in Developing Countries (U.N. REDD), which was launched in 2007.

U.N. REDD is an effort to create a financial value for the carbon stored in forests, offering incentives for developing countries to reduce emissions from forested lands and invest in low-carbon paths to sustainable development. It finances national programmes to fight deforestation, reduce carbon emissions and foment access by participating countries to technical and financial support to combat climate change.

The aim goes beyond deforestation and forest degradation, and includes the role of conservation, sustainable management of forests and enhancement of forest carbon stocks.

Preventing deforestation is essential because trees capture carbon dioxide from the atmosphere and turn it into carbon in their trunks and branches and in the soil. When forests are cut down, not only do they stop absorbing carbon, but also the carbon stored in the trees is released into the atmosphere as CO2. Moreover, forests are critical to rainfall and play a key role in the water cycle through evaporation and precipitation.

In June 2013, U.N. REDD approved an allocation to Colombia of four million dollars for activities such as the creation of a forest inventory, the development of social and environmental safeguards, and the identification of benefits.

Colombia is carrying out 10 U.N. REDD projects and another 23 forest initiatives. Since 2008, the Forest Carbon Partnership Facility (FCPF) has approved an additional 3.6 million dollars in funds for the country.

The REDD+ action plan for Reducing Emissions from Deforestation and Forest Degradation is a platform of the U.N. Framework Convention on Climate Change that incorporates elements like conservation and enhancement of forest carbon stocks and the sustainable management of forests.

Peru is also moving forward in the design of a REDD+ strategy, facing challenges similar to those of the rest of the region.

“We have to work in the communities, providing them with tools,” Congresswoman Marisol Espinoza, of the governing Peruvian Nationalist Party, told IPS. “Those who take care of the forests are their guardians and should be paid for what they do. We hope the new laws will strengthen this new approach to preserving forests.”

Peru is developing a national REDD+ strategy that has a handicap: it has no mechanism to resolve disputes over land property rights, according to the article “REDD+ Readiness progress across countries: time for reconsideration” published in May in the British journal Climate Policy.

There are currently 19 REDD+ projects and another 18 forest initiatives in that Andean nation, which is set to receive 3.8 million dollars from the FCPF.

The 20 authors of the study published in the Climate Policy journal, who assessed the cases of Peru, Indonesia, Vietnam and Cameroon, found that progress had been made in planning, coordination, demonstration and pilots.

They suggested a “rethink of the current REDD+ Readiness infrastructure given the serious gaps observed in addressing drivers of deforestation and forest degradation, linking REDD+ to broader national strategies and systematic capacity building.”

Mexico, which is moving forward in fits and starts in its national REDD+ strategy, has some 65 million hectares covered by trees in the territories of around 2,300 communities, according to the Mexican Civil Council for Sustainable Forestry (CCMSS).

“There are still important steps to take to create a legal framework that would provide a sound coherent foundation for the successful application of REDD+,” Mexican lawmaker Lourdes López, cochair of the Globe International forestry initiative, told IPS. “The priority is to support sustainable forest producers and grant facilities to small producers.”

She also wants to regulate businesses like carpentries and furniture stores, to ensure that the lumber they use was legally obtained.

There are 11 REDD+ projects and another 38 forest initiatives in Mexico. In March, the FCPF and the government signed an agreement for 3.8 million dollars to complete the process of consultation and preparation of the REDD+ national strategy.

The government is about to open up the consultation process in order for the strategy to begin to be implemented next year.

The declaration of the second GLOBE Summit of World Legislators, to which IPS had access before it was released, only alludes indirectly to the forestry issue, by emphasising the approval of robust laws that support sustainable development, including forests and REDD+.

The parliamentarians urged governments and the U.N. to press international financial institutions for environmental programmes like REDD+ to involve national legislators, in order to “develop capacities and share best legislative practices.”

In response to a question from IPS, Rachel Kyte, World Bank Group vice president and special envoy for climate change, predicted significant changes in international financial institutions and the nations with the greatest forest capital with respect to the increase in REDD+, at the U.N. General Assembly in September.

Kyte said that since December “we have more than 300 million dollars” to support forest projects.

In Espinoza’s view, it is essential that forest protection schemes do not reproduce poverty.

One country that the rest of the region looks to is Costa Rica, a world pioneer in setting the goal of reaching carbon neutrality in 2021. According to official estimates, the Central American nation will emit close to 21 million tonnes of carbon in 2021, and it hopes to compensate for 75 percent of this total by carbon capture in its forests, which cover 52 percent of the national territory.