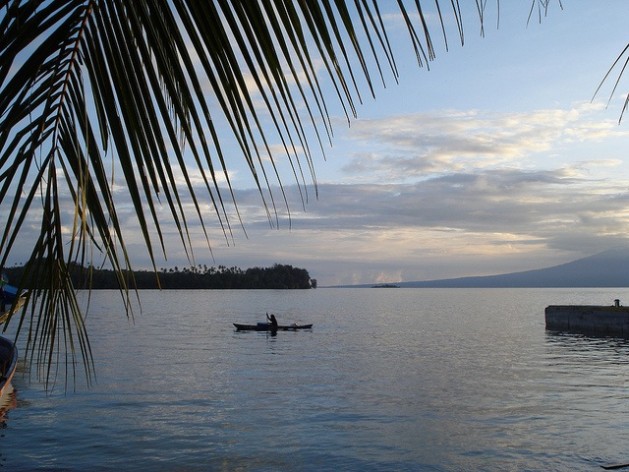 The sea level near the Federated States of Micronesia is rising by 10 millimetres per year, more than three times the global average. Credit: Catherine Wilson/IPS

In December last year the government passed the Climate Change Act, making it compulsory for state sectors, including those responsible for the environment, disaster management, transportation, infrastructure, health, education and finance, to mainstream climate adaptation in all policies and action plans. The president is also required to report to congress annually on the Act’s implementation.

“The legislation is a first in a Pacific Island country and a small island state, so we broke new ground,” Lam Dang, legislative counsel to the Micronesian congress, told IPS.

"One alternative for a small island country to the deadlock in international climate change negotiation [is] to pass our own domestic legislation." -- Lam Dang, legislative counsel to the Micronesian congress
The legislation acknowledges the profound challenge that extreme climate hazards pose to human security and economic health. It reinforces, too, the rationale that action on climate change will only have an enduring effect if enforced.

When high tides flood coastal areas or a typhoon descends on the Pacific Island state, local – and often low-income – communities suffer the most. Thus their experiences and input were crucial to the development of the new policy, said Dang.

“The main concern at the community level is sea-level rise with the resulting loss of agricultural capacity and pollution of drinking water,” Dang said.

Most of Micronesia’s population of 104,000 live in close proximity to coastlines and are engaged in subsistence fishing, as well as farming of crops like taro, banana and yam. The average subsistence household income is close to 11,000 dollars per year.

But the sea level near the island state is rising by 10 millimetres per year, more than three times the global average, leading to more aggressive ‘king tides’ and coastal erosion. Flooding has damaged villages and infrastructure and contaminated arable land and fresh groundwater supplies, affecting thousands of people. As a result, food and water insecurity is a consistent challenge for communities and the government.

The country is already vulnerable to natural disasters and endures an annual typhoon season from July to November.

Suzie Yoma, executive director of the Micronesia Red Cross Society in Pohnpei, recalled the devastation wrought by Typhoon Chata’an in 2002 when a landslide triggered by excessive rainfall tragically buried 47 people in Chuuk state. In 2004 Typhoon Sudal damaged 90 percent of homes and infrastructure on Yap Island and affected more than 6,000 people.

Small islands on the global stage

The groundbreaking reform was informed by FSM’s participation in international meetings of the Global Legislators Organisation, otherwise known as GLOBE International, whose objective is to support national lawmakers in developing legislation that promotes sustainable development.

At a time when the international community seems unable to reach consensus on a carbon emissions peak – which scientists have warned is essential to prevent a global temperature increase of two degrees Celsius – Small Island Developing States like Micronesia struggle to be heard at the global level, compared to industrialised super-powers, such as the United States, Russia and China.

Talks at the GLOBE summit in Rio de Janeiro, Brazil, in 2012, followed by the conference on climate change adaptation in Beijing in 2013, were clear calls to action.

“It became clear after discussions with the large number of gathered legislators from around the world that one alternative for a small island country to the deadlock in international climate change negotiation was to pass our own domestic legislation,” Dang explained.

By demonstrating action with clear accountability at the national level, developing nations hope to galvanise movement towards a binding international climate change agreement that includes high carbon emitting industrialised nations. Currently, the Pacific Islands as a region produces some 0.006 percent of greenhouse gases, yet the people here are bearing the brunt of melting ice and rising seas.

The potential of global warming to increase the frequency and severity of natural disasters and their impact on human settlements, livelihoods and economic infrastructure prompted the government of Micronesia to integrate disaster risk management into its climate law.

Over the past 60 years natural disasters have affected 9.2 million people in the Pacific Islands region, incurring damage costs of 3.2 billion dollars.

Micronesia’s policy is aligned with a broader regional Pacific Islands strategy to incorporate climate change and disaster risk management into policies and legislation. Regional development organisations such as the Secretariat of the Pacific Community (SPC) and the Secretariat of the Pacific Regional Environment Programme (SPREP) have supported this approach since 2008.

Andrew Yatilman, director of FSM’s office of environment and emergency management, said the integrated policy would strengthen the operation of his division.

“Activities [related to disaster risk and climate change] tend to be carried out by staff separately, with climate change generally viewed more as an environmental issue,” he said. “We are now in the process of realigning our programme to make the two more complimentary.”

Benefits include reducing the duplication of tasks and more effectively utilising limited funding and resources.

President Emmanuel Mori has called the Climate Change Act “essential [for] protecting our nation and furthering the interests and wellbeing of our people.”

The country’s leadership will play a critical role in making that objective a reality.

“We can pass the best law but it is up to the executive branch to implement it,” Dang emphasised. “If there is enough political will, the legislation itself is very flexible and allows for continual input.”

At the 19th Conference of the Parties to the U.N. Framework Convention on Climate Change (UNFCCC) held in Warsaw, Poland, in November 2013, Micronesia was a key supporter of a proposal to reduce the use of hydrofluorocarbons (HFCs) through the Montreal Protocol, the international treaty that aims to gradually eradicate substances that contribute to ozone depletion.

HFCs, manufactured gases commonly used in refrigeration and air conditioning, are believed to be highly detrimental to the atmosphere and their use is increasing by 10 to 15 percent per year.

According to GLOBE International, worldwide legislative action to date will not limit the global average temperature rise to two degrees Celsius, widely accepted by the international scientific community as the global warming safety threshold.

Micronesian leaders would like their commitment to inspire a global sense of responsibility for the future environmental fate of all nations and their peoples.