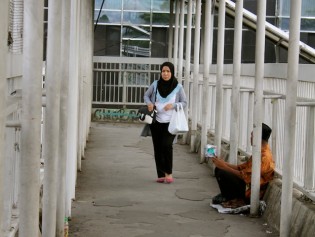 By Sandra Siagian and Rebecca Lake
Standing in front of the two-metre concrete wall, barbed wire and corrugated iron fence that surrounds his mosque, Muhammad Iqbal says he feels like a second-class citizen in his own country.

By Sandra Siagian
While athletes around the world enter their final stages of training for the 30th Olympic Games in London this July, Saudi Arabia stands alone as the only country that has banned females from participating.

By Sandra Siagian
A new book on the influential New York Times columnist Thomas Friedman sets out to debunk his hawkish, neoliberal views, accusing him of overt racism, factual errors and skewed judgments on issues ranging from the U.S. invasion of Iraq to the Israeli-Palestinian conflict.

By Sandra Siagian
It happens every day across the globe, with many of its young victims lured by false promises into the world's third most profitable criminal activity. This is human trafficking.

By Sandra Siagian
Since it launched in 1997, the United Nations Trust Fund to End Violence Against Women has distributed more than 78 million dollars to 339 projects around the world, but even these resources fall far short, meeting less than five percent of demand.

By Sandra Siagian
On the International Day for the Elimination of Violence Against Women on Nov. 25, a group of feminist organisations will unite to launch a campaign calling for an end of the "immoral and unethical economy of Wall Street" against women and people of colour.

By Sandra Siagian
Deliberations are underway for a United States-backed proposal to allow the continued use, production, trade and stockpiling of cluster munitions at the Fourth Review Conference of the Convention on Conventional Weapons (CCW) in Geneva.

By Sandra Siagian
More than 5,000 Haitian cholera victims are seeking compensation, action and an apology from the U.N. and the United Nations Stabilisation Mission in Haiti (MINUSTAH) for the ongoing epidemic that has killed more than 6,600 Haitians and sickened more than 476,000 since October 2010.
ADVERTISEMENT ADVERTISEMENT