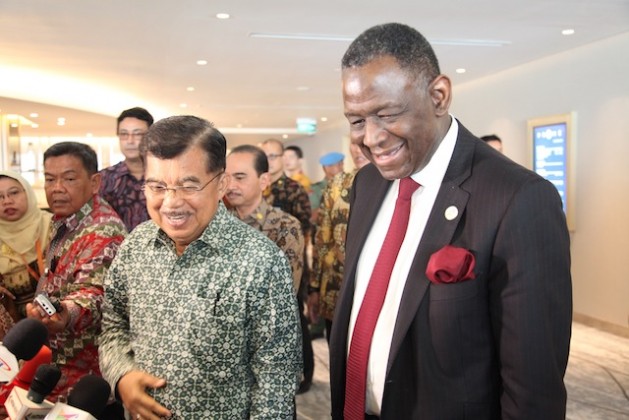 Indonesian Vice President Jusuf Kalla and UNFPA Executive Director Dr. Babatunde Osotimehin discussed how Indonesia could harness its demographic dividend on the sidelines of the World Economic Forum on East Asia in Jakarta on Apr. 20. Credit: Courtesy of UNFPA Indonesia.

JAKARATA, May 2 2015 (IPS) - In a populous archipelago nation like Indonesia, where 250 million live spread across some 17,500 islands, speaking over 300 languages, the question of development is a tricky one.

A lower-middle-income country with a poverty rate of 11.4 percent – with a further 65 million people living just below the poverty line – the government is forced to make tough choices between where to invest limited funds: education or health, job creation or infrastructure development?

A demographic dividend arises when a high ratio of working people relative to population size frees up resources for private and public investment in human and physical capital.
These issues are further complicated by the fact that over 62 percent of the population – about 153 million people – lives in rural areas, largely cut off from easy access to hospitals, schools and job markets outside of the agricultural sector. About 27 percent of this population, roughly 66.1 million people, are women of reproductive age.

In addition, Indonesia currently has the highest rate of working-age people that it has ever had, both in absolute numbers – with 157 million potential workers – and as a proportion of the total population – accounting for 66 percent of all Indonesians.

While this puts a huge strain on the government to provide jobs, it also offers the country a chance to reap the benefits of its demographic dividend, defined by the International Labour Organisation (ILO) as a period in which the rising number of working people relative to population size frees up resources for private and public investment in human and physical capital.

This, in turn, allows the country to achieve far higher rates of income per capita, thus boosting the national economy.

At the recently concluded World Economic Forum on East Asia, which ran from Apr. 19-21 in Indonesia’s capital, Jakarta, experts from around the world urged the country to capitalise on its demographic dividend by investing heavily in its own people.

Among the nearly 700 participants in the conference was the executive director of the United Nations Population Fund (UNFPA), former Nigerian Health Minister Dr. Babatunde Osotimehin, who stressed throughout his three-day visit that “people need to be at the centre of development.”

While this may seem a simple recipe, it bears repeating in Indonesia, where half of the population falls into the ‘youth’ category (15-24 years), a demographic that also has one of the highest unemployment rates in the country.

With Indonesia’s population set to increase by 19 percent, to about 293 million people by 2030, according to the UNFPA, the country would be well advised to heed the words of population experts.

In the midst of his whirlwind visit to Jakarta, Osotimehin sat down with IPS to discuss how Indonesia can harness the potential of its people, and to share some strategies on how the young democracy can optimise on changing population dynamics.

Q: Where is Indonesia in terms of its demographic dividend?

A: Indonesia needs to take advantage of its demographic window of opportunity, which is expected to peak between 2020 and 2030. I think that there is the consciousness in Indonesia that this [demographic dividend] is an important national planning process, which they must invest in.

I believe that Indonesia has both the analytics and the political commitment, but I believe that going forward, we will have to encourage Indonesia to investment [strategically] for the demographic dividend to succeed.

Q: What kinds of investments need to be made?

A: Investments in health, youth education and employment need to be scaled up considerably. I think that social systems need strengthening – we need to address the issue of early marriage and make sure that girls are allowed to go to school, stay in school and reach maturity. We want to make sure that girls and women can make choices for themselves going forward, that is a key point.

Every young person must be taught about themselves and their bodies, and every woman needs to have access to voluntary family planning and sexual reproductive health services so that they are empowered to make choices. Having comprehensive sexuality education would ensure that we could reduce things like HIV infections, sexually transmitted infections and teenage pregnancies.

I think that within the educational framework we also want a situation where the curriculum is diversified so that we can encourage vocational training and entrepreneurship training. We need to be able to inspire small and medium-sized enterprises, which usually form the basis of a thriving economy.

Q: Why is it particularly important for Indonesia to focus on young people?

A: It’s important for Indonesia to invest in young people for many reasons. It gives a sense of belonging [for] a young person and it ensures that they can participate in national development. Young people will be part of the demographic transition and fertility reduction needs to include them. So really, they have to be part of the process.

Once you realise the potential of young people and they enter employment they are then able to save and earn, which in turn will help the economy grow.

Q: Is Indonesia moving in the right direction?

I think Indonesia has always had some of the necessary policies in place; they just need to be revitalised. New investments and political leadership have to come into it.

I think this new government is committed to bringing it back and I hear from discussions with various government leaders that this is something that they are paying close attention to.

Indonesia should also consider working with the private sector to help create decent jobs. Making sure that everybody, from the youth to the elderly, has social protection that provides basic [services] will be most important.