NEW YORK, Dec 6 2011 (IPS) - A new book on the influential New York Times columnist Thomas Friedman sets out to debunk his hawkish, neoliberal views, accusing him of overt racism, factual errors and skewed judgments on issues ranging from the U.S. invasion of Iraq to the Israeli-Palestinian conflict. 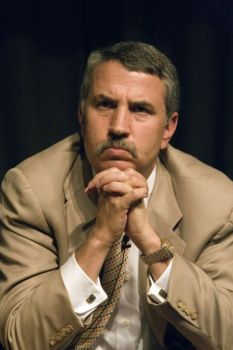 Deconstructing one of the country’s highest-paid journalists, Belen Fernandez’s “The Imperial Messenger: Thomas Friedman at Work” presents a comprehensive overview of the man – and three-time Pulitzer Prize winner – she describes as “characterised by a reduction of complex international phenomena to simplistic rhetoric and theorems that rarely withstand the test of reality”.

Fernandez, 29, admits that prior to 2009 she wasn’t too familiar with the work of the foreign affairs columnist. It wasn’t until that summer she decided to analyse Friedman’s work after reading “a sequence of ridiculous articles”.

Finding it difficult to “cram all of that incompetence into a concise book”, Fernandez divided the content into three issues that “most enraged” her, analysing his work along with a brief examination of the shortcomings of the U.S. media.

“The Imperial Messenger” looks at Friedman’s obsession with U.S. global dominance, his Orientalism vis-à-vis the Arab/Muslim world, and his special relationship with Israel.

It took her just over a year, working as an editor and feature writer at Pulse Media, in which she read every column he had written since 1995 three times. She also read a selection of his articles that were free to access from the New York Times archive, from 1981 to 1995.

The final product, written in a punchy and often sarcastic tone, offers a concise overview that is accessible even for those who aren’t familiar with Friedman’s work.

Fernandez explained that the first chapter, “America”, incorporates Friedman’s “cheerleading of punitive economic systems at home and abroad” while the “Special Relationship” chapter delves into the inconsistencies of his persona as a serious critic of the Jewish state.

“His criticism, of course, is limited to intermittently encouraging the Israelis to slightly curtail settlements,” Fernandez told IPS. “Not because he cares about the plight of non-settlers, but because he wants to avoid a situation in which Palestinians demand equal rights in a multiethnic democracy.”

As an example, Fernandez cites his advocacy of the war in Iraq “to create a free, open and progressive model in the heart of the Arab/Muslim world to promote the ideas of tolerance, pluralism and democratisation”.

She says Friedman wrote this after having said in 2002 that “unless the U.S. encourage(s) alternative energies that will slowly bring the price of oil down and force Arab/Muslim countries to open up and adapt to modernity – we can invade Iraq once a week and it’s not going to unleash democracy in the Arab world.”

In the same year, Friedman classifies the invasion of Iraq as “the most important task worth doing and worth debating”, even while admitting that it “would be a huge, long, costly task – if it is doable at all, and I am not embarrassed to say that I don’t know if it is.”

In the “Arab/Muslim World” chapter, she quotes Friedman as concluding that the “short answer” for why the U.S. invaded Iraq and Afghanistan in response to 9/11 “is because Pakistan has nukes that we fear and Saudi Arabia has oil that we crave”.

Fernandez notes that Friedman is never forced to formally retreat or even informally amend offensive and racist statements, meanwhile diverting attention from the role of Israel in generating regional rage by accusing the Palestinians of “a collective madness”.

Friedman’s power and freedom to express his views is made evident when Fernandez describes the latitude granted him by the New York Times. Take this excerpt:

“Readers of Friedman’s column are often reminded that New York Times columnists are not permitted to endorse U.S. presidential candidates. The blatant endorsement of war crimes like collective punishment, however, is apparently less polemical, even when columnists cannot keep track of their own reasons for said punishment.

“In separate reflections on the war with Serbia published two months apart in 1999, Friedman writes in the former that ‘once the (Kosovar) refugee evictions began… using a huge air war for a limited objective was the only thing that made sense.’ He then adds that he may indeed understand the true sequence of events: NATO bombed, and (Slobodan) Milosevic began ruthlessly killing and evicting Kosovar Albanians.”

Whatever the reader’s political bent, “The Imperial Messenger” raises thought-provoking questions about the objectivity of mainstream media when it comes to U.S. economic and foreign policy interests.

After stripping down columns, articles and his books, Fernandez said her perception of Friedman worsened from beginning to end.

“I realised how truly criminal his behaviour is, whereas before I had thought of him more as a somewhat amusing purveyor of mixed metaphors who had by accident ascended to the post of New York Times foreign affairs columnist,” she told IPS.

“The New York Times is totally complicit in Friedman’s crimes, just as it was complicit in selling the whole business of the Iraq war. The degenerate state of the mainstream media, which actively sides with corporate profit over human life, is simply a testament to the importance of alternative media outlets.”